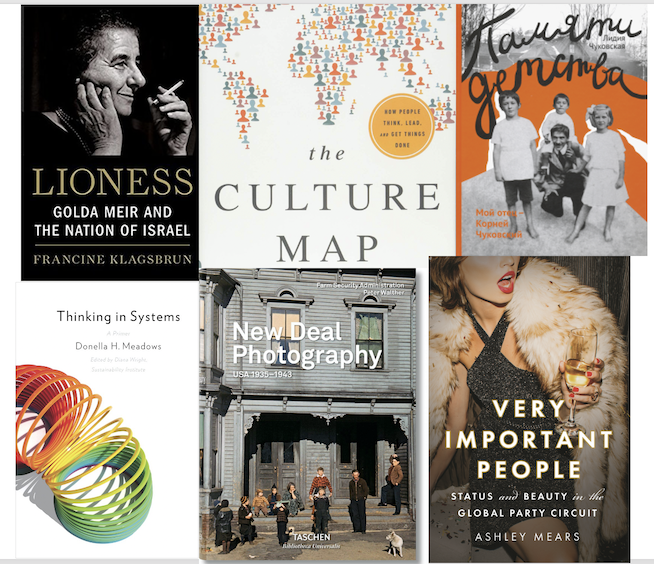 Reading was really hard going in 2020. I was home with two kids of a good chunk of the year and worried that the world was ending the rest of the time. When I did read, I wanted to read things where people who were competent solved problems. I didn’t want to read about (unattainable) travel or anything that felt like life moving foward, and I didn’t want to read anything about the apocalypse. So it was a slog.

I didn’t even meet half of my reading challenge.

All that said, here were my favorites for the year.

New Deal Photography by Taschen Press - Is it cheating to make my first book a photography book? I bought this at Barnes and Noble in January 2020, the last time I was at a physical bookstore, and got this unassuming volume on super discount. It showcases the work of the United States Farm Security Administration’s photography program, which hired a number of photographers to go out and take pictures of America. You can see all the pictures on the website, but the book does a great job talking about the historical context, the way the photographers worked, and then getting out of the way and letting you reflect on the pictures. I might have to now buy more photography books.

Thinking in Systems by Donella Meadows I am huge, huge on systems thinking and I strongly believe that, in today’s world, it’s the only way to navigate the news and explain what’s happening. In tech, especially, understanding how systems work is an absolute must. This book does an amazing job creating a framework helping readers understand how to think about a system, its inputs, what changes act upon it, and its outputs, and apply that mental model to things in the real world.

The Culture Map by Erin Myer - I read this right around the time I started working at Automattic, which is not only a distributed company, but also international in nature. To date, although I’ve worked with any number of different people, I’d worked predominantly in an American business culture.

This book, while overgeneralizing at times, has a good basis for understanding how different business cultures perceive, for example, punctuality, the ability of everyone to participate in decisions and reach consensus, and a lot more. The main takeaway is that different things matter in different business cultures and even just understanding that fact will help you communicate more clearly. I’ve lost track of the number of times I’ve recommended it this year.

Memories of my Childhood by Lidya Chukovsky - Kornei Chukovsky is arguably the most beloved Russian children’s author of the last 100 years and has been in heavy rotation at our house as we raise (now two!) young kids to be Russian speakers.

But when he wasn’t writing rhyming books for toddlers, he was a very serious literary critic, caught in the crosshairs of politics in the after-revolution years, carrying a very heavy mental load. Here, his daughter, Lidya, writes about what it was like to grow up with one of the premier literary giants of the Russian 20th century. Only, he wasn’t that for her, he was a dad, to her and her two brothers, and they grew up sailing in the Baltic Sea, climbing, reading, and going on adventures. She writes with love and reverence, but notes at the beginning of the book, “Everything in this book is true, but it is not the whole truth”, and I’ve been thinking about that phrase for a long time.

Very Important People by Ashley Mears - I’m not going to lie, I bought this book exclusively because of its cover, but man was it good. So, so good. It talks about the economy of club life, the role of women in it, how society props up this economy, how women both benefit and suffer as a result of it, and of course, about hip people at clubs. Strong recommend.

Lionness - Golda Meir and the Nation of Israel by Francine Klagsbrun - I’ve read a ton about Golda Meir at this point, but most of it has been overwhelmingly positive. What I love about this book is that it describes the enormous role that Meir had in Israeli politics and all the difficulties she overcame, while at the same time also acknowledging that she was a very difficult person herself, had a lot of imperfections, and made a lot of very hard tradeoffs (never seeing her family, having a bad relationship with her ex-husband, leaving her parents behind in America, ignoring the Israeli feminism movement and sacrificing her health) to get to the top. It also really describes the kind of qualities that are important in a leader, much better than any business book I’ve read.