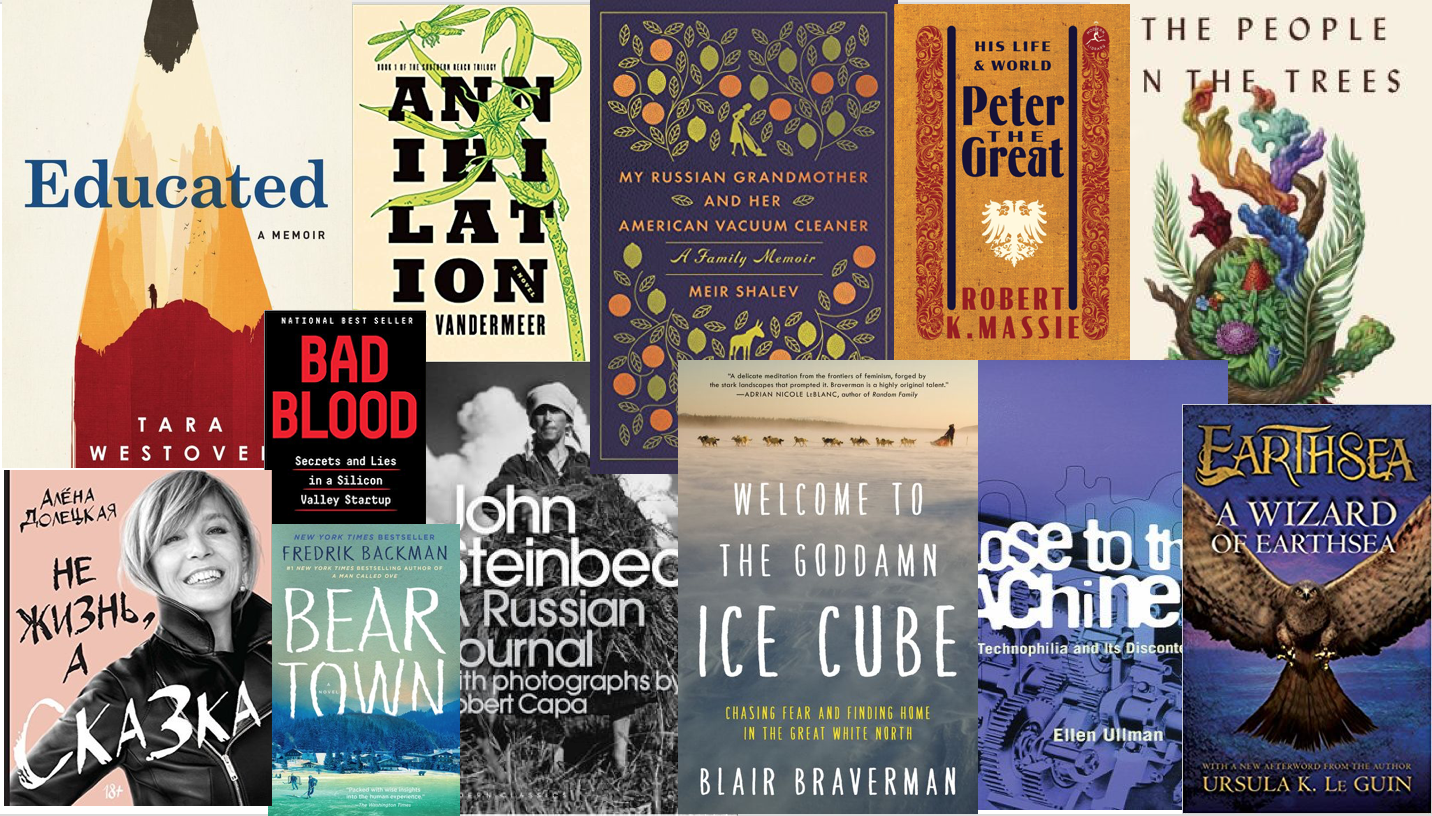 This year, in reading, I was looking for an escape in great writing. It didn’t matter to me whether the writing was fiction or non-fiction, it needed to transport and inspire me. I read nearly 70 books, and for some reason, I had to put down quite a few of them because they weren’t getting to the point. Here are my favorites.

It seems like everyone’s been talking about this book, and for good reason. I honestly wouldn’t be surprised if it winds up that some of the facts in the book have been exaggerated to fit a narrative, so unbelievable was it to me when I read it. The story of going from living, uneducated, on a mountain, to an Ivy League school is nothing short of breathtaking. But to me, it’s also more than that - it’s about what family means, and how to unlearn what they’ve taught you about the world in order to find yourself. An extremely compelling read.

I read this in one sitting on a plane and it was just as good as Shoe Dog, which I loved last year. Again, the narrative here is, how do you convince yourself what the truth is, and how do you lead other people according to that mission? What was Elizabeth really thinking? We’ll never know for sure.

I remember the original glowing stories in the press about Theranos, and this book just made me more cynical about everything presented to me as technical journalism. In a way, the part where Carreyrou describes the Wall Street Journal’s negoatiations with Theranos regarding press are more interesting than the story itself in revealing the business of journalism.

I read this as an audibook (in Russian only, unfortunately) and it was an absolute pleasure that I had to relisten to again and again. Doletsakaya is an extremely colorful, warm, sharp, and witty personality - all the traits necessary to start up and run Russian Vogue, which she did in the late 1990s.

Her stories about how to run a Western magazine in the heart of Eastern Europe, about her semi-famous family (her father was a renowned childrens’ pediatrician in the Soviet Union and her uncle was Yuriy Nikulin, the famous Soviet actor and clown,) are both hilarious, sharp, and heartbreaking at times.

Her profile of Naomi Campbell in Russia is honestly one of the best celebrity takes I’ve read. If you read Russian, do yourself a favor and read this book.

I read the initial book at the end of 2017 and continued with the other two in the trilogy at the beginning of the year. The first two are the strongest, the third is just pure WTF. But Vandermeer is such an engaging writer in building the creepy atmosphere that you can’t stop thinking about all the grotesque semi-horrors that he invents. There are a lot of unusual things about these books, the most intersting one being that the first one is narrated by four female characters.This fact is not emphasized or played up in any way, which makes it even more perfect. By the way, if anyone has read this and genuinely understands what Area X is, please DM me because I’m dying to know. Skip the movie.

My Russian Grandmother and Her American Vacuum Cleaner by Meir Shalev

Meir Shalev is a prominent writer in Israel, having won many awards and honors. This is a beautiful memoir of his childhood, growing up in one of the prominent pioneer Zionist families that first came to Palestine, and, mostly, of his grandmother, who was extremely prickly, hard to love, but also held the family - and all of the dust that came into their house in the Jezreel Valley - on her shoulders.

Read for the elegant, humorous, almost dream-like prose, and also for the beautiful snapshot of Israel as it was in the early days of its youth.

Welcome to the Goddamn Ice Cube by Blair Braverman

I first learned about Blair from her Twitter feed, where she posts a lot of loving stories about her dogs. The book is even better. I knew nothing about dogsledding other than vague descriptions I’d read from Jack London aeons ago, but Blair’s description of the snow, ice, the frosted breath, and the endless nights near the Arctic Circle in Norway (but also in Alaska,) made me want to experience it for myself.

Peter the Great: His Life and World by Robert K. Massie

Sometimes you just need to read a big-ass history book. I took this 900-pager with me to an all-inclusive resort in Mexico, and I did not regret a single moment I spent cuddled in an easy chair near the pool, engaged in Peter’s world. Massie manages to weave a narrative from thousands of documents. He breathes to live the old boyar life of Russia when Peter was born, and chronicles both the growth of the country and the czar throughout the entire course of his life.

It’s meaty, long on personal descriptions and gossip, and has a plot. The only small minus is way, way too much time spent on military campaigns, but, after all, Peter did spend most of his time on earth fighting his way through life.

Close to the Machine by Ellen Ullman

We’ve had quite a year in tech lately. All of a sudden, it seems, people have discovered that technology is not magic, and will not offer any instant solutions. Ellen Ullman has been thinking about what technology means for over two decades with compassion, humor, historical context, and life experience. This book made me wish it was required reading before sitting down in front of an editor.

The People in the Trees by Haniya Yanagihara

This book just plain dumb blew me away. There is no other way to say it. This is a Novel. Yanagihara created an entire universe, a character who you hate but also can’t help but feel sorry for, a moral dilemma that has you wondering what you would do in the narrator’s shoes, and has wrought a sparkling Pacific culture almost rom the ground up. Please read this book to recognize the true power of writing.

A Wizard of Earthsea by Ursula K. Le Guin

I came to Le Guin very late, but damn was this book good. Real good. You can see the influence on Harry Potter and hundreds of other childrens’ books. This is a book for children, but it is not written to talk down to them. It speaks to all of us, and what it means to be human.

I had no idea I was interested in hockey until I read this novel about small town Scandinavian life that revolves around a hockey team that’s the town’s only hope of survival. Extremely readable and extremely human.

A Russian Journal by John Steinbeck

It’s obvious that Steinbeck is a good writer, but you don’t really know for sure until a writer writes about something that you know a lot about. A Russian Journal is Steinbeck’s frustrated attempt to get past the sensationalism of Russia in the headlines (sound familiar?) 50+ years ago, and report honestly on what he sees there.