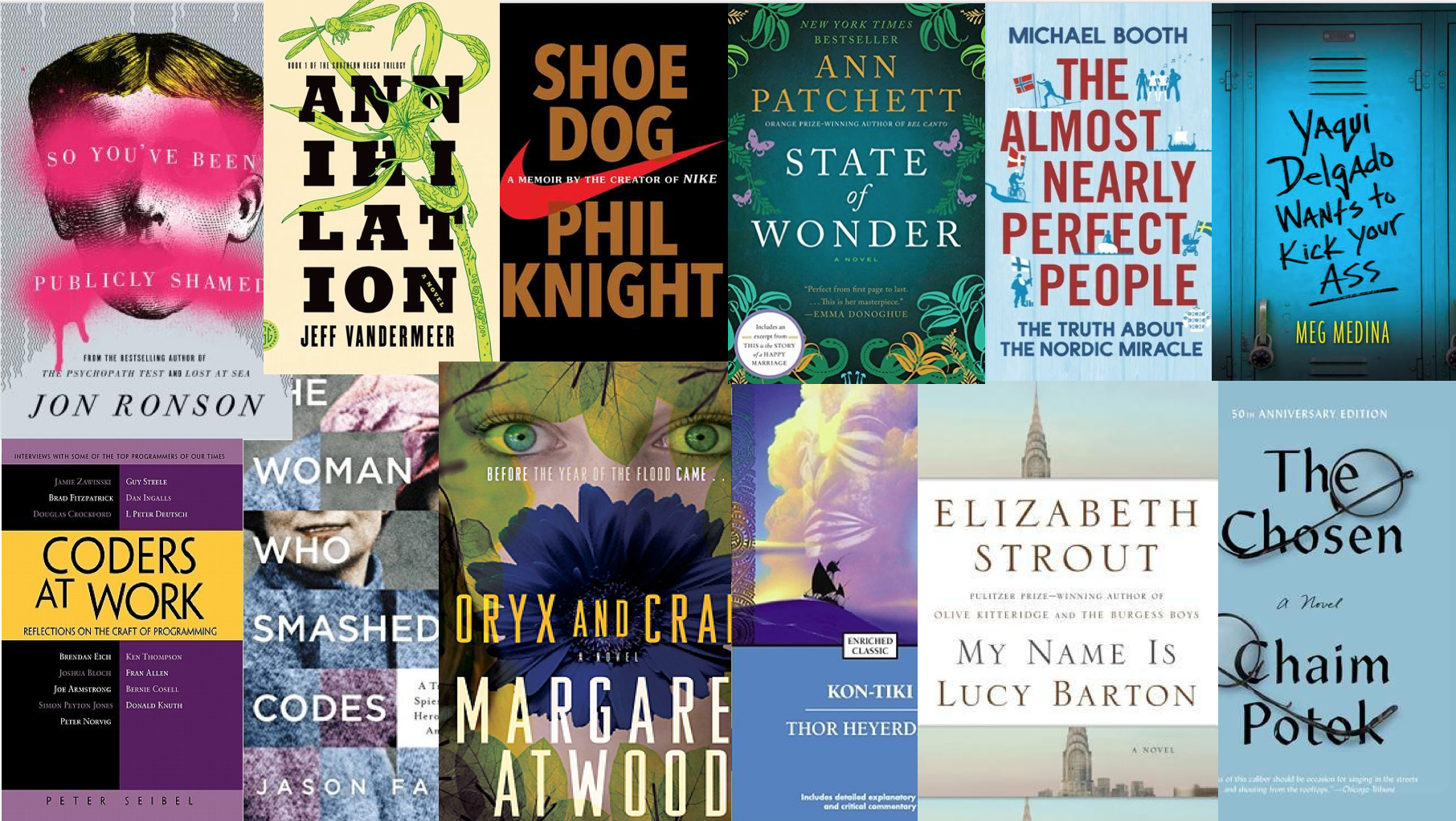 Every year, it seems like the books I read are completely random. But, what I’ve learned over time is that I love books that teach me something about the invisible systems that govern how the world works.

My first revelation was many years ago, when I first read Confessions of an Economic Hitman and understood better how international financial systems really work under the covers. Ever since then, I’ve been on the look out for both fiction and non-fiction books that peel back the curtain and show the world for what it really is.

I finished 53 books this year, and here are the ones I loved most:

The Kon-Tiki Expedition: By Raft Across the South Seas by Thor Heyerdahl This year, after watching Moana, I couldn’t get enough of Polynesian navigational culture. They navigated enormous swaths of ocean and memorized entire current systems using nothing more than their hands and stick memory aids. I’d heard of Kon-Tiki before, probably but it surfaced as a book that explored the same concepts of Polynesian navigation in a modern framework.

More than that, it’s an amazing travel book, and a testament to what the human spirit can achieve under extreme limitations. I devoured both this book, and the accompanying 1950s film (which can be found on YouTube.)

The Chosen by Chaim Potok Every year, I make it a point to try to read some classics that I missed in school, and, finding The Chosen on sale at the bookstore near the beach, I picked it up. Mountains of essays have been written about this book, so there’s not much I can add to its appraisal, except that the genius of it, is its simplicity. You come away feeling like someone has gently explained two sides of what you thought was a one-sided sitaution. What I love most about this book is that there is no self-effacing irony or sarcasm, only strong, good writing.

Shoe Dog by Phil Knight After Bill Gates recommended this book last year, I picked it up, and could not put it down. It’s an amazing look at what it actually takes to start a business, including long, hard hours, bribes, deception, and sacrificing not only your own time, but the time of others. By the time I was done reading, I absolutely loathed Phil Knight, his business practices, ethics, and personally will never buy Nike again. But damn, is he a good writer and tells an amazing story, no doubt one that will be mandatory reading in MBA programs for a long time to come.

Oryx and Crake by Margaret Atwood I’ve only read Atwood’s Handmaid’s Tale before, which I considered as fundamental to my understanding of the world as 1984. After how good that was, I was reluctant to venture any further into her fiction because I was terrified it would be no good. She managed to prove me completely wrong, and I have been thinking about this novel, which deals with speculative ecological disaster, all year. I usually hate books that have a Message, and especially books about the apocalypse, but this book is so different, and so relevant to our time today that I can’t help but think of it any time I read the news.

Annihilation by Jeff Vandermeer As a companion book to Oryx and Crake, this was an amazing, short, compelling read that I picked up on the last day of the year and finished the same day. Apparently it’s coming out as a movie in 2018, but based on the trailer, the better idea is to ignore the movie entirely and dive into the immersive, sparse, intense, psychologically-thrilling book that talks about a biologist’s foray into Area X, an Apocalypse-Now like zone where nothing and everything is real.

State of Wonder by Anne Patchett If you’re looking to fully immerse yourself in tropical mystery and heat, read this after Annihilation and Oryx and Crake. Anne Patchett is one of my favorite newer authors, and here she tells the story of a scientist who ventures into the Amazon to find out what happened to a disappeared colleague, in the process uncovering some truths about herself and the future of humanity. One of those books that makes you think for a while after you finish it.

Coders at Work by Peter Seibel As I’ve gotten deeper into software development, I’ve been reading a lot more about the process of writing code, and this one is always recommended as a classic. Although it’s a bit older at this point, I wouldn’t use the word “dated.” It interviews a number of the giants of software development in the same way that The New Yorker has a series of books interviewing writers, and it is a true gem. More than just giving insights into how developers work, it’s a cultural snapshot of the roots of many companies and software development culutres we now think as established.

So You’ve Been Publicly Shamed by Jon Ronson 2016 has been a pretty terrible year for tech. As someone who’s been interested in the negative aspects of consumer tech for a long time, however, it’s been pretty great. I got this book by way of Mark Hurst, who runs Skeptech, critically examining our current pbulic online life. This book is a must-read for anyone who conducts public life online, especially on Twitter. It examines the mob mentality that has so gripped the internet of late, what’s behind it, and what people who have been subjected to it go through. It’s like an owner’s manual for feelings online. A bit uneven and bumpy at times, mostly a compelling, gripping, fair read of what life on the internet is like for all of us.

The Woman who Smashed Codes by Jason Fagone I got a copy of this book when it was still in ARC form, and I knew then that it would be huge (it’s since gone on to be optioned for televsion and written up by NPR, New York Times, and others.) It tells the story of an extraordinary woman in extraordinary times. There is so much to think about in this book. Cryptography, women in the workforce, the start of the NSA, World War 1, World War 2, privacy, work, marriage, partnership, humanity, what it means to leave behind a legacy, the dignity of intellectual work, motherhood - and so, so much more.

It’s a dense read, but today, as we grapple with what it means to be human and to entrust our privacy to machines, and in an era of intense debate about the role of women in technology, it’s an important read that adds a lot of historical context to the growing rise of the surveillance-industrial complex and the people with good intentions who started it. It’s marketed as the same vein as Hidden Figures as a story about women’s fight to gain equality in the workplace, and it does that, but it’s also lot more complicated than that, and the author deftly covers a breadth of topics, including a detailed description of cryptography, especially during World War II.

The Almost Nearly Perfect People by Michael Booth This year, like everyone else in the continental United states, I went to Iceland and it deeply impacted me. After I got back, I wanted to read everything about Scandinavia to understand why Iceland and Scandinavian economics work, and the United States doesn’t. Luckily I didn’t have to, because this book does an amazing job consolidating each country into an interesting, funny, and intelligent narrative. Reading it is like if you were touring the region with someone from the Economist.

My Name is Lucy Barton by Elizabeth Strout A short, quiet novel about fundamental truths. I read it in one sitting on a flight from Charlotte to Philly. Every page has a quote that makes you go, “Yes, this is how life works.” It is not sappy or overwrought. It is the true story of the human condition as it is.

Yaqui Delgado Wants to Kick Your Ass by By Meg Medina Purchased solely for the title, was not disappointed. Really great YA (which I don’t read a lot of.)