What Hidden Figures means to me 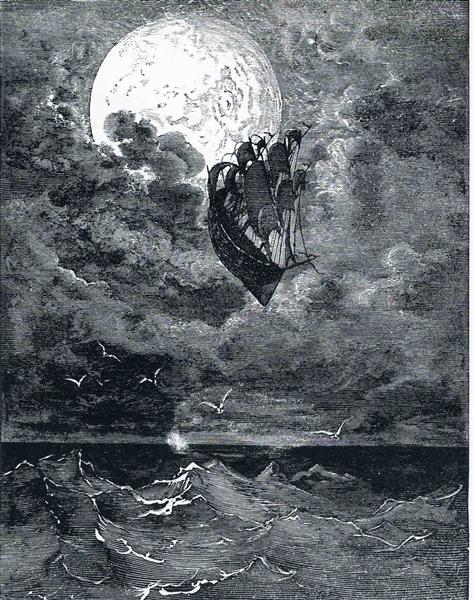 Lately, I’ve been waking up with a low-level anxiety that doesn’t seem to go away. Granted, I am Russian — and I do wake up every day scrolling through Twitter — but the combination of the news, the grind of everyday life as a working professional with a toddler braving out her first winter in the germ haven that is daycare, and the national mood have made me feel that there is an electric undercurrent of stress constantly percolating under the surface of my life.

So I’d really been looking forward to see Hidden Figures. And, judging by the box office data, so had a lot of other people. What about this movie was so good? After all, it’s rated PG, which automatically means Disney-fied. It follows a pretty formulaic plot of protagonists struggling against the system and succeeding in the end. It glosses over all the tedious work the women did of just sitting and solving hard problems in favor of cinematic drama, and it has a bunch of stilted inspirational dialogue, such as when Kevin Costner’s character tells Katharine Johnson (played by Taraji P. Henson) that, “Here at NASA we all pee the same color.”

But I found myself more than willing to overlook all of that, because the movie meant so much to me on a bunch of different levels. 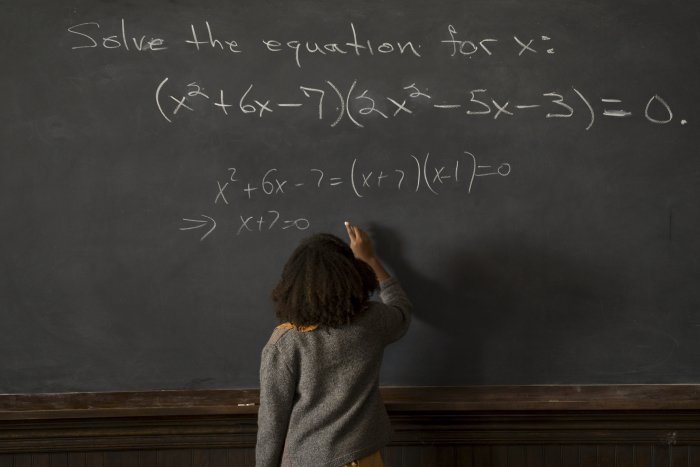 First, it meant a lot to me as a woman in technology. My career path has been an absolute cakewalk compared to what Katherine Johnson, Mary Jackson, and Dorothy Vaughan had to go through as black women growing up in the South after World War II (although, in the book the movie was based on Katherine Johnson states that she “didn’t feel the level of segregation at NASA”.)

But, it still hasn’t been easy. Like most girls born to immigrant parents, I spent my whole academic life trying harder than anyone just to feel that I was as good as everyone.

In high school, I would sit down to do homework at five and not get up until ten. On the nights before tests or when projects were due, I would work until 11, then lay down on the couch with the light still on so that I wouldn’t go into deep REM sleep. I set an alarm for three in the morning so I could continue working with at least a relatively fresh mind.

My desk faced our backyard, and I would glance up as the last slivers of light moved over the patio furniture, the shouts of the neighboring kids dying out as they went inside to dinner. I would hear the familiar, comforting drone of the television below as my parents relaxed after work.

Then, after a while, either my mom or dad would softly open the door. “You should go to bed,” they would say as I rubbed my eyes, surrounded by chemistry worksheets, world history papers, and algebra flashcards, all blurring together in a bottomless pile on the desk.

Two things kept me going in those mind numbingly long hours of worksheets and memorization. The first was a Longfellow poem I’d seen somewhere online:

“The heights by great men reached and kept
Were not obtained by sudden flight,
But they, while their companions slept,
Were toiling upwards in the night.”

which I put as the away message in AOL Instant Messenger. Not that I needed it anyway. As I worked, most of my friends had already set themselves to idle for hours, long asleep.

The second was “Ad astra per aspera”, one of a series of a Latin sententiae that our teacher gave us to translate and memorize.

It means, “to the stars through difficulty,” and has been my guiding motto ever since, all throughout my all-nighters in college, in my first job, where I was afraid to negotiate for $2,000 more as a starting salary and gnawed my nails while I waited for a response from the company, in jobs where I had to fight to be allowed to learn new technology, to fight to earn just as much money as my male coworkers, to fight to present the work I put together, to fight for longer maternity leave. Then, I fought sleep deprivation while bottle-feeding my daughter at four in the morning and performing a full day’s work starting at nine.

My current fight is to be able to spend as much time with my child as I possibly can, still continue to grow in my career, make soup every Saturday, and have time to daydream about writing blog posts. I get a lot of help, but none of this is extremely easy in the least, and Hidden Figures is one of the last movies in recent memory that portrays the struggle of working women in a way that’s not slapstick funny or juxtaposed with some crazy romantic plot. It portrays them as they are. “Call your wives and tell them you’re coming home after dinner,” Kevin Costner addresses Johnson’s team as everyone rushes to their telephones, including Katherine, who is, as a single mother, calling her mother, while the viewer is acutely aware of how unaware Costner is of any family dynamic outside of the nuclear norms of 1950s suburban America.

Second, it’s meant a lot to me personally as someone who’s recently found the moon. 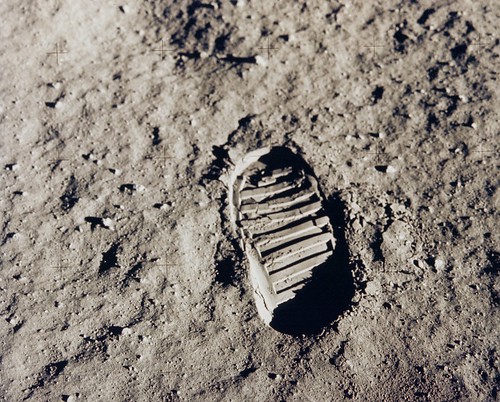 I mean, obviously, the moon’s been there all along. But this idea that the moon represents the peak of human achievement, the beauty of what it meant to wonder about the stars, and the perspective of a world much larger than whatever daily sensational clickbait we’re getting, only came to me recently.

Last summer, I finished reading The Martian, which describes how astronaut Mark Watney survives Mars, mainly through his unceasing optimism, resourcefulness, his distinctly American grit, and a lot of potatoes. And like countless other people who made the book a bestseller, I was captivated by the narrative that one resourceful person could survive on his own on the ultimate edge of civilization.

Around the same time, Mr. B and I also watched The Last Man on the Moon, a documentary,about Gene Cernan, the eleventh person to walk on the moon, and the Apollo missions. 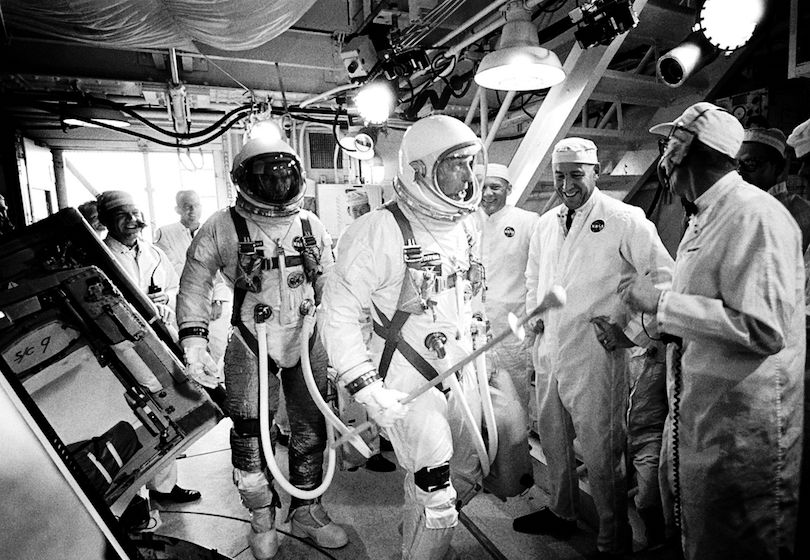 Something about that individualism standing on the shoulders of decades of the hardest scientific work mankind had ever done really captivated me about the book. That feeling carried over to the documentary. Just imagining what it must have taken to be one of the first humans to fly something that had never been built before, based on calculations that had never previously been done, in a mission that was not guaranteed to succeed, struck at the heart of my humanity.

I started reading more about the moon, about Apollo 11, about the technology and the people behind the drive into space. I watched and re-watched the moon landings, my heart pounding each time the lunar module came closer to the surface. I felt what I imagine Homer in October Sky did, when he saw Sputnik race across the sky.

“Any sufficiently advanced technology is indistinguishable from magic,” Arthur Clarke said, and to me, it was.

For as long as humans have existed, we’ve been groundlings. Then, all of a sudden, we were up in the massive immensity of the stars in a tiny, fragile metal cylinder. I still don’t think I can fully process in my mind how amazing that is, and how many people, including the three heroines of Hidden Figures, worked for how long to get us there. 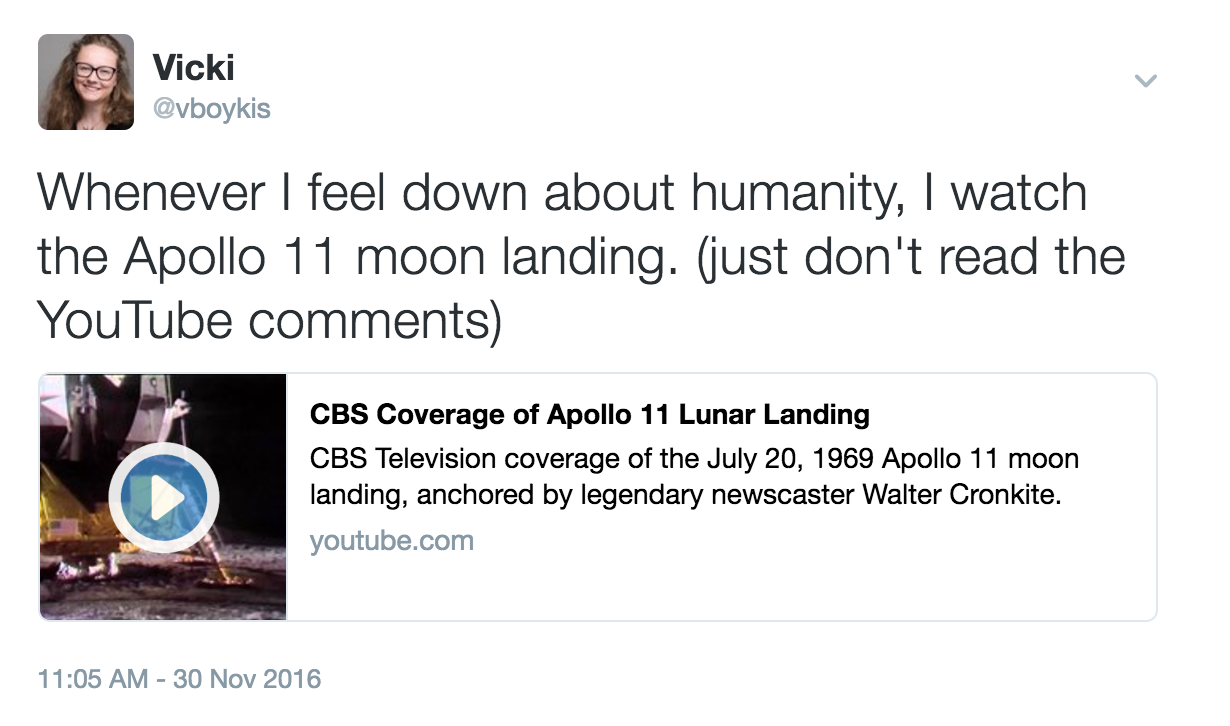 As my interest ramped up, for Halloween, I dressed the toddler up as Valentina Tereshkova. Seeing how obsessed I was becoming with space a friend bought her a beautiful bracelet that had the planets on it, and she grabbed it, running each bead-planet through her hands, almost like a rosary, slowly memorizing the names as she went.

My fever caught on, and several weeks later, I heard her in her in her crib, wishing a good morning to Jupiter and Neptune. She’s since been surrounded by planet books, a children’s projector that shows slides of the Milky Way, and hundreds of attempted hand-drawn renditions of Jupiter’s Great Red Spot.

A funny thing happened when my daughter became interested in space: the moon stopped being something that was solely mine, and now something that was hers, as well. Whereas before I was thinking of individual human accomplishment, I now understood it in the larger context of what it meant for America to never have gone to the moon in either my lifetime, or hers.

Which brings me to the third way that Hidden Figures has brought me meaning: for me as an American, it meant a great deal. 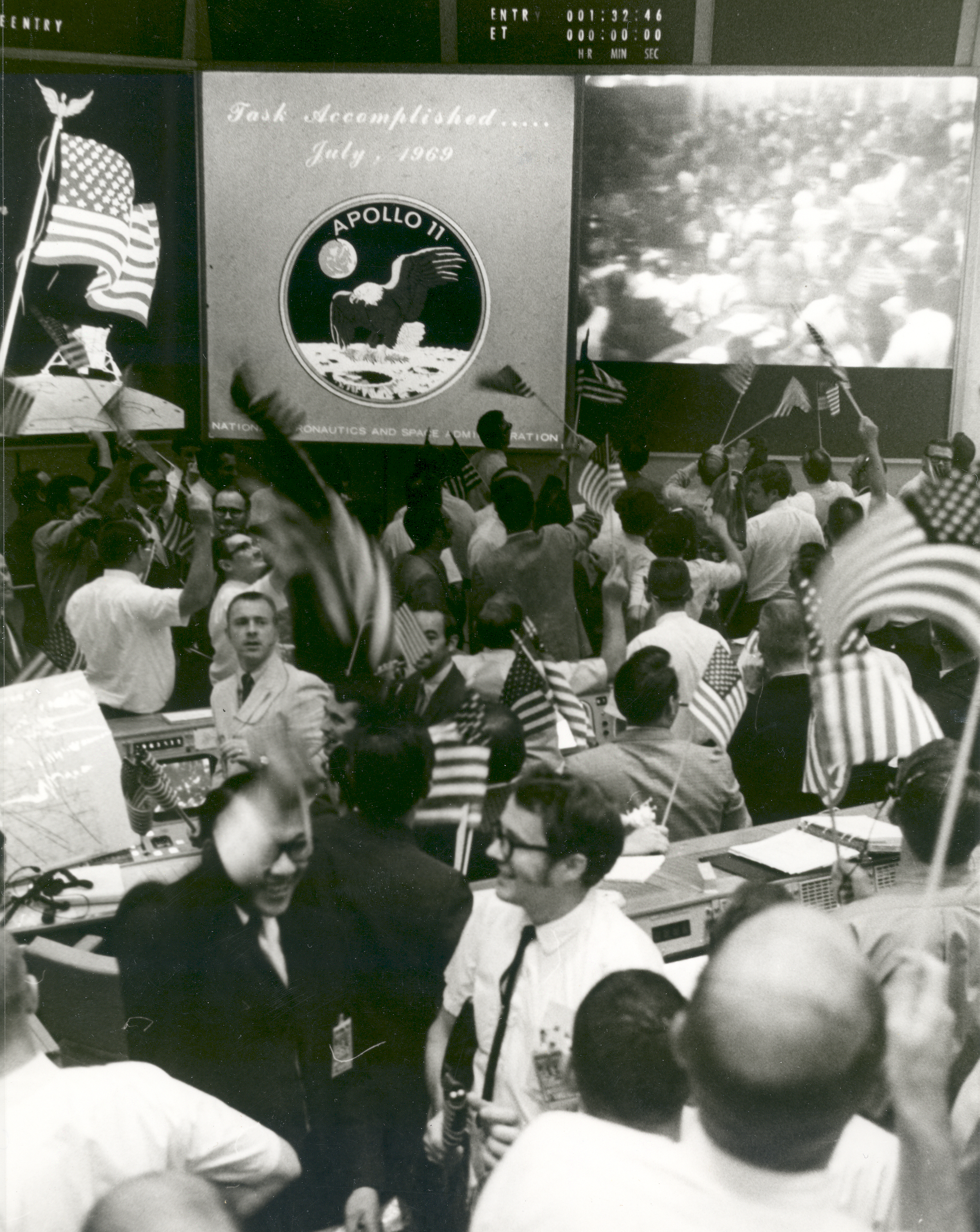 There is something about having children that makes you very vulnerable, very scared for the future. And I imagined the next generation of Americans feeling that America is a place that, instead of placing people on the moon, is known for practicing democracy in the dark, and I became disappointed.

I thought about what a huge shame it was that we were wasting so much energy, emotion, and money on political bullshit, when we could be spending it going to the moon again.

I recently had coffee with a developer who was nine or ten when we landed on the moon, and had the chance to ask her about my favorite topic. “How was the national mood,” I asked her. “Oh, it was, it was something,” she said. “When they were still doing the Gemini launches, the TV broadcast of Captain Kangaroo would be interrupted and we would watch them go. Then, when we went to the moon…” She paused. “Everyone wanted to be an astronaut. All my Barbies were astronauts. We all wanted to go to space.”

Recently, Mr. B and I were taking a late winter evening walk with the toddler, when the moon came out of the clouds, clear, large and bright. Mr. B looked up at it. “I can’t believe we haven’t been there for years and years,” he said, looking down at our daughter. “I mean, it’s right there. It’s still so close.”

But we haven’t been there, and NASA’s budget, and mindshare in the United States (in spite of all of NASA’S excellent PR efforts), has been wallowing at the bottom . The country continues to be splintered further among political factions, a process that is enabled by social media and terrible clickbait headlines, and I’m not sure how long it will take us to feel like we’re a single country again.

In spite of all of that, I left the the theater feeling illuminated and elevated, like someone had understood all of the anxieties I’d been feeling escalating over the past year and poured something warm and comforting over them. Hidden Figures is the movie I personally needed.

Hidden Figures is the movie the country needs today, too, because it’s about what happens when we set a goal as a country. It’s about inspiring our children to collectively take on the challenge of the moon, or at least, one as big as the moon, again.

It is about showing mainstream America what it means to succeed as a minority woman in technology, and it’s about and what benefits a country gains from everyone’s contributions are finally taken equally.

And finally, for me, it was about the feeling of watching Sputnik race across the sky, or watching the Lunar Module coast across the lunar surface. The feeling of remarkable progress in the face of a vast, consuming darkness. It’s about what it means to understand that we are tiny, tiny human specks, just trying to get to the stars.

The night after I saw the movie, I finally slept well. I didn’t check Twitter in the morning.