Some time ago, I upgraded to an iPhone because my old phone was too small to store more than 400 photos and 39 videos of my daughter at a time. This isn’t important to the story, or maybe it is.

I find iOS extremely annoying and clunky compared to Android, but the Apple store has a much better app selection for some specific things. In this case, the specific thing was a Russian audio book app, one of the best things that has ever happened to me. As I’ve written before, I’m trying to “read” all the books I missed in my Russian education by listening to them.

One of the authors I missed was Daniil Kharms, and I saw a book by him come up in the app, so I decided to give him a try. To be honest, one of the only reasons I was interested in Kharms is because he shares Mr. B’s first name, one that is not common in the Russian-speaking world. I had also heard about his children’s books, which were beloved in the Soviet Union, but which I’ve never read.

I decided to start with his adult literature first, knowing almost nothing about him, and the first story I listened to was called The story of Sdigr Appr. Just the name of it alone should give you some idea of the contents.

The story starts by two men greeting each other and one stealing the other’s hand and carrying it for some distance. The men go together until the one demands to see a doctor who might also be a professor. The men go to the doctor and the thief gleefully proclaims he won’t give up the hand. The doctor says there’s not much he can do for the handless man, and in the meantime, the thief steals the professor’s ear. This goes on for quite some time until the professor’s wife tries to sew the ear back on, but the professor wants it on his cheek, so there it goes. The play/story finishes with everyone’s ears being stolen. The police are vaguely involved, but they also have their ears stolen.

Here is part of a poem the thief recites at the beginning:

This story, or play, or whatever it was, was the strangest thing I’ve read in a long time. I felt embarrassed that the narrator, who has a good, classic deep Russian voice, had to read this nonsense.

Listening to this story was like trying to understand a modernist painting: I felt ridiculous, stupid, and cynical, all at the same time.

Sense: this person makes none and is possibly insane. 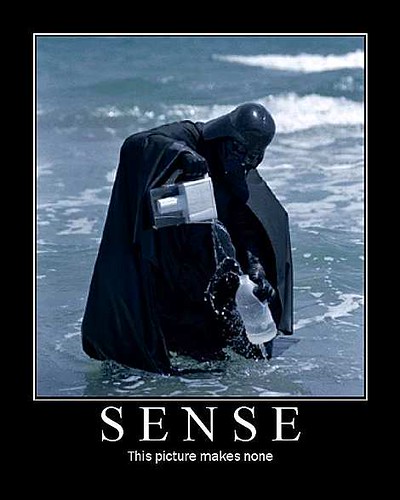 I thought I would stop, but I have never quit a book less than 100 pages in, so I kept going. The next story was about a couple that was having tea with their maid when a double of their maid walks in. The couple’s name is Mama and Papa, even though there is never any mention of children. Mama thinks she sees someone in the window and drinks three shots. Papa convinces here there is no one in the window and even goes outside to prove that no one can look into a window on the third floor. When he comes back, there is a man in the kitchen with a knife. The mother keeps drinking and the two twin maids look at the father with scorn.

All of the stories seem to be culled from some kind of half-nightmare the author has just awoken from, and half the author playing with the audience, like, “See how crazy I am? Try to understand the symbolism in this man not being able to find any striped pants in the entire city of Leningrad.” Even his shore observations and jokes (Kharms kept meticulous notebooks and a diary for most of his life) seem surreal. Did no one really help that police officer who was drowning? Did the whole city come to watch him?

The interesting thing is that, even though the stories make no sense, they are not illogical: they have a beginning, middle, and end, engaging characters, and interesting dialogue. It’s just that the plot twists every two to three sentences, in a direction that is completely unknown.

Ian Frazier writes in a recent review of his work,

It can be hard to explain why I like Kharms’s writing, or why anybody does. His appeal is unique. Joseph Brodsky once quoted Anna Akhmatova, about an improbable Kharms sentence, “Only with Kharms could that ever work. Never with anyone else.

Long after I stopped listening for the day, the words “sdigr appr” stuck in my mind, like a song that wouldn’t leave. Who was Kharms to write this way, simply, cleverly, and yet in a way that was devoid of any kind of reason? As a Russian reviewer of his books writes, “Это же просто кошмар, в хорошем смысле слова” (This is a nightmare, in the good sense of the world.)

I read up on him, and everything became clear to me. He wrote at the height of the Terror in the 1930s, was arrested, and died of malnutrition in a psychiatric hospital during the Siege of Leningrad. This crazy, stupid nonsense was his way of making sense of the cruel insanity of the world he was living in, a world that did not fit his understanding of a way to make art, and he died from it, and of it. After reading about his personal life, his humorous, wry observations about men without ears or brains, doors that wouldn’t open, lines of people without end, seemed hideously tragic.

His wife recalled an incident when she was trying to take him food during the Siege:

She made two long treks from her apartment to the hospital bringing packages, which were accepted, indicating he was there. The third time she went, two starving boys along the snowy path on the Neva’s ice begged her for help but she clutched to herself the tiny package of bread she was holding. When she reached the hospital the person at the window took the package and told her to wait. A few minutes later he returned, pushed the package back at her, and told her that Kharms had died. Walking home she wished she had given the package to the boys, though it would have been impossible to save them.

The other brilliance of Kharms is that, even though we are not (yet, hopefully) at the levels of inhumanity that he experienced, he lives on in the absurdity of modern society.

Today while I was stopped in the center lane at a red light, a woman in the right lane in the car next to me rolled down her window and motioned for me to do the same. “where’s the King of Prussia Mall,” she asked, squinting. It was on our right, sprawled for the upcoming mile, with tens of box stores and restaurants at the intersection and a sign declaring “King of Prussia Mall” just ahead. “it’s to your right,” I said. “Just there.” She squinted. “Where? I don’t see it.” I pointed her to the right again, where a massive parking garage rose behind a Container Store, TGIFriday’s, and Nieman Marcus. Then the light turned green, and she tried to get away from the right turn lane.

Life is sometimes absurd and crazy without explanation. Thanks to Daniil Kharms for reminding me not to stress out too much about it.