How to think in two languages

This is one in what looks like is becoming a series of posts in how I reconcile growing up mostly in America but wanting to raise my child in Russian.

I need to get something off my chest.

I’ve never read War and Peace. Or Anna Karenina. Or The Brothers Karamazov.

In all the years I’ve been pretending to be an expert on Russian culture, I’ve never read any of the great works of Russian literature.

This fact is so embarrassing that I’ve never admitted it to anyone. I don’t think even Mr. B knows the extent of my Russian illiteracy.  Every time someone mentions War and Peace, I nod. “Oh yes, the French occupation of Moscow. The love of the land. Austerlitz. All of that,” but I’m praying the conversation doesn’t go any further.  So I try to distract them. “Hey, speaking of how much Russia sucks, did you hear that Putin’s press secretary bought a $620,000 watch?” and I’m off and running back in comfortable territory.

Since I was little, I had this grand idea that I would read Russian literature in Russian. I’ve presented with many opportunities to read translations of Russian works, but I passed, because, to me, it was embarrassing to be reading words that had been filtered into stilted English when I could very well understand and read the richness of the original.  It was a cop-out.

But every time I started on the original, it was just too hard. In English, I am an extremely  voracious reader. I can get through a 300-page novel in one sitting if no one bothers me, and I’m reading Middlemarch without a dictionary. In Russian, as I’ve written before, I’m at probably a fifth-grade level as a speaker, and probably a second-grade level as a reader. I have to rely much more heavily on context clues than I’d like. Not only am I fighting grammar, I’m fighting context.

My Russian history knowledge is pretty strong from 1901 onward, but before that, I’m lost in a sea of unfamiliar tsars, backwater regions, and military terminology I’ve never learned in school.  I’m essentially going from driving 150 miles per hour on the autobahn in a BMW to 30 miles per hour on some unpaved road in a  2001 Honda Civic.

So I struggle on for a couple pages, but I eventually just give up. So far, I’ve given up on Babel, Bulgakov’s Notes of a Country Doctor, War and Peace, and Turgenev. I am missing an enormous gap of cultural knowledge that I will not be able to pass onto my child because, basically, I’m lazy. And the lazier I get,  the less my vocabulary expands, the less time I have before my daughter learns to read and starts asking questions.

Unfortunately, The Russian Federal Agency of Publishing and Mass Communication’s recent ad campaign did nothing to assuage my guilt (in English and in Russian). 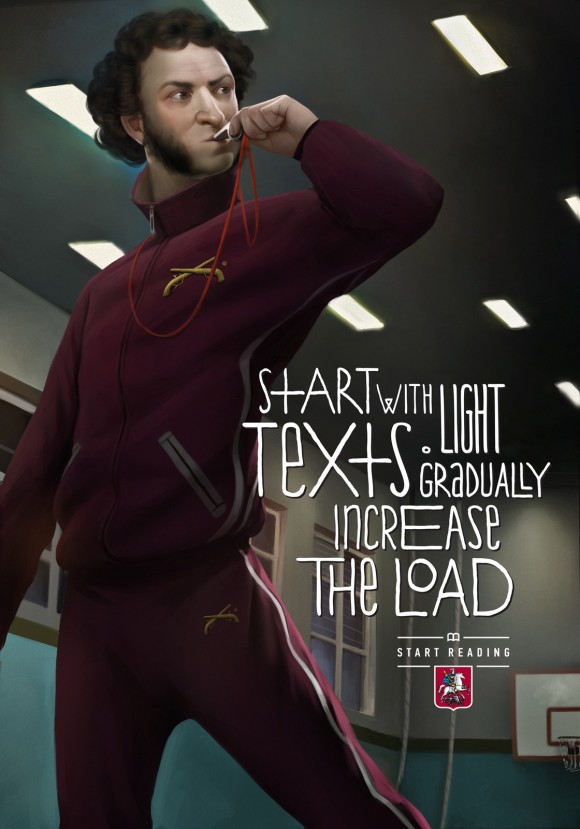 I’ve been wallowing in my secret Russian classic shame for years, but once I realized that I wasn’t gaining words and therefore wouldn’t be able to communicate my feelings about, say the state of feudal serfdom in Russia in 1861 to my child, I decided it was time to get cracking.

A couple days ago, I  picked up Lermontov’s A Hero of Our Time, in English. Yes, it was cheating, but I was reading for content. The book was extremely interesting and I got sucked in. But as I progressed through Pechorin’s adventures, I couldn’t help feeling a nagging sense of guilt. You’re not getting the full picture, it kept saying, because you’re not reading the Russian words.

Just a single word can paint an entire picture, regardless of context, depending on your background.

Take the Russian word for bread, for example. Хлеб. (Khleb.) One syllable. Simple. Easy to translate.  But when I think of хлеб in Russian, I think of rich, warm black bread harvested somewhere in the Ukraine, flecked with pumpernickel seeds, eaten with steaming hot borscht, preferably after a hard day’s work in the fields. Or of the bread that never came to Russia during the revolution, of starvation and desperate winters, of coarse crusts soaked in water and salt and crammed down hoarse throats hastily in dimly-lit peasant huts. When I think of “bread”, I think of thin white Wonder Bread that tastes like nothing and lasts for weeks unrefrigerated, under the glaring neon lights of a generic suburban supermarket.

Each word is a world of its own, a world that can’t be replicated through translation. As a result, I’m constantly questioning all the English words in translated works when I read.  For example, the one of the first sentences of A Hero of Our Time is “As I entered the Koishaur Valley the sun was disappearing behind the snow-clad ridge of the mountains.” In the original, it reads, “Уж солнце начинало прятаться за  снеговой  хребет,  когда  я  въехал  в

Койшаурскую долину”, which translates in my head as, “And already, the sun was beginning to hide  behind the snowy mountains, when I rode into the Koishaur Valley.”

Here’s how the valley looks is in real life: 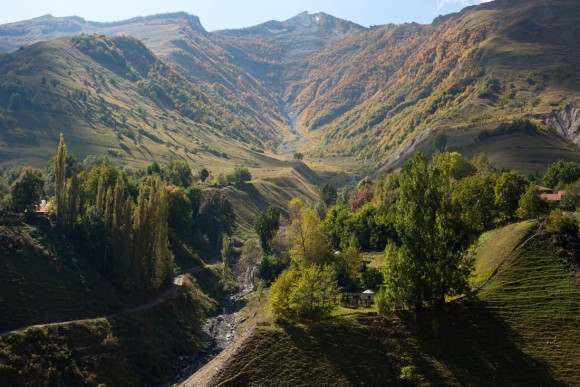 And here’s how I picture it based on the English description: 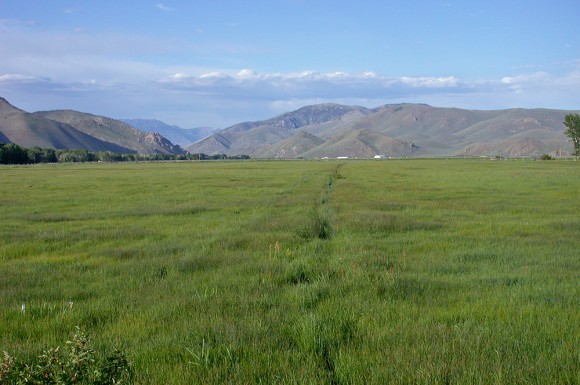 This  concept of passive duality got to be so annoying that I felt like I was splitting in half: the English half, going full-speed, reading as quickly as I wanted to, finally getting through the classics, and the Russian half, whining about how every word was being translated incorrectly, begging the English half to slow down.

So, I decided to compromise.

I got the Russian audiobook version.  I’m now reading Hero in English and then listening to an audiobook version of it in Russian afterwards. This has got to be the most I’ve ever worked at reading a book, and it’s taking me the longest. But this way, I understand everything going on in the book, and then I get the full scope of what exactly the author was trying to say when I listen to the Russian version.

I’ve so far listened to two chapters, and even the most simple descriptions which were just beautiful in English come alive in breathtaking color in Russian.  The military terminology makes more sense, and the relationships between the narrator and the Russian army officer he meets feels more genuine, more real, like the author intended it to be.  And I don’t feel guilty about either skipping out on the Russian or the book.

I’m not sure if I’ll be able to finish the book because this is just as much work as all my previous attempts, and honestly, on the drive home from work, when I usually listen to podcasts,  my concentration and energy are towards unwinding from work and transitioning to taking care of the baby. But I hope I will finish, because then I might be finally ready to move on to War and Peace, just in time for her to graduate from college.