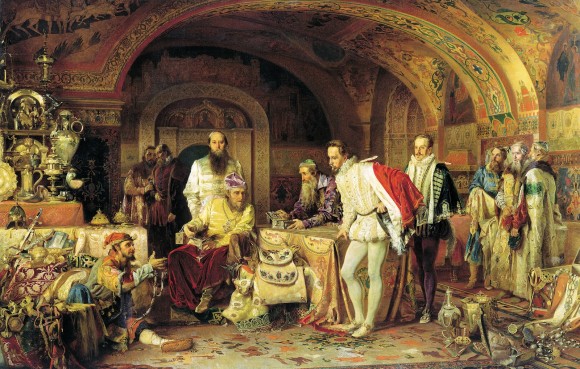 One of the interesting things about being pregnant is that I’m getting all kinds of new information.  In addition to people sending me (sometimes unsolicited) parenting advice, I’ve also been invited to join Russian parenting groups for Russian-speaking parents my age in the New York and Philadelphia areas on Facebook.

In these forums, people (mostly women) my age with perfect English and names just as Americanized as mine discuss what to do if your toddler is not eating kasha (try to guilt them) and where to find Russian versions of Disney cartoons online for free (BitTorrent.)

One of the other things that frequently comes up is the need for service providers, such as nannies, plumbers, people who install hardwood floors, lawyers, etc.  “Can someone recommend a plumber that works in Northern New Jersey? Tia!” a post will read, thanking the recommender in advance.And invariably, only hours later, the thread will be full of something that looks like this: 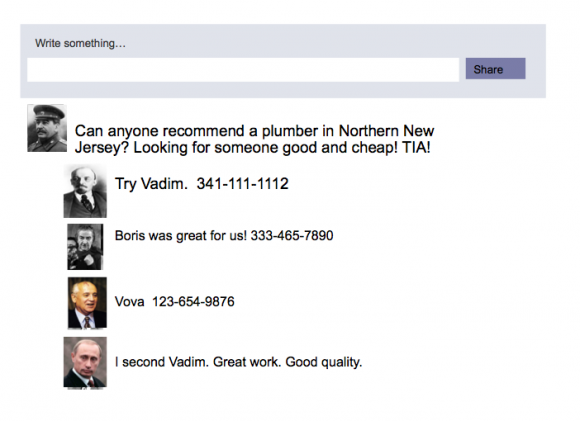 If you’ve noticed the pattern, you are correct: NONE OF THESE PEOPLE HAVE LAST NAMES.

Every service professional anyone Russian recommends does not have a  last name, but, even in the age of internet transparency and websites and business licenses and that kind of thing,  they can always somehow magically be located by just a simple phone number.

You call them. “Allo,” a gruff voice will say, sounding like they are either in the bathroom or smoking in an underground opium den. “Is this Oleg?” you’ll ask timidly, because, again, you have no real way of knowing since…you only have their first name and phone number. “Yeah, it’s Oleg,” the voice will say, acting like you owe them something instead of the other way around.

“I heard from my friend/mother/cousin/accountant named Lilya that you do good plumbing work,” you’ll waver. “Maybe you can come look at my pipes?” The line will remain silent. “If you have some time? Maybe next week,” you beg, like it’s them that’s doing you the favor.

“Sure,” the man will say, and gruffly hang up. You haven’t given Oleg Nolastname your address,but you can bet your bippy he’ll be there, and be cheaper than Americans.

I’ve been trying to figure out why Russian professionals do things they way they do for several years now, and this latest forum trend has brought up the last name thing again for me. In the pre-Facebook era, when we asked for recommendations, we’d be handed a first name on a slip of paper. There was a guy who did our backsplash. I still have no idea what his last name is.  What if you want to recommend him to someone? You simply go by phone number, because Russian businesses also don’t have websites.

What do you do if there are two people with the same name, as invariably happens when you have a small immigrant community? You just switch the phone number.

My sneaking suspicion is that this is all done for tax purposes. As in, if you don’t have a last name that can be traced anywhere, you’re super-mysterious and  don’t pay taxes, hence passing the savings down to the average Russian.  Kinda like Voldemort. He doesn’t have a last name, and it takes 7 books to find him and kill him.

My second theory is that Stalin scared Russia so bad in the 1930s that no one  STILL wants to own up to the fact that they’re who they say they are. Since Facebook has essentially become Happy Stalin with a Flat UI, the urgency for anonymity is even more apparent.

My favorite theory, though, is that everyone wants to be a star. If you don’t have a last name, you are unique, the best of your kind.  Like Cher. “Oh, you know that Slava? Which Slava? THE Slava. Plumber Slava. Master of the pipes. Fixer of the leaky faucet. He’s the star of Northeast Philadelphia. SLAVA! SLAVA! SLAVA! The people want more (for much, much less than the Americans are charging.)”