The best books are conversations 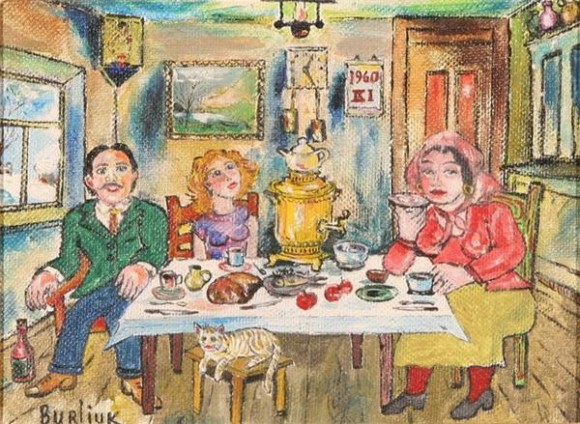 I like to read so much because I’m an introvert.

In real life, I find it hard to get into in-depth conversations with interesting people I’ve just met  because I’m too embarrassed to ask probing questions and come across as a dork.  But in a book, it’s like the author is having a private audience with me on their own volition, and I don’t have to say a word.

A good writer can make you feel like you’re sitting beside them in the passenger’s side of a car, on a road trip, or in a cafe, sitting over cups of coffee. A terrible writer makes you feel like they’re the only person you know at a cocktail party, and you want to jump out the window.

In addition to looking for generally-interesting books to read, I also specifically scan the landscape for books written about being Russian, partly because I want to confirm and validate my own experiences, and partly because I want to learn something new about Russia that I haven’t already learned from hundreds of family stories and GIFs of Putin riding a bear.

So, I got excited about Anya Von Bremzen’s book Mastering the Art of Soviet Cooking early on. Von Bremzen has been a food writer for most of her career and decided to write a memoir about growing up with Soviet cooking.  The cover looked lively and snappy, and I was interested in what she had to say about Soviet food: a genre ripe for memories. 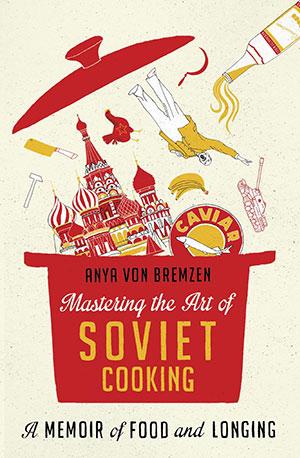 I went into this book with huge expectations, both to validate my experiences with Soviet and Russian food. I was also looking for a friend who I could relate to, to share immigrant horror stories with me.

I did find Von Bremzen to be a skilled writer. She does an interesting thing: going through each decade of Soviet history and offering a recipe, as well as parallel stories about how her family survived the time period.

She starts by making a kulebiaka, a tasrist-era food, with her mom, and works her way through the 30s, the war-torn 40s, gray 50s, all the way to the 70s and 80s, when she and her mom left and immigrated, interestingly enough, to Philadelphia.  She describes food with all the necessary gustatory descriptions. “Crispy brains in brown butter”, “burnished-brown lamb and potatoes enlivened with an angry dusting of paprika.”

She also talks about interesting movements in Soviet food history- did you know that the humble kotleta was taken directly from the American hamburger after Anastas Mikyoan, a party leader close to Stalin, took a trip to the U.S. in the 30s?  Both me and my parents, who also read the book, were blown away by this.

However, in spite of all of this, I just wasn’t sympathetic to her experience.

Her writing is the perfect tone for Food and Wine magazine. Check out the first paragraph of the prologue, which is titles “Poisoned Madeleines”, a literary allusion to Proust.

Whenever my mother and I cook together, she tells me her dreams. So rich and intense is Mom’s dream life, she’s given to cataloging and historicizing it: sleek cold war thrillers laced with KGB spooks; melodramas starring duty-crushed lovers.

Her writing is interesting when talking about food, but when she uses the same types of phrases to describe her family, I check out. The chapters about her family seemed interesting on the surface: they were involved pretty deeply in the Soviet government, and her dad worked on keeping embalmed Lenin..well, embalmed.

The chapters on food were more interesting: Salat Olivie, sosiski, and all that fun stuff, were stripped of their nostalgic aura and examined at the root. If all the personal chapters were excluded the language toned down, it would have made for a great read.

But check out that first paragraph! I already had to struggle to care about this paragraph, and I was on the author’s side! I love the KGB. I love Soviet cooking. But,  I felt like I was sitting on a couch, glass of terrible-tasting hipster tea cupped meekly in my hands, while Von Bremzen was starting what would be a very long, proselytizing lecture that I couldn’t get out of.

On the other hand, there’s Lenin Lives Next Door. It was sent to me gratis by Jennifer, whose blog I’ve been reading for a couple years now,  but I would have definitely paid for it.  Although I know Jennifer a bit through her blog and Twitter, from the moment I opened the cover, I was sitting next to her on a couch, gossiping. I was involved in her adventure. 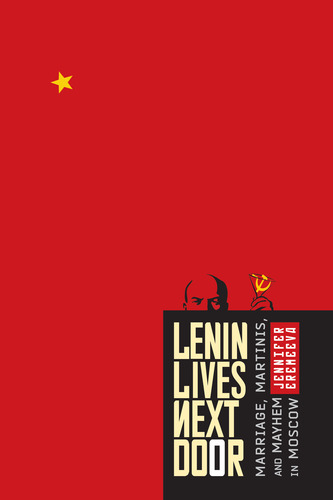 Her style is light, conversational, and easily-accessible. “Hey, here’s a crazy thing that happened to me,” she says, “and I’m sharing it with you.”

To give you an idea, the first paragraph of the book is,

You have to really want to go to Russia. The briefest of visits involves a lot of paperwork, and if you want to hang around for any length of time, they make you take a leprosy test.

Eremeeva started a tsar-struck student in the U.S. and worked her way through Russian classes, arriving just as the Soviet Union collapsed. That would be historic enough for anyone, but she decides to stay in-country, eventually marrying and raising her daughter there.

What’s even more interesting than any of that (Americans choosing to live outside of America are always a perennial interest of mine,) is that she doesn’t enclose herself inside the diplomatic/expat bubble that many North Americans abroad tend to.

She knows about blat, the best place to get cigarettes in Moscow in 1993, how to work the corporate ladder at a shady Russian conglomerate, and how to plan a party for 400 people.

She knows everyone foreign in Moscow, and a lot of Russians, too. She speaks Russian. All of this lends itself to chapters rich in experiences and joie de vivre and a life that reads like a novel bursting with colorful characters: HRH (Her Russian Husband), who is ex-military and steadily more involved in Russian business, Joe Kelley, a “six-foot-four, three-hundred pound Irish-American former Ohio State linebacker, who came to Moscow on a hunch, spoke no Russian, and knew exactly one person,” and Jesus Arismendi, who is Venezeulan, gay, and somehow wound up in Russia, drinking Kir Royales.

Some of her adventures include trying to get HRH to buy life insurance (something Russians don’t believe in) in a chapter called “The Preexisting Birkin”, watching as HRH pays for a suit on Saville Row in London in cash, helping her daughter with Russian geography, and being disinvited from the tyrant-run “depressing-books book club on Prechistinka.”

In spite of the fact that Russia in the 90s was gray and depressing, you never get that sense from the book. It’s hard, for sure, but also interesting, and has plenty of things to laugh about.  It’s a different Russia from the one I know: exciting, frustrating, and, most importantly, interesting and lively.

I used to want to write a memoir about my family’s immigration, but then I realized, after a certain point, that I had nothing interesting left to say, and if I did, it would probably come out like Von Bremzen’s book: overloaded with family sob stories, sappy cliches, and some overwrought descriptions of terrible Soviet food.

I’m more than happy to sit quietly on my couch, spiked  and listen to Jennifer tell me about her Russia, the Russia of the present and the future, which is a little less gray, and gives me some hope that not all is lost.