In Miami and in Vapiano 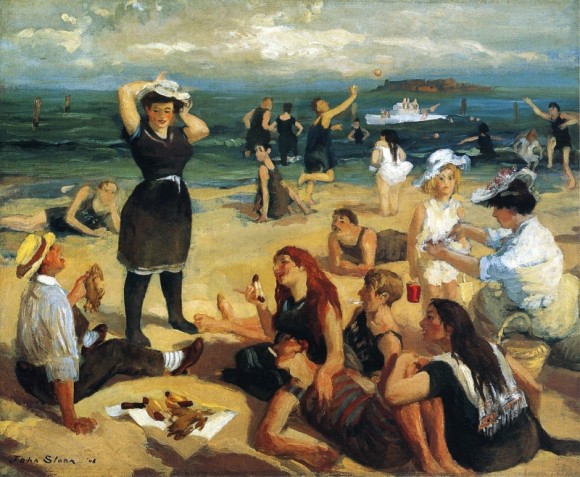 Swamplandia! by Karen Russell, is a weird jewel of a novel about a nuclear family running a slowly-dying gator wrestling park on a small island  off the Gulf Coast of Florida.  Russell’s Sunshine State is surreal, dreamy, swampy, thick with mud, mosquitoes, and warbling birds.

Florida, in those days, was a very odd place: a peninsula where the sky itself rode overland like a blue locomotive, clouds chuffing across marshes; where orange trees and orderly rows of vegetables gave to deep woods, and then, further south, broke into an endless acreage of ten-foot grass.

The seeming impossibility of a tropical paradise combined with the exuberance and proximity of South America, the salt and heat, and, of course, a python-killing contest, makes for a unique atmosphere unlike anywhere else in the U.S.  It’s a unique brand of chaos and laziness.   It’s Florida:

Mr. B and I flew down to Florida for a weekend in March, the week of Spring Break. We went with two friends to visit a third friend who had moved there recently from Philadelphia. It was actually in no way like Spring Break since all of us have full-time jobs, some of us have kids, and none of us want to do wet-t shirt contests because our Gap cotton blends are tumble-dry only.

We weren’t going to shotgun beers, go to clubs where they played Pitbull, or stay out past 12. But damnit, did we need spring.

Just a couple months ago, I wrote,

Going back through my archives, I realize that I’ve bitched about winter almost every year, which makes me believe I need to either move to Florida or stop blogging from September to March for the sake of humanity.

But, the plane emerged from the clouds and into Florida air space into blobs of green, brilliant and sparkling, oceans and pools of water lapping in marshy, lazy bays, life, pulsing on its very vein! Here it was! Warm Valhalla!

“That’ll be $6 if you want the in-flight snack,” the stewardess said. 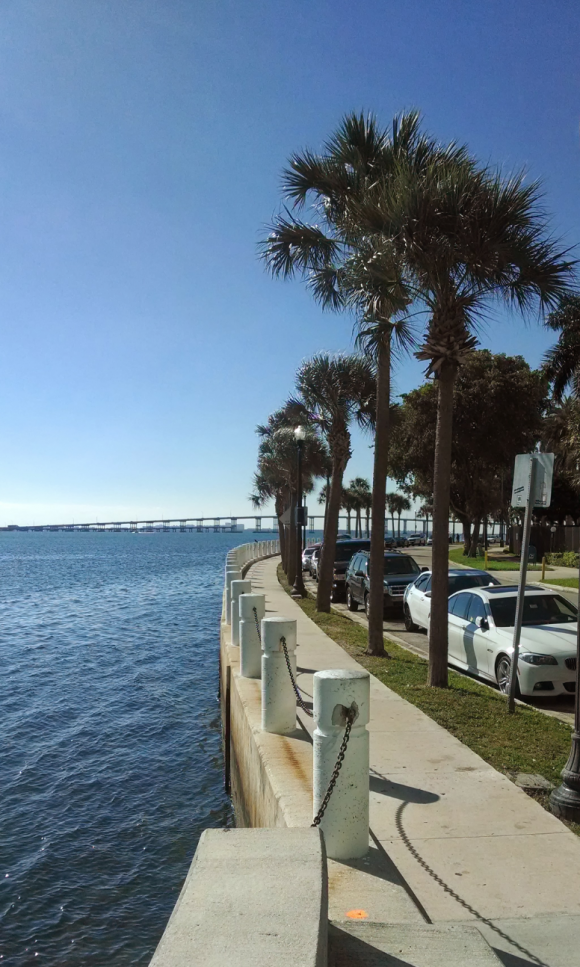 We landed in West Palm Beach, about an hour from Miami and rented a car. It was so warm that we opened the windows.  We turned on the club mixes. You can turn on the song below and feel like you’re in Florida, too.

Driving into Brickell, Miami’s new,  wildly-sprawling financial district, we passed ceviche stands, palm fronds, glimpses of the waving ocean. We saw an old guy jogging in just a Speedo. We looked away awkwardly, because it was gross. But inside we were happy it was shorts (no shorts?) weather.

Coming to Miami from the buttoned-up, rigidEast Coast in the winter is an exhale, a descent into warm, toasty madness. Anything goes.

So we exhaled.  We drank coconut water out of coconuts that a guy hacked at with a huge machete. 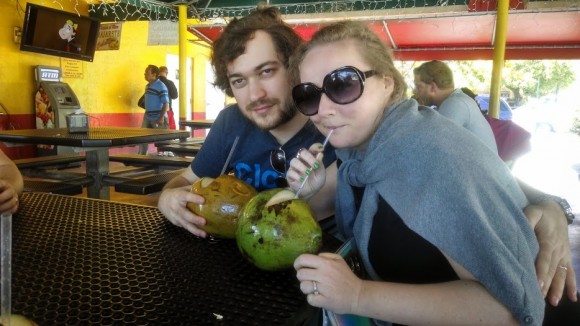 We ate paella out of shared plates.

We smoked cigars in Little Cuba. Some of us with the chromosomal capability to do so grew Castro beards. We were ON A BOAT. We passed Key Biscayne and there, in the middle of the ocean near the island, was a flock of twenty or thirty small boats, strung together, bobbing with the rhythm of the EDM coming from them. These were the Spring Breakers. They dove in and out of the water, between the boats, guzzling cheap beer and swaying like palm fronds.

We laughed at them and looked seaward. Some of us unfortunately continued to look like Fidel Castro in the 1940s. 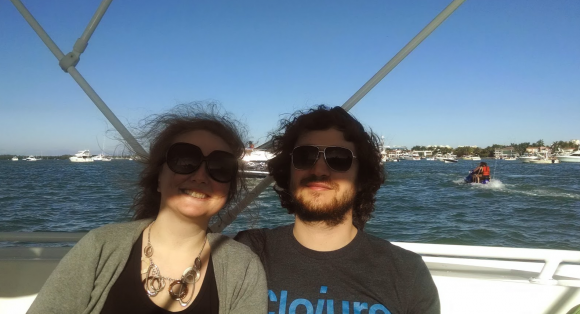 We did all the Florida things you’re supposed to do, and while we were doing them, I was thinking about how eclectic, weird, and wonderful Florida is, and what joy it was to be able to experience it.

If I were a normal person, I would end the post here on a high note. But you know me.  I can’t have normal-people fun. I’m neurotic.  I’m Slavic-pessimistic, and I’m pretty sure if I’m having a good time, the world’s going to end tomorrow. So I’m going to tell you that there was one shadow in our sunshine-y vacation, and that shadow’s name is Vapiano.

Vapiano is chaos that happens when restaurant industry ambition, combined with wishful thinking, goes unchecked and descends into anarchy. And, let me tell you, anarchy tastes like olive oil drizzled over bruschetta. It’s a restaurant “that is defining the future of fresh casual – a new and refreshing niche in the restaurant industry”, according to the website.

Vapiano is like if you take the worst parts of an Italian restaurant, graduate-level math, and guilt and blend it together into a hurricane of extreme social awkwardness, according to me.

For dinner on Friday, our friend recommended that we go to Vapiano because he had a Groupon and had been before, and the food was great. The way Groupon works if you’ve never bought one is, you sign over your email address to the devil, who will send you approximately 11 Groupons per day until they break down your will to live. Most of these, your spam filter will catch. Until you see one that looks like vaguely a good idea, but that’s 10 miles across town and there’s a 5% probability that you’ll go, but you buy it anyway because “it’s 50% off and you want to try something new.”

If you actually go to the restaurant, there is a 95% chance you didn’t read the small print correctly and you end up paying more money because 1) if you don’t, the restaurant sues you and 2) You’re too embarrassed to pay for a $12 meal with a $5 Groupon. You then begin to wonder if you can put the tip on Groupon and all of a sudden you’re a horrible person and the societal norms of Western humanity are collapsing.   All of this would be fine, though, if Vapiano operated like normal.

But Vapiano operates on hipsterism, whimsy, and vague suggestions.  As Jack Donaghy would say, there are no rules, just like check-in at an Italian airport.

When you walk into Vapiano, They give you a card. “Hang on to this card,” the Hostess says in a breezy voice that has a hard edge to it, not unlike Soviet bureaucrats handing out housing applications in the 1960s. God help you if you lose your Vapiano card, because then you can’t pay for your meal. And I’m not so sure there aren’t any legal repercussions.

After you get your card, the hostess leads you to believe you’ll be seated, but you’re really funneled into an open space with three possible choices: the alcohol bar, the pasta bar, the pizza bar, and the salad bar. “You can go to any of the three,” our friend encouraged us while we stood like lost sheep, bleating at the options. He strutted to the appropriate line without any hesitation.  He was an expert. He made it look easy.

“Oh, one quick thing,  but if you’re going to the pasta bar, go there before you go to the pizza bar because you have to pay differently for each one.”

“But don’t we just pay with the swipe card?”

“Yes and no. You do need to swipe it, but you also need to pay after you’re done eating. So hold on to the card.  But if you’re getting a drink, get that last, because you have to pay with cash and leave the tip on the card.”

“Probably not. You should order the pasta first.”

“Can we order the pizza?”

“Not until you’ve ordered in the pasta line. The salad is in the pizza line.”

“So we can get salad and pizza?”

“Yes, but you have to pay for pasta separately.”

“And we tip separately?”

“Yes. They’ll bring the meals to your table.”

We became desperate. “Do we need a PhD in Mathematics and Logic Theory before we order?”

“Probably.” Our friend laughed. “It’s not that hard you guys.”

We tentatively approached the pasta line. There were other prisoner-diners behind us, and they were fidgety. “I’d like a pasta?” I said. “What kind,” the chef glanced at me. “You can have four toppings, but you have to pay for the fifth.”

“I have a Groupon?” I said tentatively. “Not here,” he said. “You’ll have to pay separately when they tally you up at the pizza line.” The fun quirk with our Groupon was entitled us to two entrees and one appetizer per person, as well as a free drink. Which were appetizers? Which were entrees? Would the world ever make sense again?

We struggled through our pasta order. “That will come out later,” the chef said. “You can go sit down.” He reached expectantly for our cards. My heart was racing. I hadn’t been this stressed out since I watched March of the Penguins (WILL THE EGGS MAKE IT??? WILL THE DADS STAY ALIVE???). We swiped the cards. “This isn’t the only place you swipe. If you order a pizza, you have to swipe there, too.”

We moved into the pizza line. “Do you want a salad?” they asked us. “Yesmno,” we mumbled. And mumbled our way through the toppings and salad choices. We swiped the card again.

Then we tried to order drinks. “Do you bring those out to the table, too,” we asked. “No, the drinks, you pay for here,” they said. “How do those work with our Groupon,” we asked. “Not sure,” the bartender said.

We ate, gulping down huge doses of basil nervously. The food was great, but all the time we were eating, I was panicking. “Do we tip the waitress? Do we put the tip on the chip card? Do we split out the difference of the Groupon?”It was like H&R Block during tax season in there.

The waitress came up, smiling. We needed to swipe our cards once more to pay the bill. “I think I threw mine out,” Mr. B said. The table went silent. The waitress stopped smiling. He finally procured the card from his pocket. “We have to split the bill into three, with three Groupons,” our friend said. Steam visibly started coming out of the waitress’s ears.

Finally, we paid, and got out of that Godforsaken, delicious place.

“Vapiano is a fast casual restaurant with a twist – customers use a “chip card” to personally order their food or drinks from the bar or from the individual fresh pizza, pasta or salad stations. With this new innovative technology, Vapiano is going to change the way restaurants do business!”

Watch out, America. Vapiano is coming for you.

And that was my Florida.