How I’ve been avoiding writing: I got a typewriter 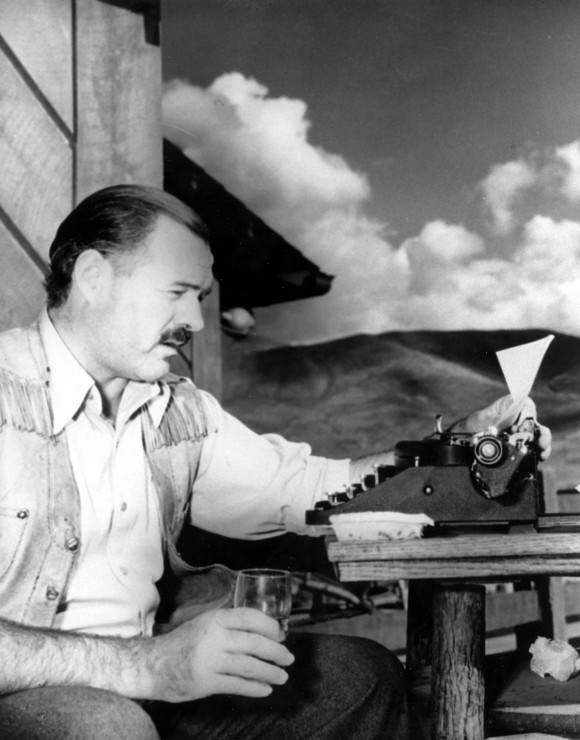 Writers will do crazy things to get out of actually writing, because we like the idea of writing, but we hate actually sitting down on our ass and punching out the words.For example, Ernest Hemingway joined the American army in Italy in order not to write.  Things are looking pretty bleak when you voluntarily go to Italy, get severely injured, and have to spend months in a hospital rather than write another goddamn word about Frederic Henry and/or rain.

Just like other great American authors, I have been very hard doing a little not-writing of my own since December. Mainly, I decided that I was writer blocked, and couldn’t write another word. First, I decided it was because I was procrastinating too much on the internet. Then, it was because I didn’t have a really good text editor on my computer. Then, I realized that the problem was very simple: Writing is terrible  on a computer, which is a digital way of keeping Art and Literature and The Man down.  I tried writing by hand.

Which meant I had to go to a fancy art store, get special art notebooks and Moleskines and precision pens, and I couldn’t write another word until I did that.

But even that wasn’t enough, because I am a fragile creator of masterpieces.

I decided I needed a typewriter. 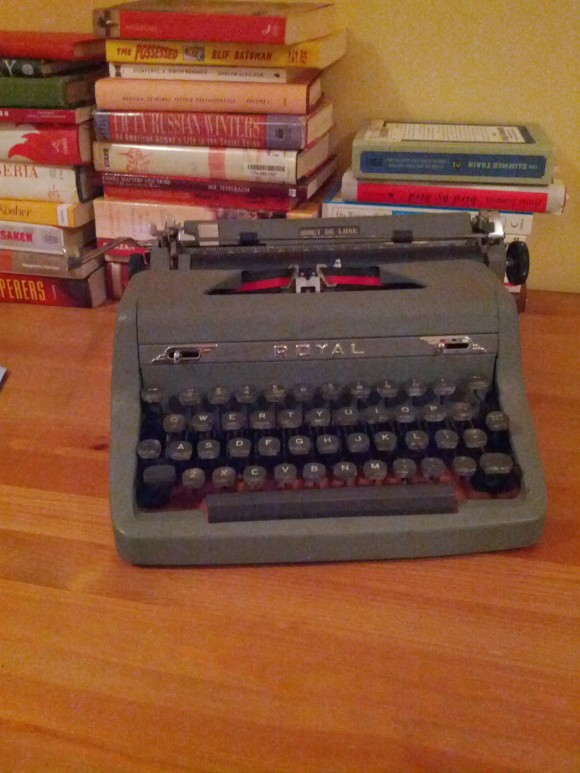 So I started trolling Craigslist, and, on one fine evening late in December, I was headed to Fishtown to pick up my Royal (mine is not pink, because typewriters are for Real Men.)

“Will you come with me,” I pleaded with Mr. B. The owner of the typewriter was male, and he wanted me to come inside to check the machine, and, naturally, I was afraid of shanking. “You’re going to Fishtown?” Mr. B asked. “You’ll be fine.”

Fishtown is Philadelphia’s Brooklyn, and the only thing you could get shanked for there anymore for is stealing someone’s premium-roast coffee.

I got to Fishtown, and, sure enough, a man in his early 30s wearing a sweater vest from the 1970s, tight jeans, and a handlebar mustache showed me into his apartment. “I’ll take it,” I said, pressing a couple keys, imagining my literary future unfolding in front of me. I could finally break free from the bonds of that cruel Muse that wouldn’t let me use any writing utensils manufactured later than 1962.

“You getting that for a friend,” he asked casually, eyeing me up and down skeptically. I didn’t look homeless and I wasn’t wearing my Warby Parker glasses, so I didn’t pass the qualifications  for someone who could plausibly own a typewriter.

The other hipster shrugged and held open the door for me and The Muse of Future Typing.

It was a hipster-off, and I passed the test. Check and mate, hipster-bitches.

If you’ve never carried a non-portable typewriter down the street and felt smug doing it, it’s definitely an experience. I put it in my trunk and dialed my dad.

“What,” he said, immediately suspecting the worst.

“I got a typewriter. Do you know how to make it work?” I asked.

It was even worse than he suspected. “Why did you get a typewriter? What did you pay for it? You probably overpaid. Why did you get one that doesn’t work?”

The immediate Russian reaction to buying anything vintage is, You got screwed because you were too stupid to buy new.

“I bought it because I wanted a typewriter with history,” I told him. ” I wanted to feel connected to other Writers before me.” I have never sounded so sanctimonious in my life.

“Ok, I gotta go,” my dad said. And hung up because he needed to research cleaning typewriters.

He called back two minutes later.

“You need special vacuum cleaners. You don’t have any. Only I have them at my shop. You need to come to our house and I’ll clean it for you.”

“Women will never be able to clean machinery,” my dad said, and hung up, to go back to YouTubes.

He called back two minutes later.

“You’d better clean that typewriter really well, and have Mr. B help you. Who knows, you could write a best-selling novel on it and then that machine could be worth millions of dollars.”

“Gotta go, ” my dad said. “I need to get all my equipment together,” and he hung up, for the fifth time that day.

But it turns out that there’s a reason that we don’t use 1950s-era typewriters to write anymore, and that’s because the keys are heavy as shit and it is impossible to type fast without the keys locking.

All of this is to say I have been doing absolutely dick except cleaning my typewriter and watching videos about how to clean a typewriter and looking for pictures of Ernest Hemingway with the same typewriter as me, and fielding my dad’s calls about my typewriter; everything except actually writing,  so really, the typewriter is working exactly as intended.