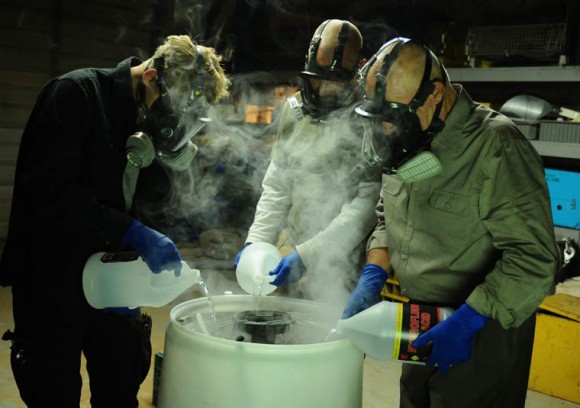 I’ve started watching the wildly popular Breaking Bad, because it was getting to the point where I couldn’t be on Twitter anymore on Sunday nights without hearing about how amazing it was. Of course, these are the same people who live-tweet American football plays and The Bachelor, so there was still room for a huge margin of error.

What really concerns me, though, is the lack of women in the meth industry. I’m already halfway through season two, but I have yet to see one woman either creating methamphetamine or slinging crystal to customers, although, thankfully, minorities are well-represented. Where are all the Mrs. Whites? And if there aren’t any, why isn’t the show portraying them, as aspirational images for girls?

What kind of message does this send our ladies?  In an age where making meth from Sudafed is a highly-valued commodity skill that can have a salary of potentially hundreds of thousands of dollars if you make the purest speed and don’t piss off anyone who’s been a repeat offender and has a machete, we are not encouraging enough women to go into this industry.

Making meth is a 21st century skill that all women should be learning from the time they take their first chemistry class in high school.  Unfortunately, practical skills are not a focus of the American curriculum, a reason that, although we remain first in the world in meth production, we are slowly but surely losing to Mexico. And it’s no surprise. A country that does not place value on real-world skills instead of doing endless busywork is bound to lose to a country where hands-on experience is valued, and often necessary to gain a meaningful career.

Although this phenomenon extends to both boys and girls, it’s more prevalent for women, who as we know, always get left behind in hard sciences , which is why it’s up to us to push them harder into a life behind a Bunsen burner and gas mask to avoid inhaling fumes hazardous to their lungs and any babies they might be carrying.

The second problem is that not enough experienced amp slingers are taking on females for mentorship. When Walt saw Jesse jumping nude out of that hooker’s bedroom and decided to go with him as his cooking partner, I couldn’t help but shake my head. Of course he was going to pick Jesse to mentor. It’s easier for men to talk to men, especially since men biologically tend to take more risks than women. It’s up to the men at the top of the industry, such as Tuco before he snorted blue ice from the tip of his machete and was brutally murdered in a shootout, to provide that kind of nurturing, supportive environment.

Instead of looking to guys who are dangerous and flaky like Pinkman, Walt should have looked closer to home, for example, to his wife, Skyler. Although, it’s true that during the whole first season she was pregnant and the fumes from the combination of Sudafed and other household chemicals could have killed her baby or possibly resulted in a low birth weight or even tachypnea, the important thing is that we show inclusion. Two generations, mother and unborn daughter, breaking up crystals together, would have given a strong signal to girls who are thinking about making hallucinogenic substances from ordinary household products but are just not sure how to get started.

Then there was that whore, Wendy. She also had the potential to be a great character, confident and sassy, selling her body and bags of blue ice to whoever comes to that motel on the wrong side of town. Unfortunately, she’s just shown as a weak-willed character who does nothing but say yes to officers and Jesse Pinkman. There  are three great chances down the drain.

(Oh, right. Marie could never make meth because she is annoying.)

So,as a result of the combination of bad hands-on experience in schools and terrible mentorship, our meth industry, while continuing to make money hand over  fist, looks bleaker than ever for women. Add to that the dangerous combination of misrepresentation in the media, and what you get is  disappointment.

There are already women being locked out of enough fields. Meth production and dealing doesn’t have to be one of them. Let’s change that, one dimebag at a time.