On the Amalfi Coast 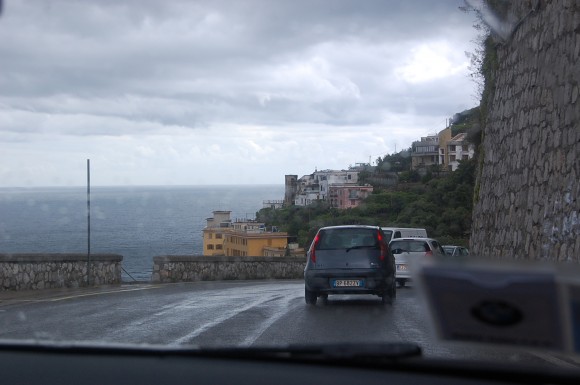 An hour away from Naples, down the Amalfi Coast, past Sorrento, you have to take the narrow turn towards S’Agata si Due Golfi or else you’ll end up going over the whole Sorrentine Peninsula. You’ll pass a small clothing store on your lefthand side where the women speak no English and you’ll try to ask in broken Italian, “Ma scusi, dov’e’ Nerano? A destro o a sinistro,” and they’ll scratch their heads and motion with their hands, helpless at your helplessness.

Your GPS will sometimes not work on the Sorrentine Peninusla.  It will mostly work, but the curves are so narrow that it will have trouble keeping up. “Take a right turn,” it will suggest as you huddle leftward against the shoulder, trying not to hurl yourself and your spouse into one of the Due Golfi, the Sorrentine and the Amalfi.

You will not understand the directions the person renting out the house to you will give you, because it is impossible to understand where to go on the Amalfi Coast, because the roads there are essentially like someone threw down a tangled ball of yarn and never picked it back up, the threads overlapping on themselves and trying to kill you. You’ll try to call back to clarify, but there will be no signal near S’Agata si Due Golfi, and you’ll wander, panicked, for half an hour, with the sea rising on your right and left.

If Italy has none of the properties of the real world: time, logic, and personal space, the Amalfi Coast has even less. Natural oranges and lemons the size of your face grow on the sides of precipitous hills, farmed by large men in tiny, green , three-wheeled trucks careening down the turns and breakneck pace. They are always pruning, always shearing, always tending to the fruit and the olives that seem to grow out of nowhere. Something is always carefully being burned on the slopes of the Amalfi Peninusla. 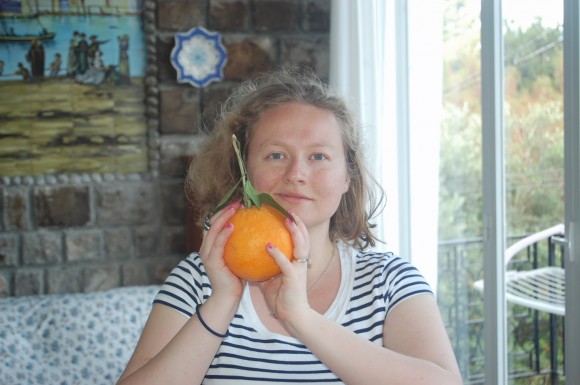 You will finally follow your rentors down past S’Agata, past tiny, tiny Nerano with its narrow street open to traffic, Olga’s general store filled with fresh bread, olives, salumieri, and not much else, and finally down to Marina del Cantone, an even tinier town that has a hotel, three restaurants, and not much else.

You are not staying at the hotel. You are staying at a house on a hill that has a view like this, straight into the sea. You can hear it at night. In the daytime, the breeze comes from it and the orange trees in your neighbors’ yard sway. 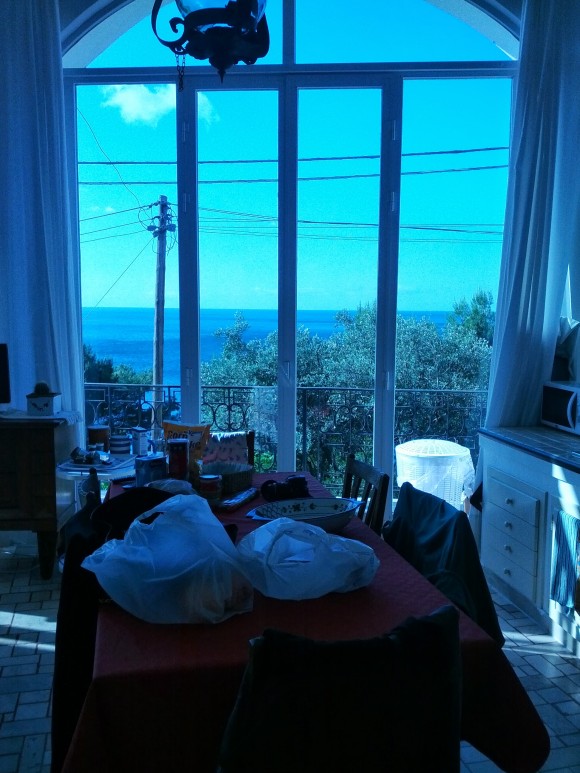 This is the clothes dryer. Italy gave up nuclear power some years ago, and drying clothes is expensive and stupid in a Mediterranean climate, so this is everyone’s clothes dryer in Italy: 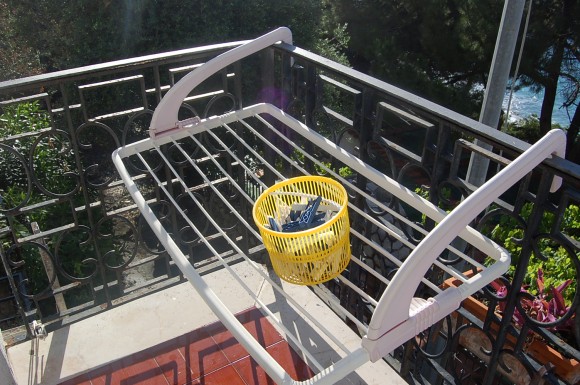 It’s Pinterest charming. It’s lifestyle magazine-worthy. There is no internet in the house, which is perfect for writing. Who else wrote facing the Mediterranean? Hemingway? Steinbeck? Gogol?  Gold?

It is one of the most terrifying experiences of your life.

It’s not open vacation season yet, so there are few people on your street. The space between the houses is large, and the sky is dark, dark, dark at night. There are few lights. Sometimes boats at sea.   You are petrified that someone will break into the sea house and that no one will hear you scream. You don’t know how they would get in; there are two gates and two locks, and the sea and the hills are on two sides. There is no cell reception in the sea house; you have to drive up a long, steep Sorrentine hill for twenty minutes before you get to civilization. But when it becomes dark and you are away from civilization, you are terrified of the Amalfi Coast, the shoulder of land hanging, dangling off the sea.

You ask your husband to sleep with a bread knife near the bed, especially on the night when there is a huge storm out in the Mediterranean, and it sounds like someone’s knocking on the huge glass panes, but it’s really just the wind and the rain, battering the coast. You’ve never lived on the coast, so this is strange.  But your husband doesn’t “feel like” getting the bread knife and also knives are not sharp in the soft underbelly of Europe, so you sleep with his Leatherman and the iPad next to your bed. You can batter someone with an iPad, you think as you try to fall asleep to the sound of the waves.

On the Amalfi Coast, one of the most-visited places and most beautiful places in the world, you are on vacation, and, you are scared shitless that you will have to beat someone coming into your sea-view house with an iPad.

There is a Madonna in the garden, but she’s not going to save you, because you’re crazy. Mama doesn’t do crazy. 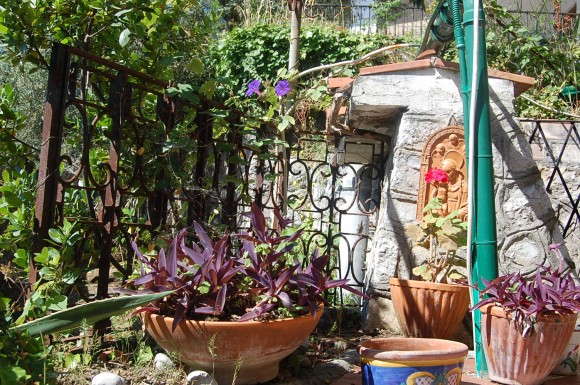 During the daytime, you take trips around the Amalfi Coast. You go to Positano: 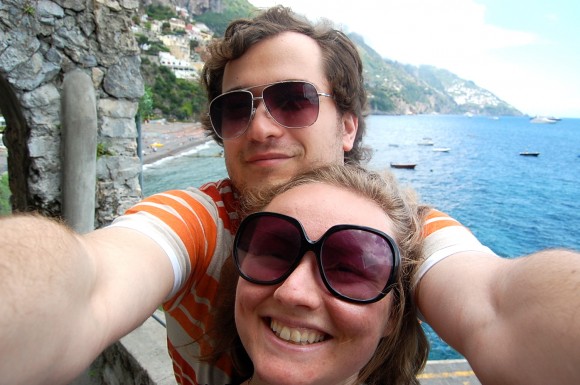 You are smiling because you’re on vacation, even though you have just been given a tour of Positano by a woman whose idea of a tour is taking you into all the shops where she has friends and pointing out examples of Positano knicknacks that you can buy. “Here is a great example of a glazed vase. I’m not saying you have to buy it here, but it might be a great idea,” she enthuses to your tour group. 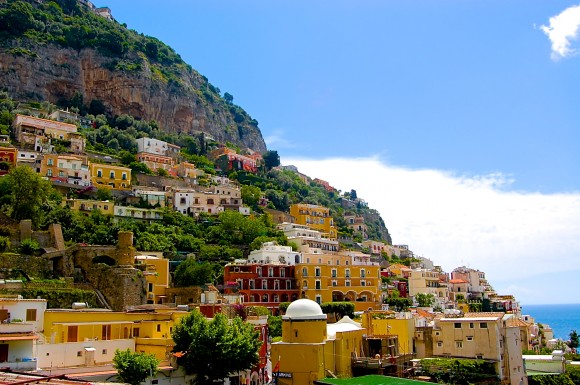 It doesn’t look like that in real life. It looks like money in the form of Positano sandals, Positano blankets, and Positano vases.  There is no God in the church.

You go everywhere, all over the coast, almost driving into the sea every five minutes. You go to Capri and take the funiculare to the top, and you look like a Guess Jeans ad: 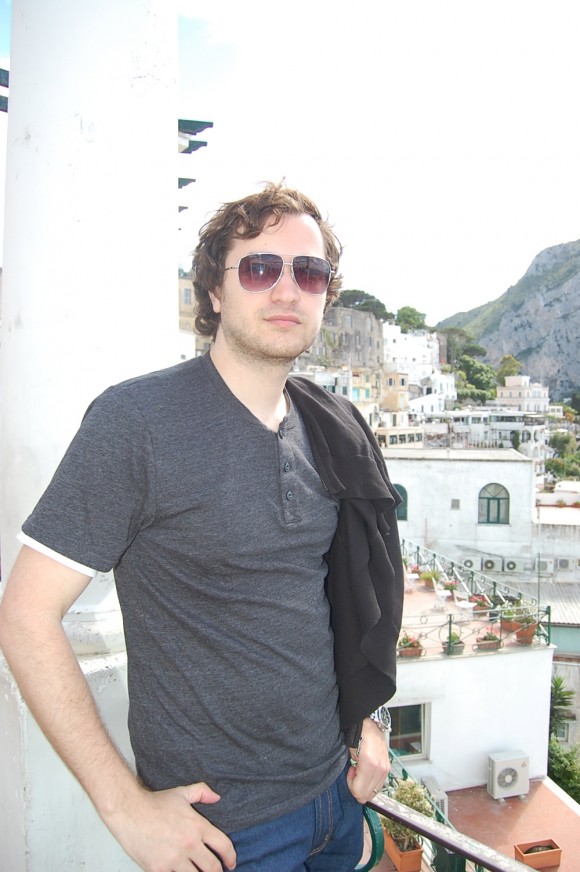 You go to Ravello, to Sorrento, to tiny shacks by the side of the road where they sell limoncello. You drive past Amalfi. You go everywhere, you drive everywhere, but there is no soul anywhere on the Positano Coast. You feel like an entitled hipster, but there is no place you can go that feels like real people live there, not like it’s been taken out, dusted off, stripped of all its soul and spirit, and stamped on a postcard, shipped en masse to Italian restaurants in New Jersey.

At night, the sea tries to  murder you. 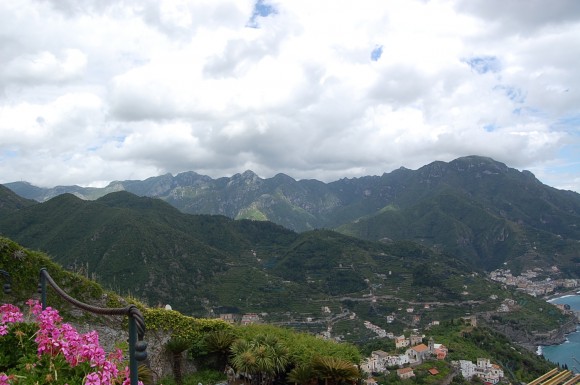 There are two places that are real.

One is a restaurant in tiny, tiny Marina del Cantone, the one your rentor recommended. He makes you a reservation for two, for eight PM, an early dinner in Italy, next to the sea. The woman who is the chef and the owner immediately seats you and starts fussing over you like an Italian mother. She is an Italian mother-her nine-year-old daughter plays the piano in the lobby of the restaurant/hotel, and it feels ethereal to hear Beethoven on the Mediterranean, almost like he’s from another universe.

You eat fresh octopus, fresh tuna, fresh whatever was caught that day, fresh mozzarella, and there’s more, more, more. Each of you gets your own fish, complete with a fish head on the plate, and if this isn’t life, you don’t know what is. The house wine she brings out doesn’t have a label. Nothing is packaged. There is no menu. There is no pretense. No “organic ingredients.”  “Whatever we have today is what we have.” You don’t remember the last time you’ve had such a meal, and you thank God that you are fortunate enough to have this experience.

The other is Olga’s, the small grocery store in Nerano. Olga does the bill with a calculator. There are no computers. “Duodeici,” she says, and “per piacere,” you answer. Olga notes with concern that you have selected a can  of black olives to binge on. “Mangiare?” she asks, motioning to her mouth. “To eat, or to cook?” “Si, mangiare,” you reply, salivating. Olives. ” Veni qua,” she says, and gives you a plastic container of olives swimming in their juice, fresh, packaged near here,  instead of in Spain. You take the olives, the bread, the salami, the little bottle of limoncello, and you eat all of it in some weird post-lunch snack sitting out on the balcony. There is no pretense, no tourist angle. Olga is just unhappy at your olive choice because you are a tourist and you don’t know better.

Those were the two best moments.

The last day in Italy you spend in a hotel near the airport in Fiumicino. It is the best single day. There is seafood again. There is pasta.  That was the same as before. But now, there is also civilization.  You sit on the balcony and eat biscotti and watch fisherman on the dock and parents walking with babies, and society, life.

You are shy, desperately shy around people in person. You will never introduce yourself first because you don’t think you’re interesting enough for them to pay attention to you. You are worried what people think about you. But you need to be around people. You draw energy from them as a writer. You draw inspiration. You mentally record that couple with the baby stroller, the older fisherman with his grandson, the waitress at the restaurant who knows English, and her mother who doesn’t. The little girl playing strange German music, who goes from the wilds of the hills to Naples once a week; she is hoping to get into a music school.

The sea, on the other hand, and the hills of trees, scare you; you are an only child, you live with another only child,and you are still scared of solitude. Life should be a busy coffee shop where things happen around you while you’re observing from your table. The Amalfi coast is just you and yourself. The sea reflects only you, and you don’t think you like what you see.   Right, and the possible murder. 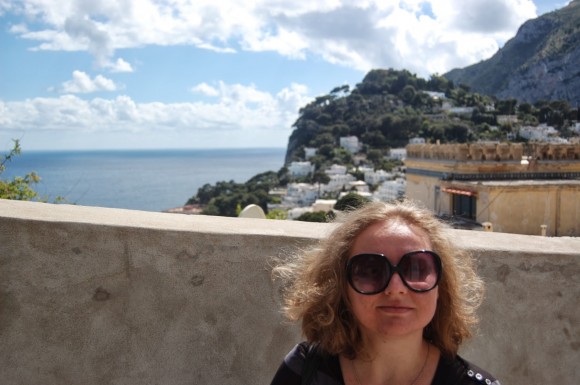 And there is still the sea, shining, glistening, glimmering out of your window here, too. It looks more Mediterranean here, for some reason.

But it’s safe here in Fuimicino, near where the planes are landing, where you sleep and watch hundreds of apartment lights turn off at night, hundreds of people calling to each other. The sea will not murder you here.  Here, there is free WiFi.