How to be full-on Jewish half of the time 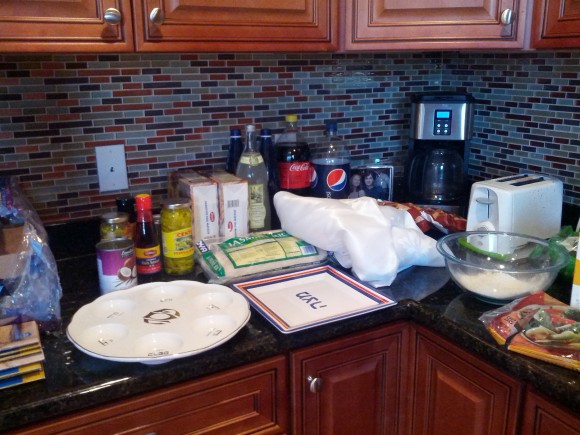 Several glasses deep into a bottle of wine a couple months ago, my friend and I decided we needed more Jewish rituals in our lives. She has a toddler and wants to make sure he is steeped in Jewish tradition, but, also being ex-Soviet, is not sure how to go about doing it.

So, this past weekend, Mr. B and I hosted a Passover seder. We probably shouldn’t have, because people really only do seder the first two nights, I think.  I’m not 100% clear on seder rules. But, I had some time last Saturday and all of our friends were free, and it was marginally during the week of Passover, so, that’s when we decided to have the seder.

I started out trying to be really hardcore about it. I bought matzah and matzo ball mix for soup and I broke out the Maxwell House haggadot. I asked my friends to bring a flourless cake.  I looked up traditional Passover dishes. Is salmon one? I thought it might be. I read up on the Passover legality of rice. Verdict: legal, but only for Sephardic Jews, a.k.a the only ones of us that know how to cook.

Then, I had class three out of seven nights last week and worked late the other four, so I had no time to think about Passover until the morning of the seder, when I woke up and cooked like crazy.

Somewhere in the middle of the cooking and cleaning, I decided having a meal ready to feed hungry people was more important than following kashrut, so I made bourekas, which definitely have dough, to supplement the appetizers. Then, I decided I was craving a curry, so I made red thai curry, Ashkenazi traditions be damned.

By the evening, our guests started showing up. Our friends with the toddler were running late because of his naptime, so we waited until he woke up to eat and have the seder. “Start without us,” my friend texted me, but I told her I wanted to wait so we could all be present for the seder that we had decided was important to us.

Finally, everyone sat down at the table, and I hurried to put the hot food and soup out. “Are you doing seder,” one of our other friends, who actually knew what was going on Jew-wise, asked me. “Yes, I want to do it.” Last year I was also intent on doing seder, but just managed to mumble the beginning prayer in the haggadah and made everyone eat. I had no idea how to do seder. I was terrified.

“You probably shouldn’t have served the soup,” he said. “Seder is long and your food will get cold.”

“Can we do the Cliff Notes version then,” I asked. I was really interested in having people eat, with just a bit of tradition on the side.

“Ok,” he said. “Want me to do it?” I looked at Mr. B, who had the same Fear in his eyes that I did. The Fear is something all Russian Jews get when faced with religious rituals they know nothing about. Half of the people at the table had the Fear in their eyes. .

Everyone became very pensive, possibly at the prospect of not eating for another half hour.

“Do you have enough red wine,” my friend said. “We’ll need to drink a lot of red wine.”

“I think so,” I said. Luckily everyone had brought at least one bottle. I ran to give it to Mr. B to open and distribute. We drank.

“The next part is handwashing, but we can probably skip that,” my friend said. “I lathered up with Softsoap just before you came,” I said hopefully. Everyone nodded, looking wistfully at their soup.

My friend reached for the haggadah. “Do you have the bitter herbs,” he said. “We need to dip it in the salt water.”  I had no idea that the stuff on the seder plate was actually put into use. In all my previous seders, the plate was just an artifact of , “HEY, WE HAVE JEWISH SHIT IN OUR HOUSE!” Now, it was actually functional.

“Be right back,” I said, and ran to the fridge to cut up more celery. I filled a bowl with salt water and passed it around.

“Ok, now we break and dip the matzah,” he said. “Be right back,” I said, and ran to the kitchen to get some horseradish. People fell upon the horseradish and the matzah, famished. Their steaming-hot soup lay untouched. “Now, go hide it.” I looked at the toddler, who was being plied with bourekas in an effort to keep him quiet. “Will he find it,” I asked my friend. “Next year,” she said, and stuffed the chometz I had cooked into his mouth.

The seder had been going on for fifteen minutes by this point.  People were trying to partake in the meaningful rituals, but were mournfully eyeing their soup, which was getting colder and colder. Finally, we reached the end. “And that’s the seder,” my friend, who had been conducting it, had said. “Awesome! Dig in,” I anxiously laughed, breaking what was supposed to be a beautiful ritual silence.

Everyone gratefully started eating, and then the real ritual began, the one I had always known: the clattering of plates, the clink of wine glasses, the sound of spoons against bowls. People talked for a bit, then everyone quieted down and got to the real work, eating the soup.

As they ate, I looked around. Was this a real seder? Most of us were intermarried or dating non-Jews. There was a half-Jewish 4-month-old, a half-Jewish two-year-old. Then there was a mentally-unsound half-Jewish 624-month-old, trying to make sure that everyone was getting the full-on Jewish experience.

As everyone ate and laughed and passed the matzah and poured the wine, I thought about all the articles I’ve read that react with alarm to The Second Holocaust, which is Intermarriage. “Second Holocaust” alarmists posit that anyone who intermarries will be lost to the Jewish people and basically the fact that you are marrying out of your minority that only makes up 1% of the U.S. populations means you won’t have anything to do with being Jewish.

What did Mr. B and I, the Jewish couple, do to continue the holiday? Mr. B ate some matzoh. And I hosted a religiously-inaccurate meal, for which we didn’t even completely understand all the reasons. And I served mortifying Sephardic rice. So who is really perpetuating the erosion of Jewish traditions? (Mr. B.)

But, we were all together, eating, laughing, and drinking. A week later, I’m still thinking about how warm and happy I felt to have people in my home, celebrating, coming together for something larger. The other thing I’m thinking about is, of course, how God will punish me for making curry.  And if that’s not at least 50% Jewish, I don’t know what is.