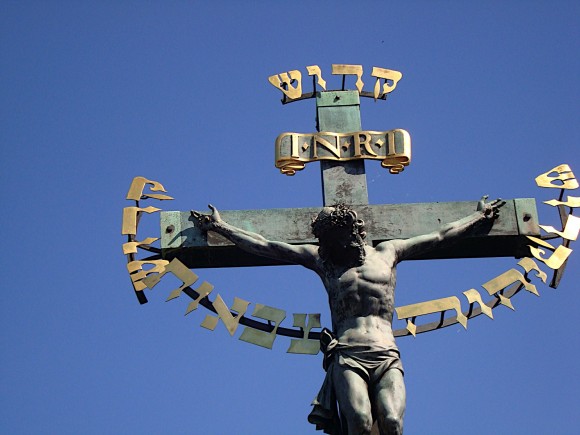 This Monday, I was asked to deliver a toast at the first seder Mr. B’s family had. I am a terrible public speaker and enormously shy, even with people I know,  so I refused, and Mr. B’s grandfather gave a short toast to the health of the family.  But I have been thinking about what I would say for a Passover toast, and this is what I’ve come up with.

Jews are an inherently neurotic nation.  I suspect this comes from thousands of years of being kicked out of anywhere we started to do well at anything, sometimes by legal edicts, sometimes by the Inquisition. There was one instance in Prague where some Jewish dude pissed off the local goy community so much that they made him purchase Hebrew letters made out of gold spelling out “Holy of Holies” above a statue of Jesus Christ on the Charles Bridge, still a major tourist site today (that’s the picture I took of Him.)  If that isn’t enough to make the next few millennia full of anxiety without Xanax, I don’t know what is.

I’ve inherited many of these traits, unfortunately. One of my biggest fears, among the many that I have, is that much like Shalom Auslander, is that when I’m doing really well, God will realize it and strike me down with an illness.

For example, right now I am terrified that I will discover something (I can’t even write out what I think I could possibly discover, in case God is listening,) and that will prevent me from finishing my novel. Then people will only be able to read what I’ve written so far and pore over the manuscript like some ancient Rosetta Stone. “Boy, was she a moron,” they will say. “It took her a year to write this drek?”  Another current fear is the Siege of Leningrad.

In the late winter, anxiety becomes not only a Jewish thing; it becomes human.  All of my friends, both chosen and not, are frozen.  It’s been a long winter, too long. It snowed last week in Ukraine and Moscow and everyone was all, “WTF” on Instagram. If you can make even Russians believe that it’s been snowing for too long, you messed up big-time.

Everyone is holding out for May. Some friends are looking for a change of  pace at work. Some are looking to get away desperately from new babies that they love, even if just for a couple of hours. Some are looking to leave the country.  Some are waiting for beach weather.  Some just want to forget this not safe for work or life image. We are just all antsy.

Whatever it is you’re looking for in the mid-February slush, spring will give it to you, in any form that you look for it. and for Jews, this form is Passover.   Pesach is a holiday of hope more than freedom, but that’s just about the same. If you are hoping for something and not thinking about your current problems, then you’re breaking free from the anxiety trap you’ve set for yourself and let positive emotions carry you through.

Often, our anxiety comes from being in our heads too much.  I’m inside of my own head a lot, and all I hear is my own voice, full of insecurities, worries, and rumors. I know that sometimes we just have to completely disconnect the phone cord tying our reptilian brain to our monkey brain. This is harder than any other task I’ve ever done, and if you can do it by thinking of things you hope about, rather than things you hate, that is freedom, and that is Passover.

I have been inside my own head all winter. I’m trying to crank out my novel, finish another semester of classes, keep up at work, make time to go to the gym, and learn how to program. When I see this list of things every morning, my eyes cross, and I become anxious, because I can’t be good at all of them at once. Something has to be a priority when other things are not.  When you think you’ve done all the things, you haven’t.

So for this spring, my hope is this picture: 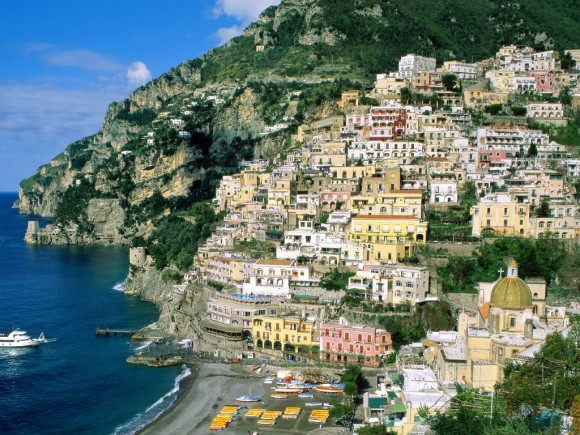 That’s the Amalfi Coast in Italy, where we’re going on vacation this year.  I am hoping that if I am drunk enough off limoncello, I won’t be inside of my head as much. When Mr. B decided we were going to Italy and I saw this picture for the first time, I became more relaxed than I have been in months.  Five days of sitting on some balcony, drinking local liquor, and psuedo-writing. Just like Hemingway!

Of course, there are anxieties that come with this trip. One of the things I’m afraid of is that we won’t book our place to stay in time and we’ll have to sleep on the beach. Another fear is looking too fat in photos. You can’t look fat in photos on the Amalfi Coast. For example, look at this guy. Doesn’t fit into the scenery at all. Another concern is, of course, dying on the way to the Amalfi Coast.  You know, the usual mix of problems.

But I guess my major spiel is that you don’t need to take a vacation to a place where you’re likely to have your  non-existent $5,000 watch stolen as you’re “strolling”. You can have moments of hope at any time.

Two weeks ago, I was waking up before dawn and trudging to work in the slush.  This week, I saw the sunrise and heard the birds for the first time. I went to look at my tree and saw that it had started to let out tiny buds. I made it, my tree said. _You and me both, buddy, _I told him silently while watering him in the mild flurries that started before dawn.