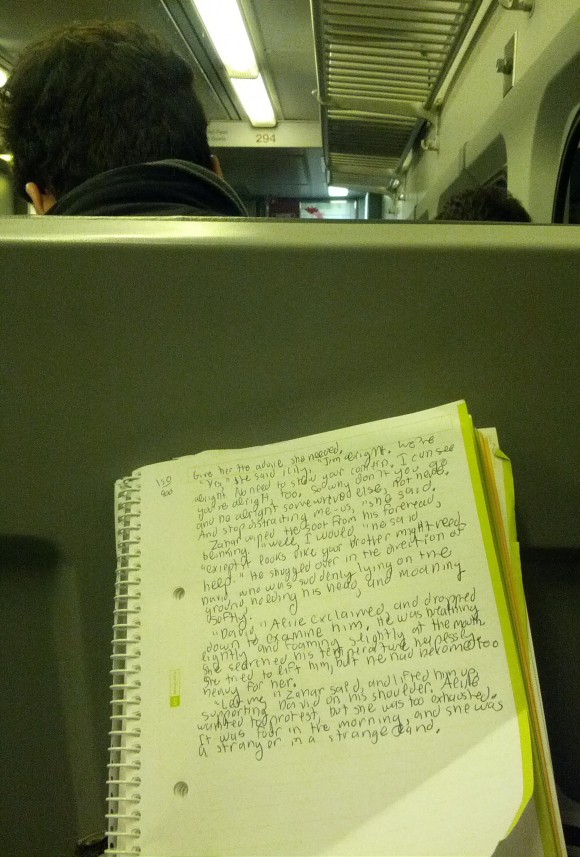 I usually work on my novel in this position: sitting on the train on the way to work or from work, notebook on my lap.

Despite the fact that I’m surrounded by people, it’s a really lonely way to work, as writing usually is.  The ideas come hard and the words come harder. In half an hour, I can do around 600 words, which is nothing in the scope of 90,000.

Typing up what I wrote the day before is just torture, because it is all so terrible.  Just horrible, godawful phrases, characters who are flat and have no feelings, and ideas that are stilted and lame. It all seemed so big and beautiful and noble in my mind, but the minute I put it down on paper, it deflates. And I’m not allowed to touch it, to edit it until draft 2. So I’m just recopying crap.

I know I’m not alone. There are hundreds of essays devoted to encouraging writers, to teaching us how to write. There’s a hashtag, #amwriting, where you can go on Twitter and see who’s plugging away at any time of the day or night, and what their wordcount is, and hate them because they are writing more than you.

I would quit while you’re ahead. Really. It’s an awful field. Just torture. Awful. You write and you write, and you have to throw almost all of it away because it’s not any good. I would say just stop now. You don’t want to do this to yourself. That’s my advice to you.

And even still, when I am writing, I am alone with my horrible, stilted characters, who I feel hate me because I am making them look stupid. “We’re smarter than that,” they say, and they’re right. I just have no idea how to make them jump off the page and probably won’t until the second draft, but I can’t get to the second draft until I finish this chapter, but how can I finish writing this chapter which is an insult to the English language?

Meanwhile, all around me on the train are people doing normal people train stuff: playing Candy Crush, filling out Sudoku, reading New York Times bestsellers, scrolling through Facebook. And it makes me feel even lonelier, that they don’t know.

Which is why last night was so awesome.

It was 8:00, after a full day of thinking at work followed by thinking in class. I was getting on the train, exhausted, ready to call it a night, plug my headphones in, and fade into oblivion, when I saw the guy in the seat ahead of me scribbling in a notebook. He was obviously working on a piece of writing.  He had about four lines down and the rest was blank space. He was staring out the window, in deep thought.

I sat down behind him, creeper-like, and, despite the fact that I’d had a full day and I could technically just say, screw it, I got out my notebook and also began to write.

Writing in rhythm with this guy was so strange, but made me so happy. “I bet he’s struggling with how he wants to phrase this scene,” I thought. “I bet he’s thinking of a character name right now,” I thought, and kept writing myself.

Every time I lost some steam and my attention wandered out the window, I looked ahead at him. He was diligently writing. Chastened, I’d go back to my own work.

As I filled up line after line, I remembered back to when I was 15 and still reading Seventeen magazine. At that time, I also wanted to be a writer, but didn’t know how to do such a big thing.

One story they printed really resonated with me. A girl who wanted to be a writer wrote in saying that she didn’t have motivation to write, and what could she do?

The editors wrote back that the best way to get motivated to do something was to imagine other people out there, just like you, doing the thing you’re doing now instead of watching TV or making meth, or whatever it is that 15-year-olds these days do.

Can you imagine that person getting better and getting published while you’re doing nothing? If you can’t, get off the meth-making stool and get writing.

These imaginary other people writing have always been in my head, writing in the woods, writing in big fancy corporate offices, and lately, writing on their Macbooks in coffeeshops, working on their second or third novels.  Since Twitter became big, these other people have been easier to see, writing.

But nothing was as real as seeing that guy on the train last night, working, struggling filling up word by word, line by line, laboring on and on, completely unaware that some unhinged woman was watching him and would later be blogging about how unalone he made her feel.