Ottawa is for Real Russians 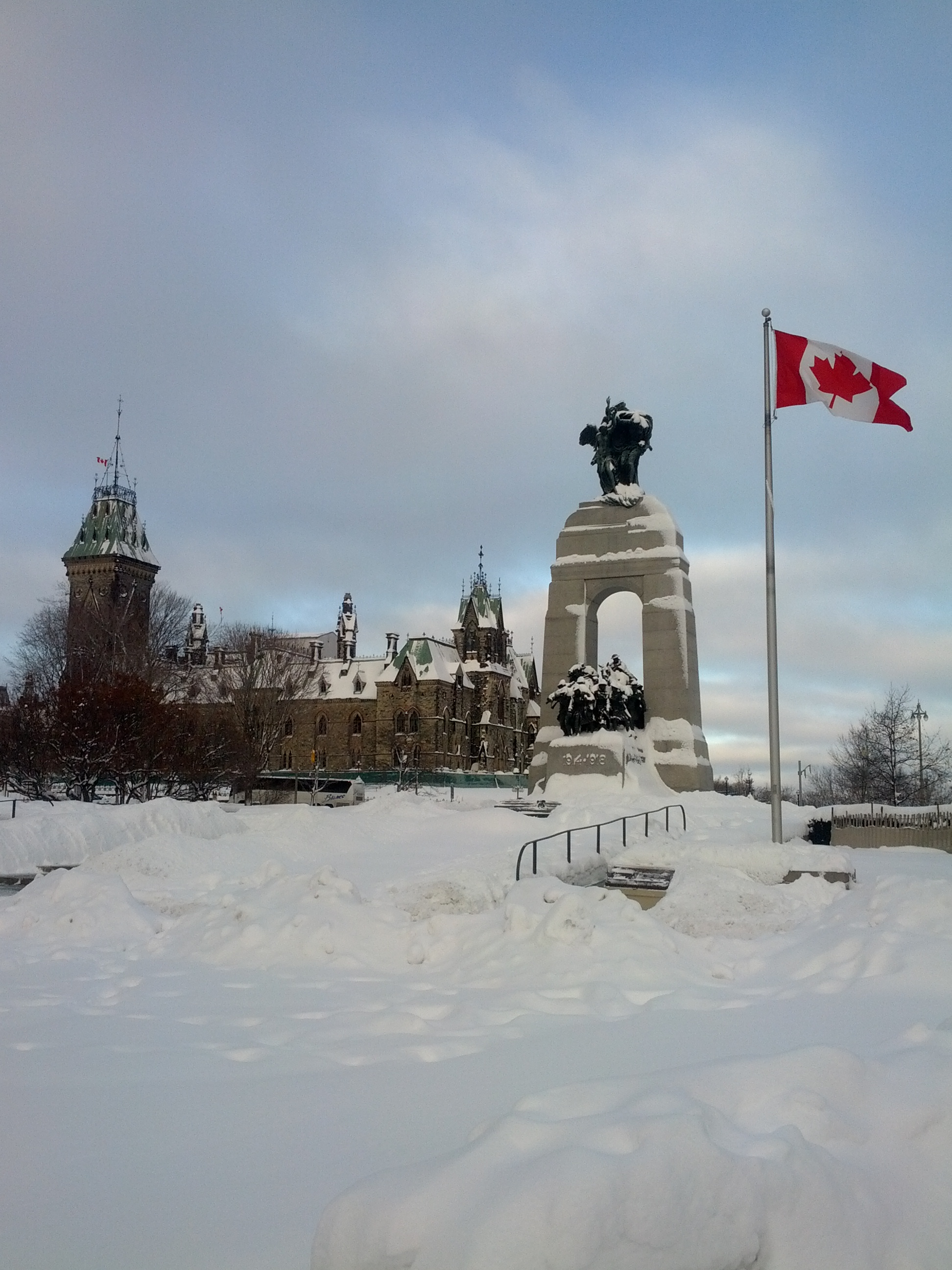 A Russian New Year superstition is that the way you usher in the New Year is the way you’re going to spend it. If so, 2013 is looking pretty cold for me.  We celebrated the New Year with my parents in Ottawa, which is derived from the Algonquin phrase for “holy shit, the windchill.”

When I served in the Soviet army in Siberia, it got to be around -55 degrees at night when we had guard duty. I had the beginning stages of frostbite once,” he said proudly. Where,” my mom asked, alarmed.  “In this finger. They had to cut it open and drain it of pus. It was mostly white. They drained, like, two thirds of it,” he explained as we ate  our dinner. “By the way, are you sure this is meat? Mine tastes like cat,” he added thoughtfully and continued to chew. 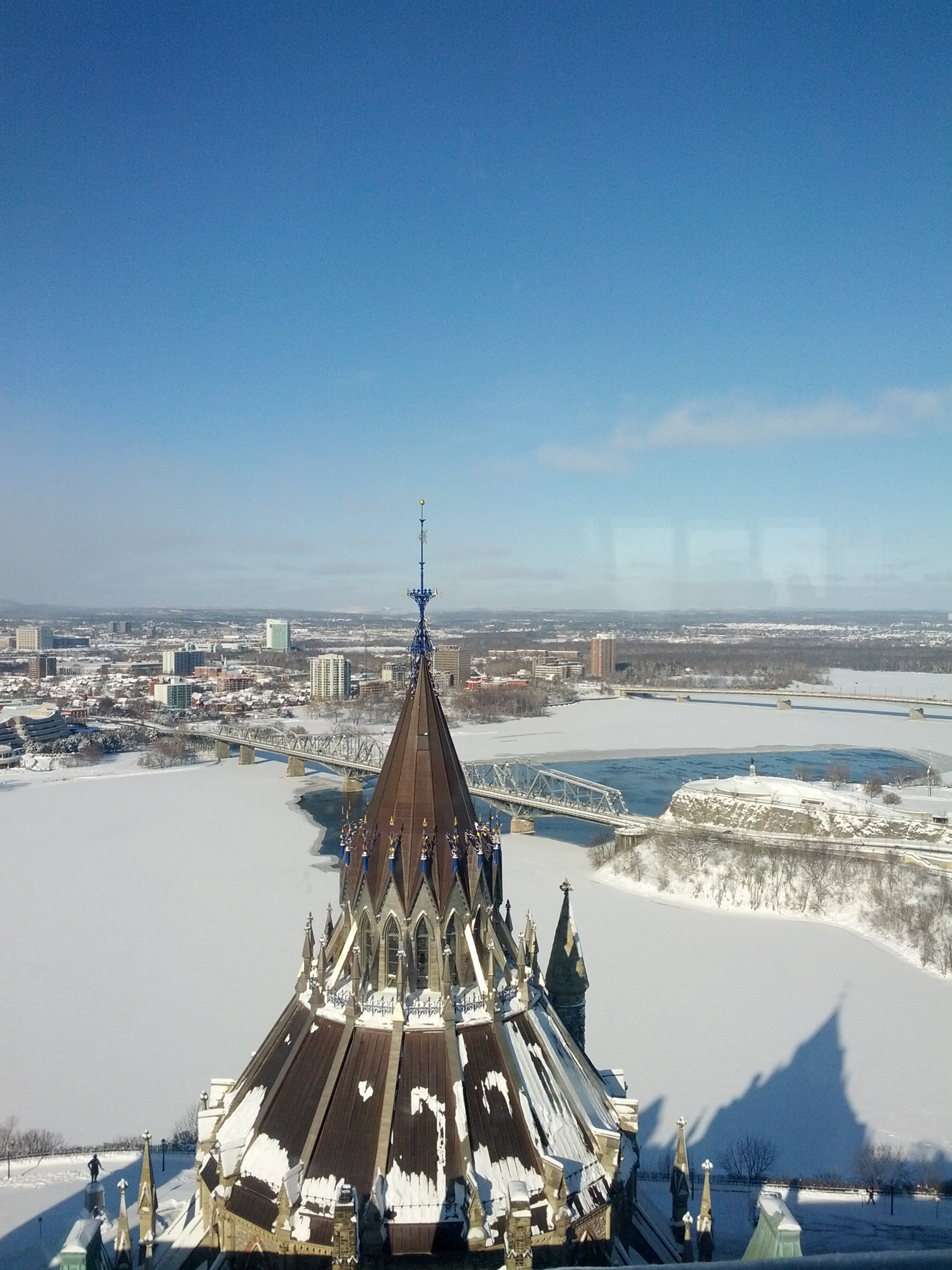 Because most of Russia (except Sochi, which is a seaside resort town and the place where the winter Olympics are going to be held,) is closer to the North Pole than civilization, Russia is prepared to deal with snow, which happens anywhere from October to March. There are millions of songs about snow. Snow and New Year. Snow and flurries. Snow and strolling through birch trees. Snow and alcohol. Snow and everlasting existential sorrow. Morozko.

There are not as many songs about, say, everybody surfin’ like Californ-i-a. Russians are uncomfortable with summer. They hate ice in beverages. They don’t have air conditioners (“you can catch a cold from them.”) And they don’t sell water.  Mr. B’s uncle was in Moscow during the summer of the forest fires and went into a store to ask for cold bottles of water. “We’re don’t have any. Just the beer,” they shrugged.

You get the idea. Real Russians like to masochistically be cold, and they will go anywhere to get it.

Mr. B and I are fake Russians because we were brought up in the United States, so we like crazy American things like staying warm, being inside when snow happens, and Phoenix, Arizona.  As a result, Ottawa was PERFECT for my parents.  They got their snowy New Year, their windchill, their fur coats, their memories of their childhoods. 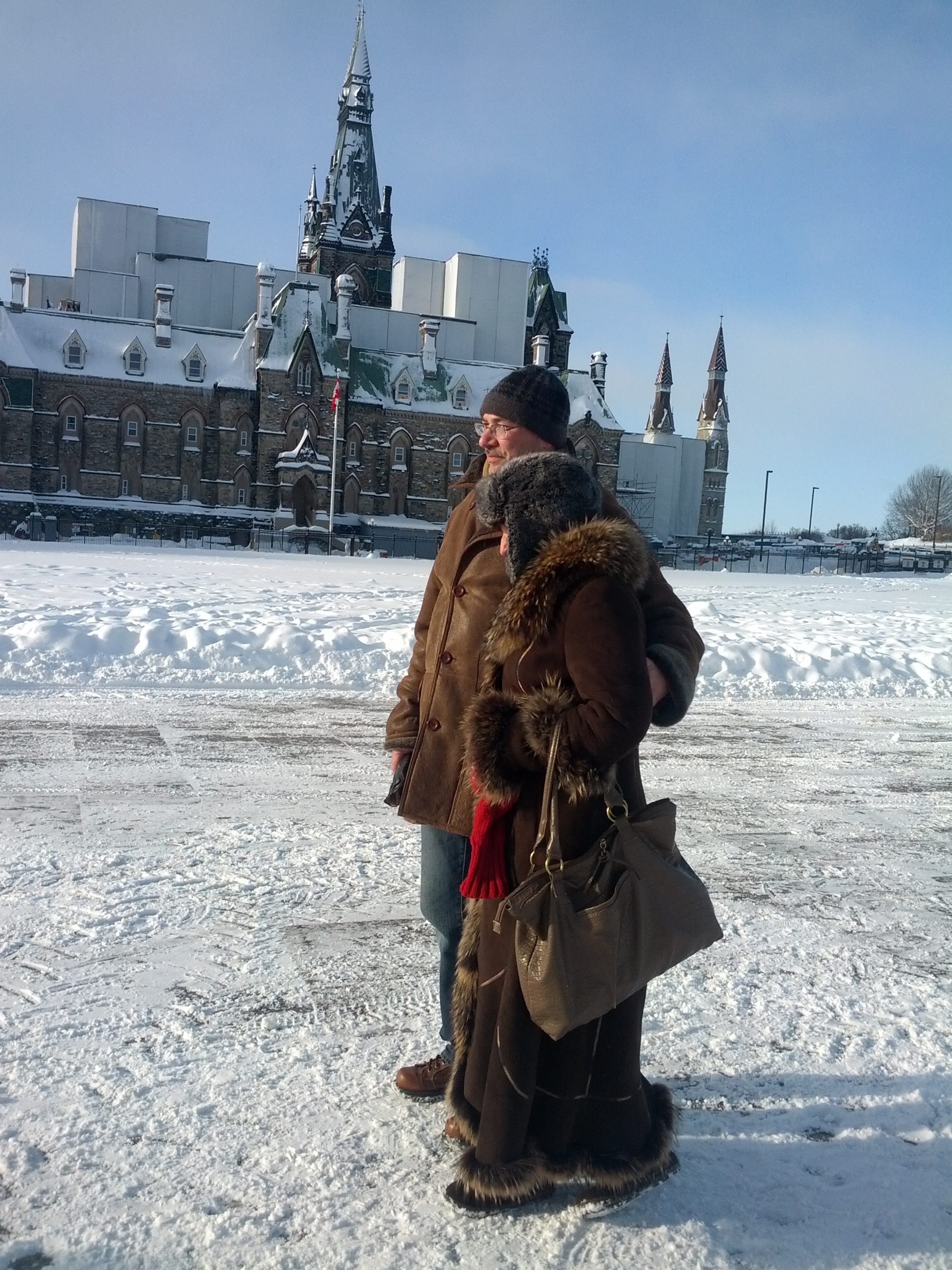 For us, Ottawa was at least four layers of clothing every day.

To be sure, it’s a really interesting place. Ottawa, as the capital of Canada, has beautiful architecture that they copied from England. It has great restaurants and delicious patisseries since it’s right on the border with Quebec. It has very cool museums and beautiful views.  Just take a look at Ottawa’s tourism Facebook page!

What’s that, you say? All the people in the pictures are wearing shorts? It would be smarter to visit Ottawa in the summer, you say? 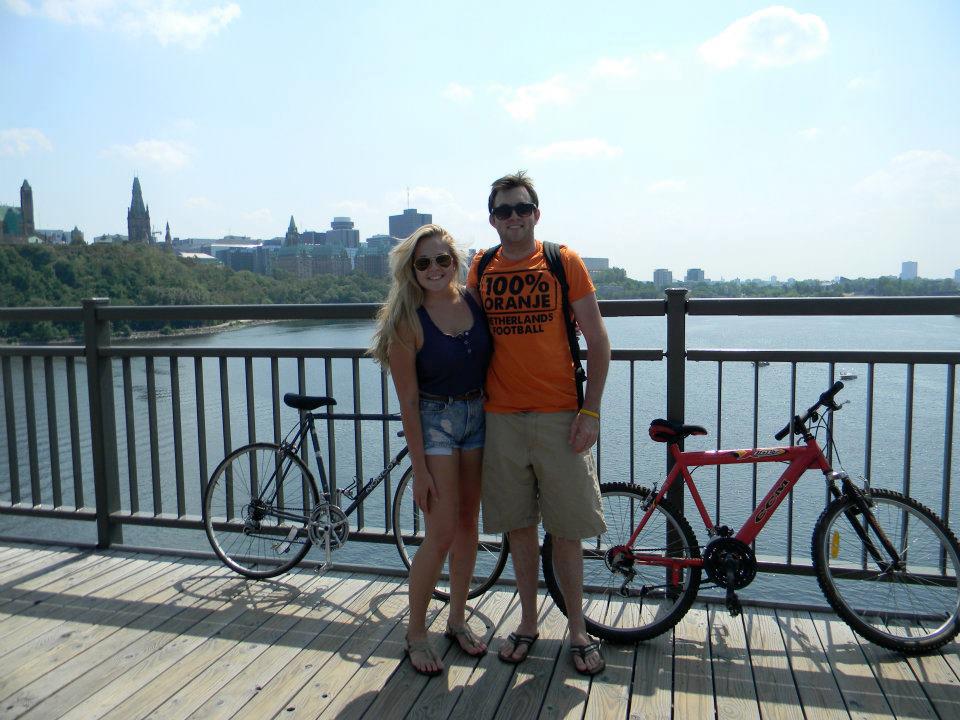 Well, yes, but that’s not how real Russians do things.  This was our Ottawa: 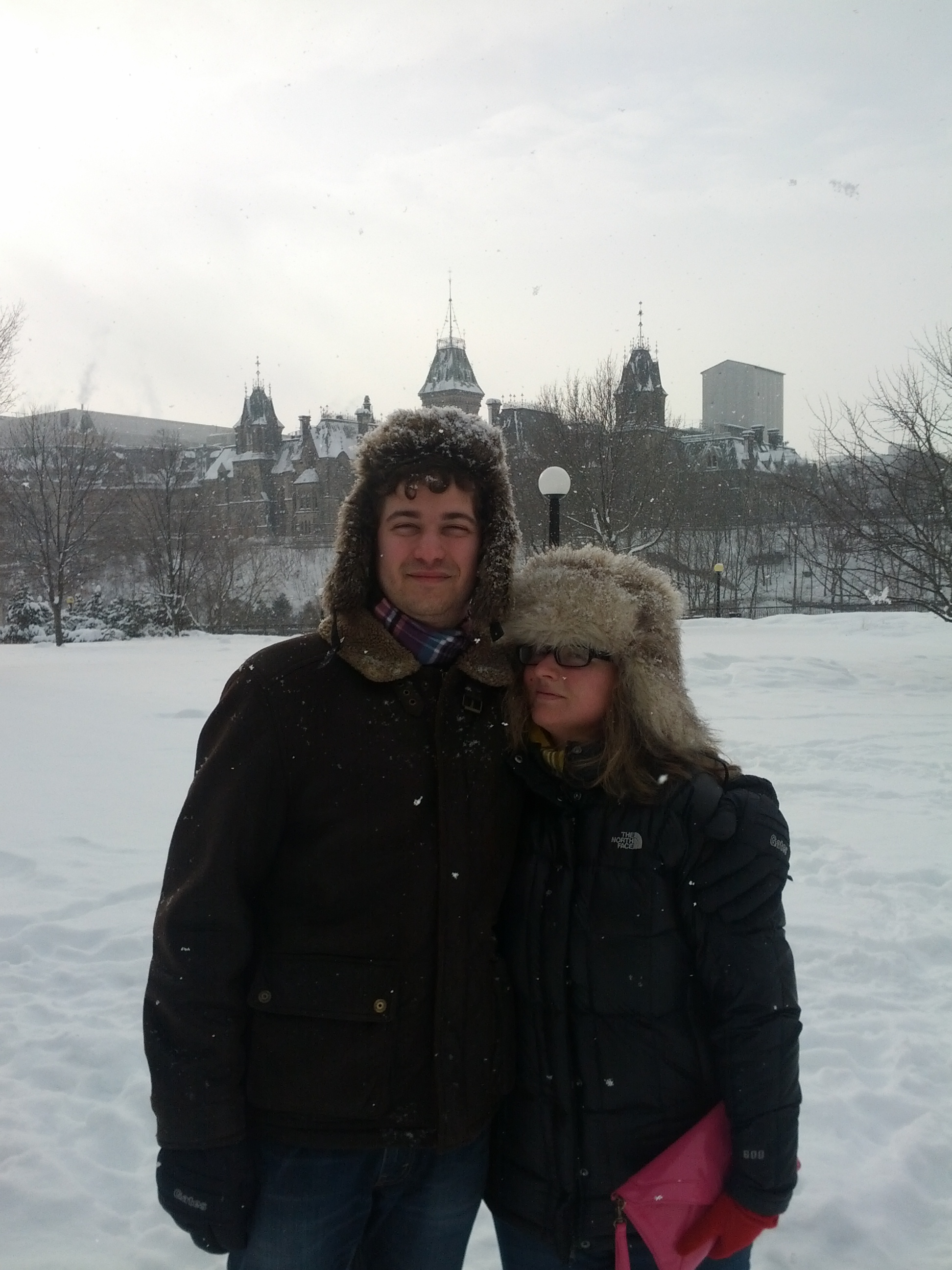 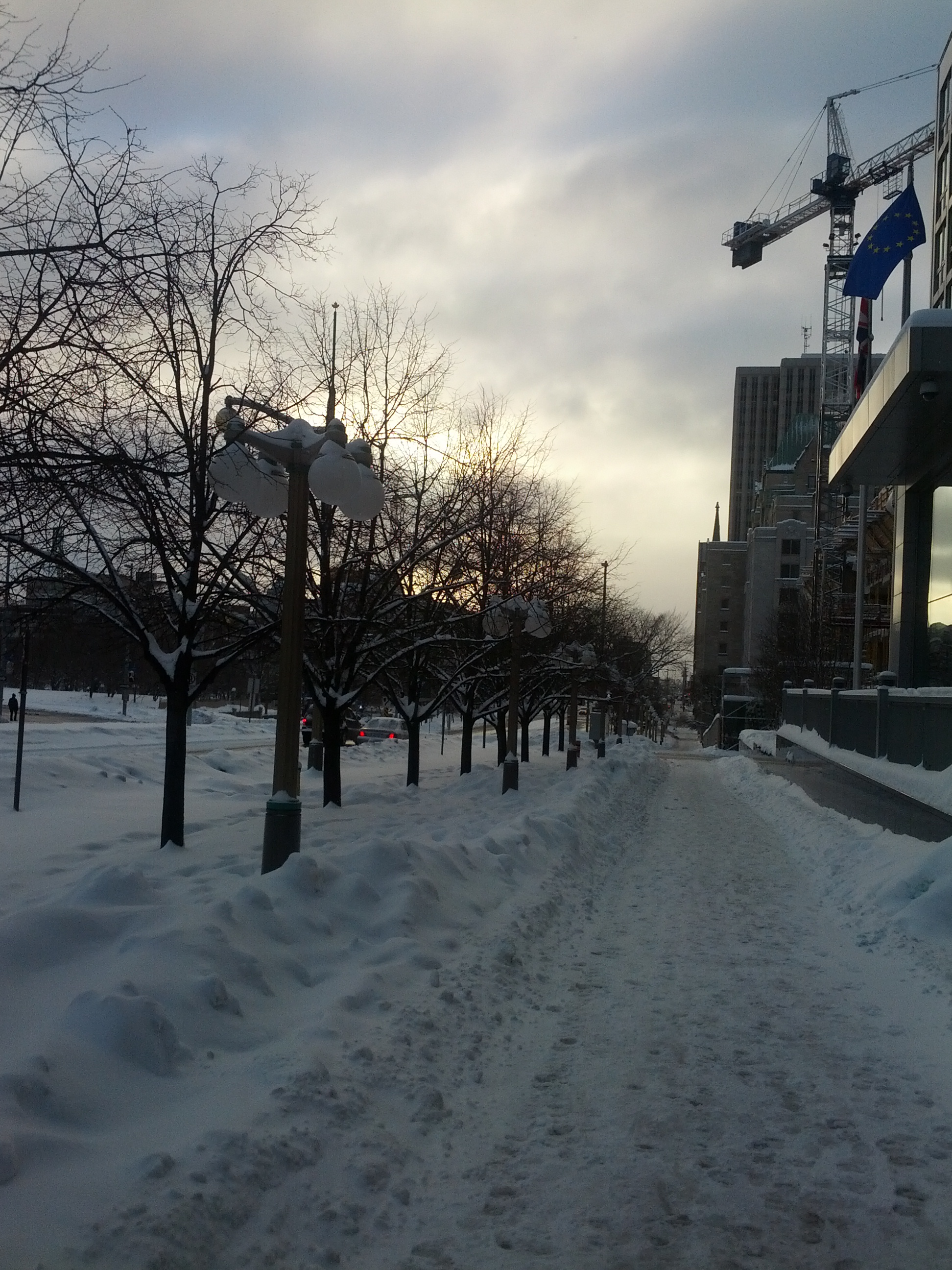 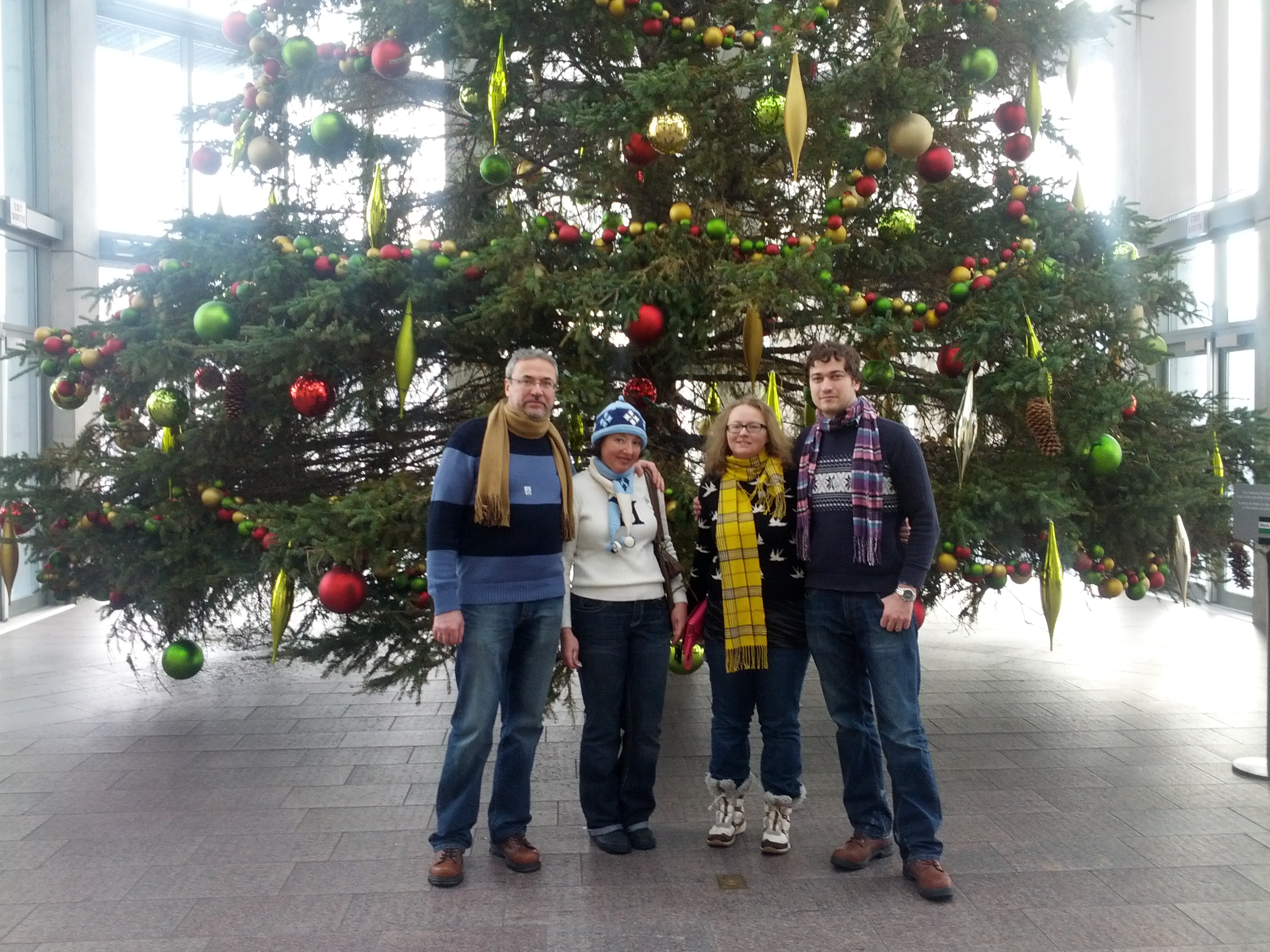 Luckily for me, Canada is not only cold and French: it’s also Scottish! Scots are the third-largest ethic group in Canada, and it’s very obvious by the street names and the fact that each province has an official tartan.

I can just imagine how this conversation to go to Canada went, somewhere in the Highlands, after the Highland Clearences. “Hey Donny, the weather’s brutal here and we just lost all our land. What d’ye want to do?” “How about we go to a place where the weather is EVEN WORSE for people who wear kilts and we’ll be miserable for 200 years or however long it takes to invent central heating?” “Done deal, lad!“ 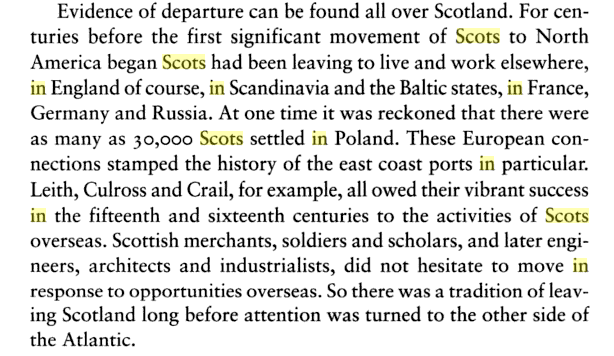 As a result, Ottawa experimented with its first ever Hogmanay this new year, which meant that not only were there snow-lust driven Russians walking around in furs, but there were also Scotsmen in kilts. I’m guessing they were waiting for frostbite to come upon them so they could shank it into submission with their sock daggers. 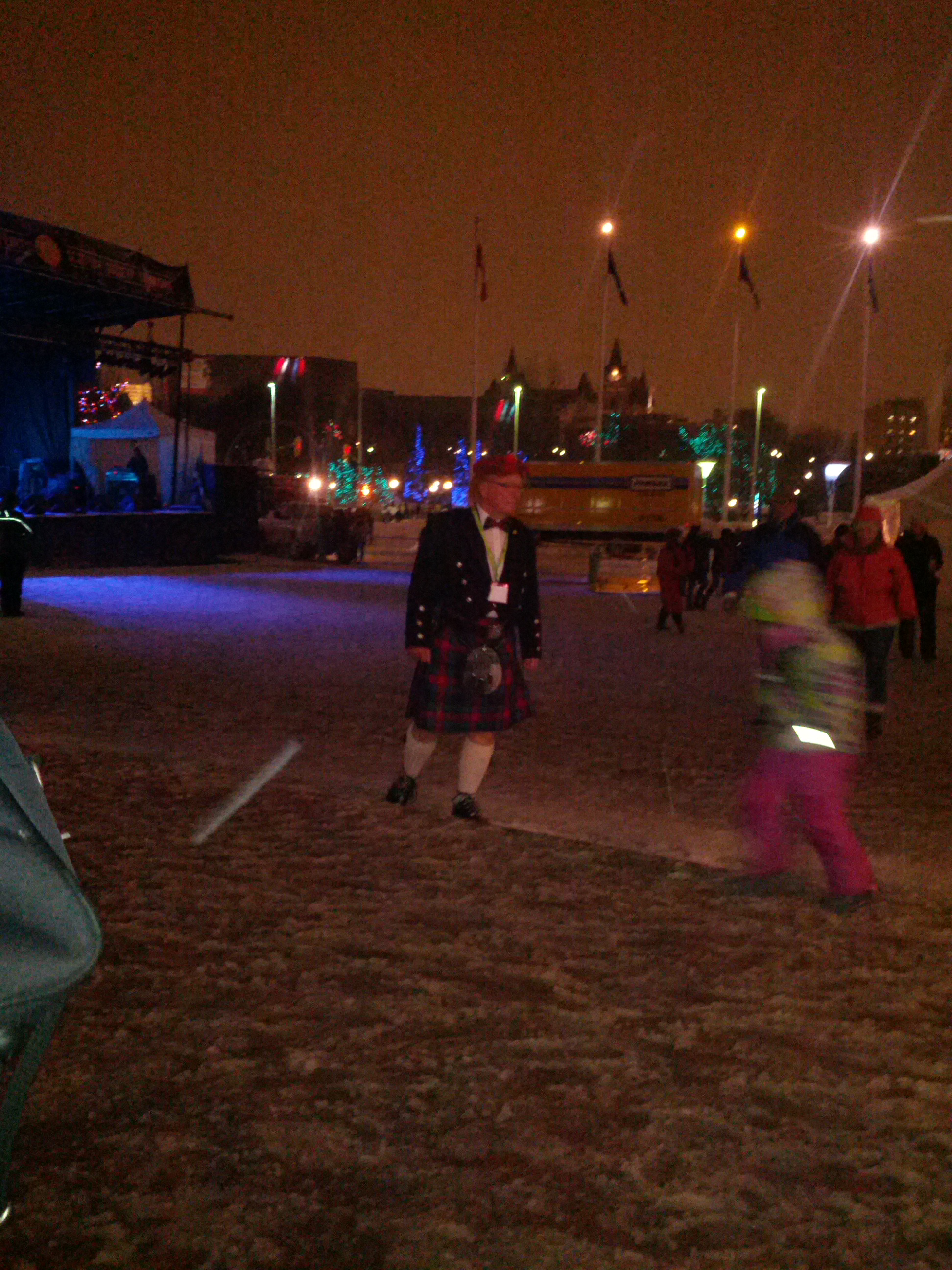 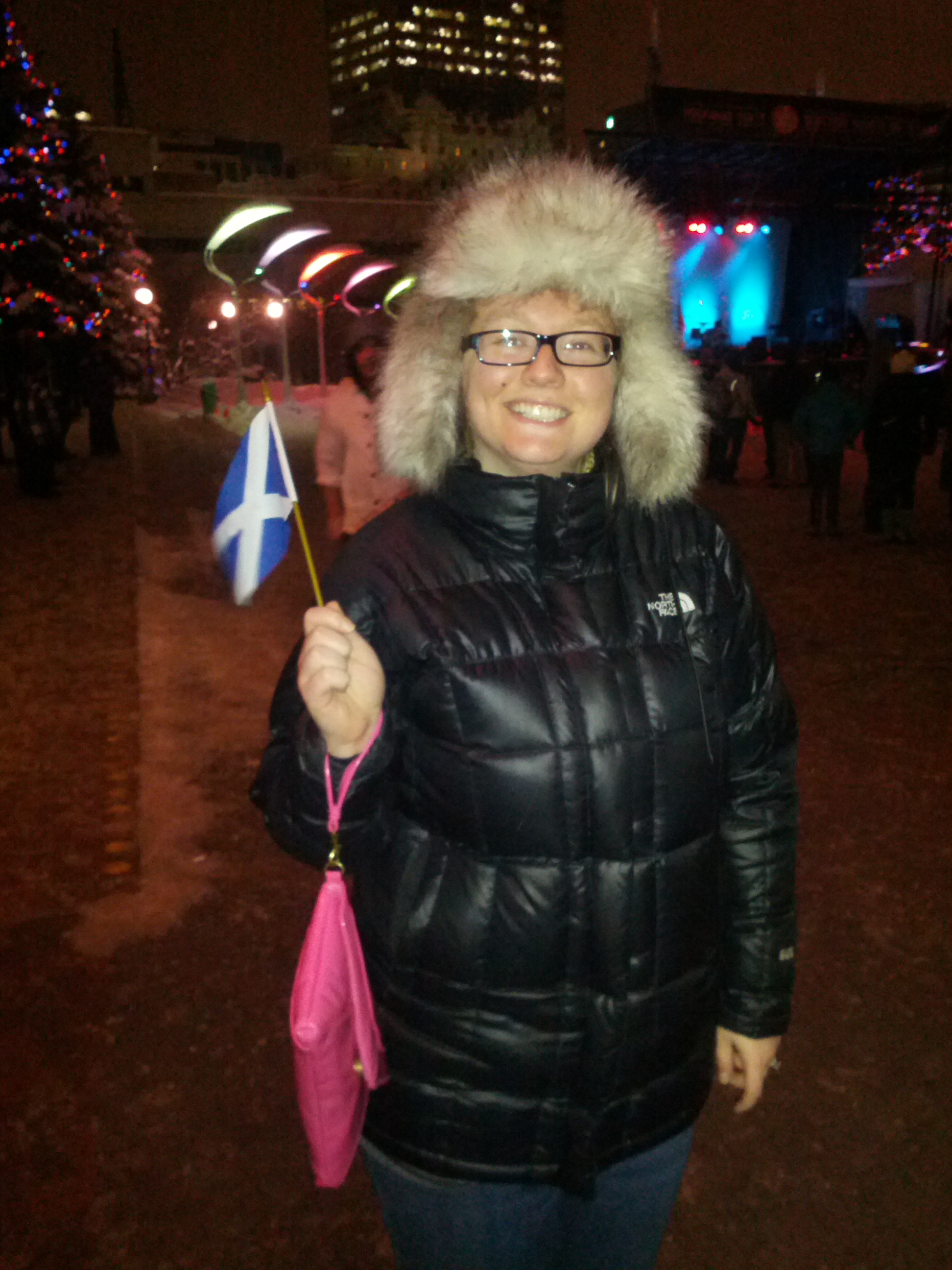 That flag cost $2 Canadian. If you’ve never seen eternity, it’s a Scot struggling to sell a flag for only $2 and a Jew struggling to buy it for that much.  Please note that this picture is the only two seconds in Ottawa that I was not wearing gloves. Even indoors. Even in the shower.

We rang in 2013 on Slater Street, where they’d recreated a Times Square experience, complete with band. My parents snuck in champagne and we drank it as the snow fell softly and quietly around us in the first moments of 2013. 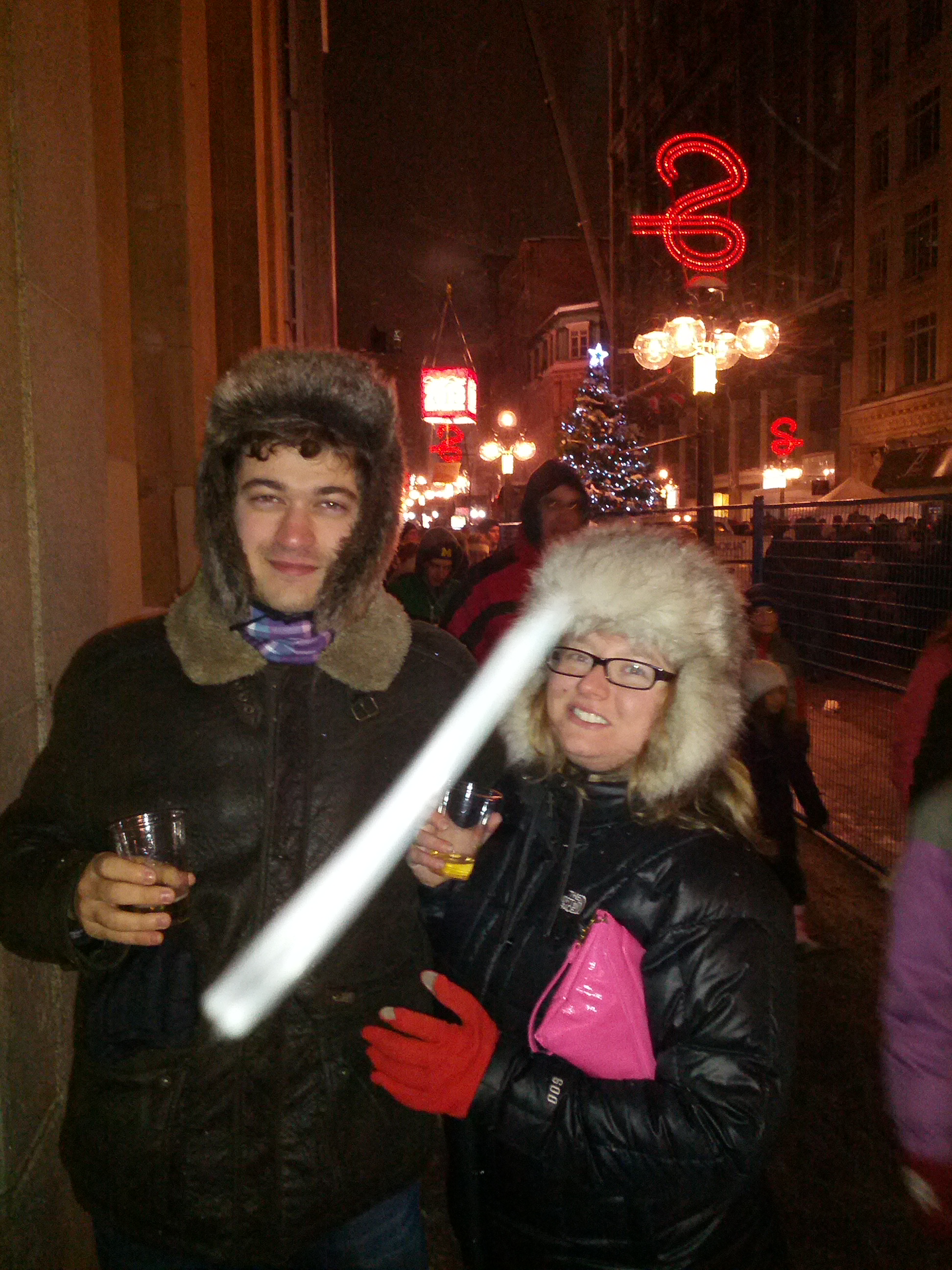 “Rabbit, rabbit, rabbit,” I whispered quietly to myself and let all my hopes, dreams, and fears float up into the atmosphere to brew for the New Year.

“What are you hopes, dreams, and fears,” I imagined Mr. B asking me.

“I’m afraid that my bones are now frozen through and I’ll never be able to feel again, but I hope that I’ll thaw once we hit a balmy 35 degrees Farenheit back in Philly. I dream of watching TV in bed in my sweatpants,” I said in my head.

Life is full of simple wishes when you’re living on the edge of existence.