Alone in the Siberian wilderness 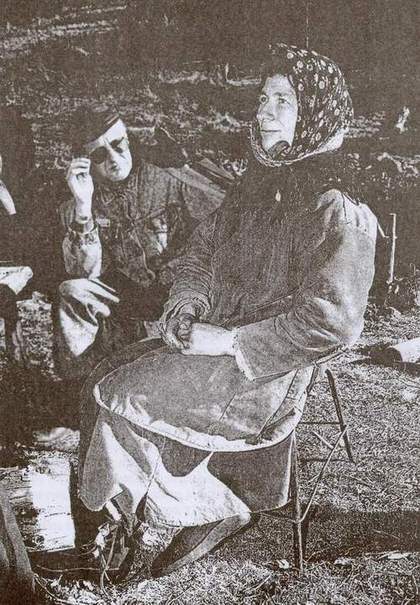 This amazing story, about the Lykovs, has been going around the internet lately, and thank you to everyone who’s sent it to me, confirming my belief that you like to think of me when you see anything remotely Russian AND remotely creepy.

The first time I heard about this family was from my mom.  I was maybe ten or eleven, and she was trying to brush my hair into a manageable display of something, and I was  yelling for her to stop because she’d found a particularly nasty knot.

“You’re just like Agafia Lykova,” she said.  “Do you know who that is?”

“There was a family discovered in Siberia sometime in the 70s that went there after the Russian Revolution and lived there all that time, and when Soviets discovered them, they didn’t know anything about the modern age.  They were staroveri–Old Believers– and they didn’t know about electricity, didn’t brush their hair-” here she paused pointedly between fierce strokes, “didn’t know that man had landed on the moon, didn’t know World War II had happened, nothing.”

This story immediately sparked my imagination. “How did they know how to read? How did they speak to each other? Did they talk to other people?” I asked.

But my mom didn’t have the creepy details I was interested in.  “I remember mostly that they were a  huge sensation when they were discovered, and people would make fun of other people that were unkempt or backwards by calling them Lykovi.”

I wanted to know so much more, but there weren’t any answers, because there was no Google.  I was on my own, this memory of the Lykovs only confirmed by my parents. And now there is a whole English-speaking internet wondering about them.

I am drawn to people making on the edge of humanity, such as of Rory, who walked Afghanistan, and Felix, who jumped from space. Why do we do the things we do to isolate ourselves from everyone else? But, looking back at the Lykovs, I am less fascinated with the fact that they survived for fifty years on their own, sometimes through heartbreakingly cruel acts like eating leather, as I am that they only understood humanity through the lens of their parents.

The Lykov children knew there were places called cities where humans lived crammed together in tall buildings. They had heard there were countries other than Russia. But such concepts were no more than abstractions to them. Their only reading matter was prayer books and an ancient family Bible.

It fascinated me the most, because I got it. For me, growing up in an unimaginably tiny Russian community and no real internet until I was 14 or 15, my parents were my only source for Russian culture. As a result, I grew up with a version of Russian culture that was the culture of their childhood.

My mom used to force me read Russian stories to make sure I didn’t forget the language. But it was always stories and poems she had been taught in school, usually Pushkin, who I was too young to appreciate, and I would constantly cry from frustration and hatred. I could relate to Margaret.  I couldn’t relate to Pushkin. His solemn Russianness was something I had to mature into, something only a native speaker immersed in Russianness 24/7 could understand. Although I can read Russian, I’m wondering if there had been a way to get me interested in Russian on my own terms, if I’d be a faster reader today. As it is, I’m currently in the middle of this book, Thirst by Andrei Gelasimov (also available as a Kindle in English translation), and am really appreciating the writing style.

American culture was seen as inferior in our household, so I blocked it out, until I met Mr. B in college, which was amazing, because Mr. B was like an inverted mirror image of me. He grew up internalizing all the same values, but none of the flotsam of Russian culture. Instead of focusing on traditions,  he was brought up focusing on critical thinking and self-learning.

As a result, he knew more about the American legal system, politics, and the Constitution than I had ever learned, he taught me to love the Rolling Stones, who I’d never heard of before in my life. He taught me the concept of American independence. But he knew very little about the richness of his own background.  I taught him Morozko, how to be Jewish, and pessimism.

Together, we taught each other how to be Russians our own age. We became friends with Russian-speaking couples our age, and we discovered Russian culture on our own terms. One of the recent phenomenon of Russian culture that we love is the show Svetofor, Traffic Light, which is amazingly available online (without subtitles, unfortunately), for free. 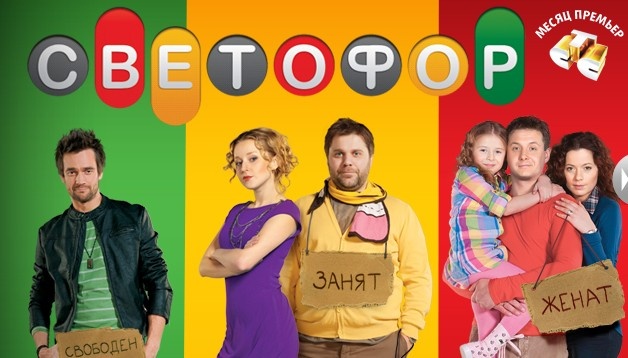 It’s an adaptation of the original Israeli show, Ramzor, of the same name. The basic concept is that there are three guys, a single bachelor, for whom the light is “green,” , Edik, one who’s in a committed relationship, for whom the light is yellow,Pasha,  and a married guy with a kid, whose light is red, Seva. They’re all best friends and the sitcom revolves into the scenarios they get into together, many of which involve deceiving their significant others.

The show was a huge hit in Israel and Fox tried to adapt a version for the U.S. market, which was an abysmal failure because Americans don’t like to portray normal relationships on TV.   The Russian version is relatively successful, and we love it. Watching Svetofor is the same as watching any American sitcom like friends or Modern Family: it embodies modern Russian values but in a way that you know most Russians don’t live this way.  It gives us an understanding of how people our age think of things; it gives us a frame of reference in a way that 20 years of living in 1975 didn’t do.  It breaks us out of our own amber.

So when I read about  Lykovs again, I was thinking about all the ways it applies to my life, and I think that’s why the story went so viral.  The big appeal of the family is not only that they all survived for so long, relying only on themselves, to stand up for what they thought God demanded, but that they were separate from humanity in a way that we like to boast we can never be.

No man is an island, said John Donne, but I think that’s not true. I think we are all part of society but are all really alone because we have beliefs and knowledge that are an intrinsic part of how we operate, that have been passed down to us by parents or whispered by friends or gifted by life experience, that only we can explain to ourselves, and that it makes us lonely and just as separate from society as the Lykovs.

Some people are eternally this way. They understand the world completely differently and are tortured by this fact. These people end up writing great works of literature or making movies and then dying before their time. But most of us feel this feeling at least once in a little bit, the feeling of going away from the well-tread path of humanity and striking out alone, possibly in the wrong direction.  In these minutes or hours of solitude, we are most like the Lykovs as our minds journey through these dark and mysterious places where only our own footsteps echo.

But then we remember ourselves, and we shake the feeling, and we are back in the warm fold of humanity, where we find out that Kanye is having a baby with Kim Kardashian, and did you know there are already mashup pics on Tumblr of what people think this baby will look like?