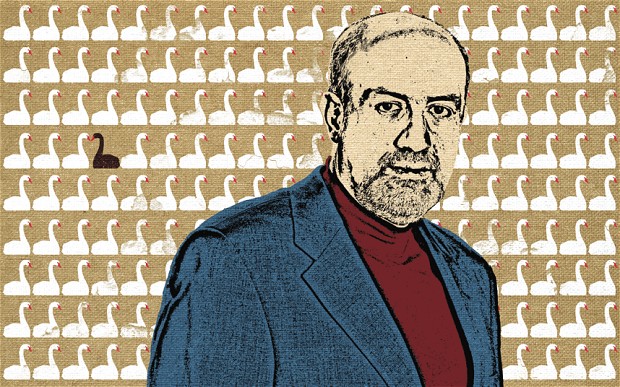 Still my favorite philosopher/economist/misanthrope. Still agree with him on nearly everything.

Antifragile resembles a self-help book, though it is difficult to imagine any other self-help book as intemperate and cranky. The author is a tireless self-aggrandiser, boasting of his gargantuan reading habits; of being a weightlifter, ready to physically slap down detractors; and a gourmand, recommending fine wines and camomile tea to ease a troubled mind.

Here are some excerpts from press about him+ Antifragile:

He also comes across as a helluva personality: irascible, finicky, vain, prone to fits of pique at those who mischaracterize his ideas (uh-oh, better watch out), disdainful of journalists (double uh-oh), a weightlifter, too (this is your third and final warning).

On the other hand, he has habits I admire: He told the New Scientist he only goes to doctors if he’s really sick, he takes a dose of local water (a drop, no more) when visiting India (good for the immune system) and apparently he’s never been in debt

You’re critical of various groups who claim to be able to predict and manage the future – which, in your opinion, has done the most damage? The most damaging group are economists; probably the most damaging individual is [former chairman of the US Federal Reserve] Alan Greenspan, and maybe also [current Fed chairman] Ben Bernanke and [US treasury secretary] Timothy Geithner. The reason I’m against the top-down state isn’t so much theoretical, but because of what I call having skin in the game – bureaucrats have no personal stake in their decisions. I don’t tell you what I predict; I tell you what’s in my portfolio. So economics-wise, I don’t want people to tell me what to do; I want to know what they’re doing.

“Exactly!” says Taleb. Once you get over the idea that you’re reading some sort of popular economics book and realise that it’s basically Nassim Taleb’s Rules for Life, it’s actually rather enjoyable. Highly eccentric, it’s true, but very readable and something like a chivalric code d’honneur for the 21st century. Modern life is akin to a chronic stress injury, he says. And the way to combat it is to embrace randomness in all its forms: live true to your principles, don’t sell your soul and watch out for the carbohydrates