How the other half eats 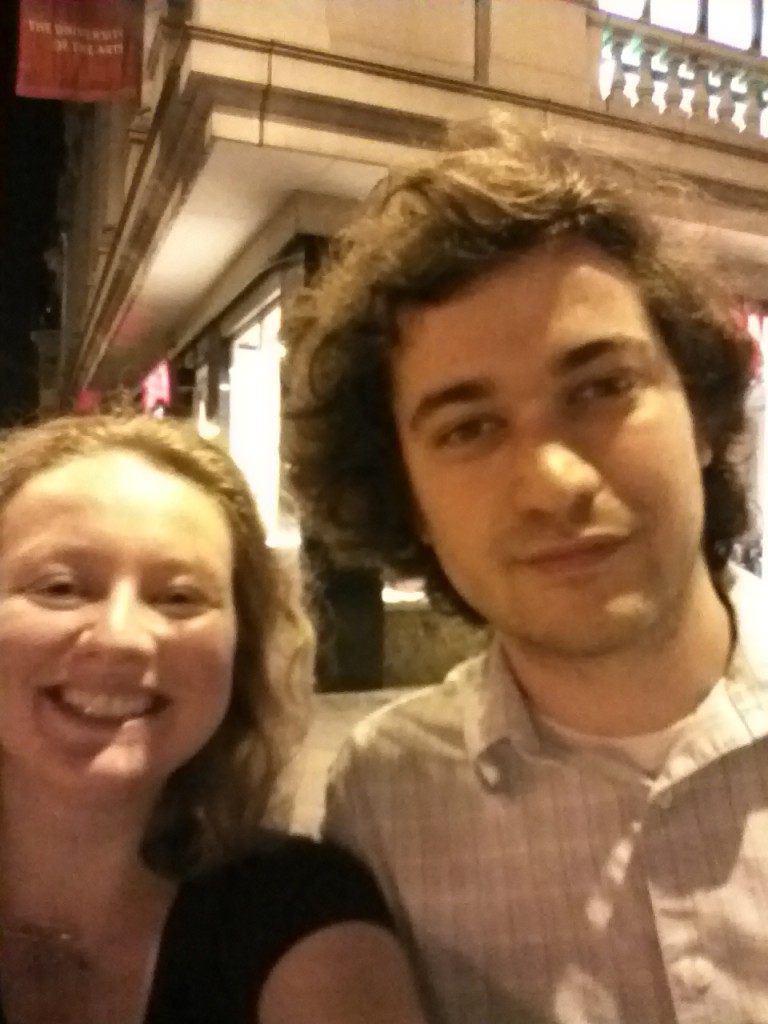 Mr. B and I have this tradition where we go to super-nice restaurants for our anniversary because we like to pretend we’re classy.

Last year, we had an amazing dinner at Zahav before we learned that Steve Jobs died, bringing our evening to a predictably Russian close of moroseness and regret.

This year, we decided to go to Vetri, which is a super-cute place  billed as “possibly the best Italian restaurant on the East Coast.” Whoever wrote that tagline should put an asterisk in there. *for normal people.

Because, as you know, my neuroticism is why we can’t have nice things.

I’d been battling a sinus infection all week, and my Eustachian tubes were miserable, meaning I could only hear as if I were swimming through soup. I’d even been to the doctor already and she told me there was nothing I could do in the short term but wait the sinus infection out. In the long term, she could give me nose steroids.

However, I’d been looking forward to this meal for over a week and NOTHING WAS GOING TO STOP ME. Not a cold, not the suggestion that I take roids to clear up my sinuses, not an earthquake.  Also, if you cancel less than 48 hours in advance, you have to pay the restaurant $155. So, nothing was going to stop me.

“What if I can’t taste the food,” I asked Mr. B, concerned. “Will they give me a discount?”

I started the night determining to really seize it, despite the fact that I could only marginally hear and smell anything going on around me.  We made our way over to Vetri. I had brought other, more restaurant-appropriate shoes. “Hold it,” I said to Mr. B, and took off my shoes in the middle of the sidewalk, pulling the heels out of my $20, scuffed TJ Maxx-purchased purse.

The evening was off to a classy start.

Once we entered the restaurant, we realized that Vetri does not mess around.  All of the staff were in formal suits and neutral-toned cocktail dresses. Mr. B and I were in Israeli formal. Not that we were wearing jeans, but let’s say that if you sent us to a wedding in Bat Yam, we would not be out of place. (I would love to celebrate my anniversary at a wedding in Bat Yam next time. )

“Would you like a seat,” the hostess’s voiced echoed through my fog. We sat.

The waitress came. She looked like Zooey Deschanel. It probably was her.

She explained that there was a tasting menu, and that if there was anything specific we wanted, we should ask the chef, but otherwise he preferred we stick to the plan.

The plan: (yes, that’s a piece of chocolate on it that I put there.) 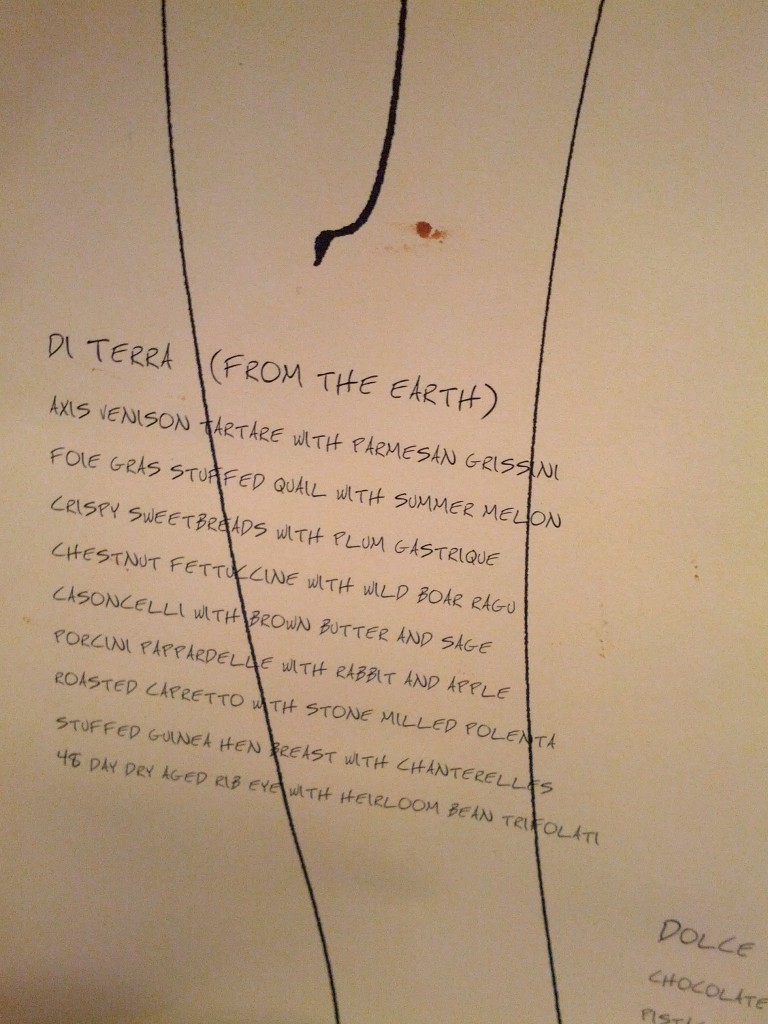 A couple years ago, we watched this Israeli movie about the Lebanese war of ’82 where some Israeli soldiers coped with the stress by pretending they were really a photographer and removing themselves from the action.  It seemed the same was happening to Mr. B.

Already feeling out of place because everyone else was in evening jackets and probably Dolce, we observed as a group of well-heeled lawyers or businessmen sat down at a table next to ours. Dressed to the nines, they called the waitress over with an ease I could never muster up and started ordering liquor.  I strained to hear them through my soup.

“Ne podslushivai. Don’t eavesdrop,” Mr. B said, even though I wasn’t visibly doing anything. He had come to understand my movements over the years.

“What if they say something interesting I can write into my novel,” I asked him. “We’re never around people this powerful very often. It’s like being in a John Grisham novel.”

“But they just said they knew Allen Greenspan,” I protested.

“Didn’t you hear them talking about how he had a BMW?”

“I thought you couldn’t hear anything because of your Eustachian tube? But somehow you can perfectly overhear the people at the next table?”

“They were talking about Allen Greenspan!”

“And here I was, thinking we could talk about our future, our dreams, our goals, celebrate our love…”

“But you just need to also be able to hear what that dude lawyer table is talking about?”

The meal began with a flourish. We were brought prosecco and a plate of pre-meal stuff. All pics are from Yelp, because that’s the one déclassé thing we had the foresight not to do. 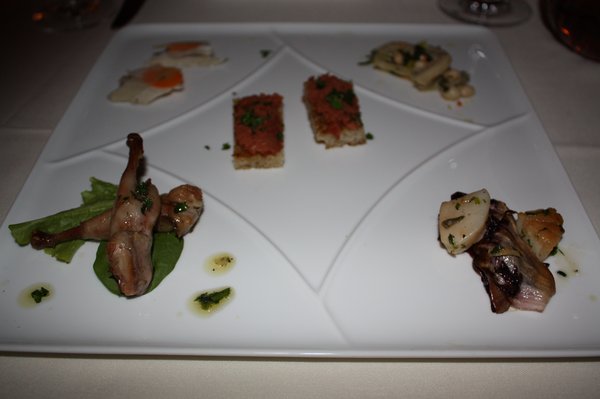 “To us,” Mr. B raised a glass. To us in Russian is nam (nAHm), which is impossible to pronounce if you have less than two functional nostrils.

” Ughhhghghnn,” I replied, and we clinked romantically.

We tried the stuff on the plate. It tasted exactly like kelbasa you would buy at the Russian store for $2 a pound.

We tried more stuff.  “Exactly like doktorskaya,” Mr. B said.

“I’ve figured it out,” he said after several minutes of contemplative chewing. “American fancy restaurants are expensive because Americans have never eaten unprocessed food like we have, hence it’s a delicacy. But to me, it just tastes like childhood.”

“Next time we have friends over, I’m just going to cut two slices of kelbasa, put them on a tiny plate, and charge them $300 and call it an experience,” he said.

“If they complain, you can give them a sliver of cheese, I suggested.”

“Dob’t but your elbows od de table,” I said.

“The baller lawyers are doing it,” Mr. B said, pointing to the Greenspan table near us, which had already moved on to wine and was starting to get conveniently louder.

“That doesn’t mean you should. That’s not what they taught us in our business dinner class.”

Mr. B put his elbows on the table again. “Stop that,” I said. “You’re not being classy.”

I then reached over to get another mouthful of the amuse-bouche/Russian store surprise, and promptly dropped it from my fork into my water glass. It lay floating in the glass of water like a greasy liferaft. I looked at it mortified.

I looked around.  No one had seen.  I quickly picked it out with my fingers and put it straight into my mouth.

Mr. B looked at me for a second, then we both burst out laughing.  It was a perfect encapsulation of our marriage.

The rest of the night progressed much in the same manner.

Along the way, we were served some really delicious things. 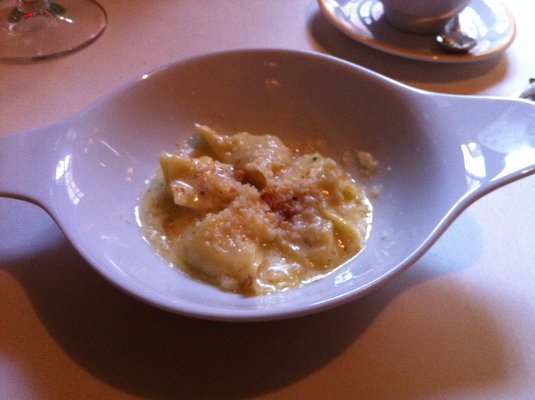 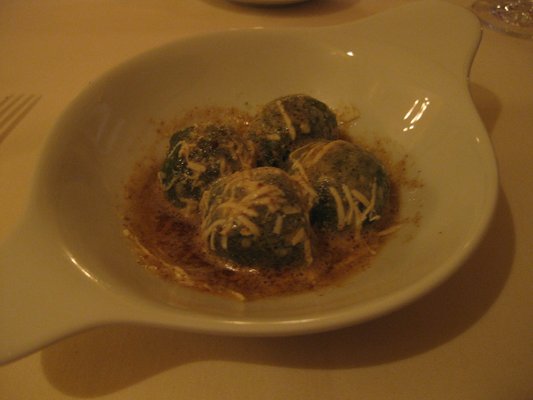 Things that had truffles in them and things with carmelized onions and rabbit and pasta stuffed with stuff. The dishes kept coming, one for Mr. B, one for me, and both different.  At one point, a whole fish, packed in salt, was brought out on a baking sheet to us for show, then taken back into the kitchen, drizzled with olive oil and butter, and served with burned brussel sprouts. My favorite dish was the boar pasta with chestnuts and sprinkled with chocolate powder.

I have no idea what most of them were, but they were good. I’m not sure if it was the classy wine talking, the pricetag, the fact that I had only eaten 400 calories so far that day to prepare for the gorging, or the fact that I had made it through the day alive to celebrate my anniversary with a man who never fails to make me laugh, but I was stuffed and finally starting to be happy, even if I was terrified that we were going to be thrown out of the restaurant for fine dining while déclassé.

After eight courses, a dessert with two tiny candles was brought out to us. We blew them out. I blew my nose.   “Happy Anniversary,” he said in English, honoring his vows to stick by me in sickness and in mucus. I became sappy.

“Man, we got KILLED on that fucking deal,” the lawyers said romantically from across the aisle, making their way through some oysters.