My first and last massage 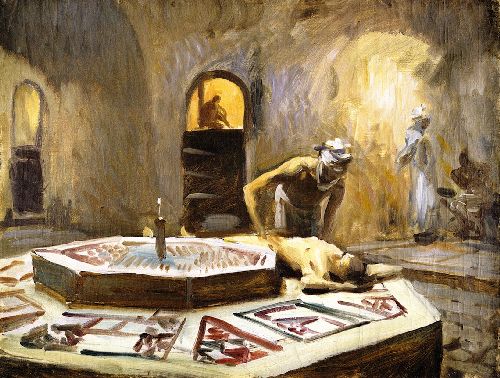 For my birthday this year, Mr. B gave me a gift certificate to a massage at a Fancy Spa because he knew that I’d been stressed out. He knew this because he’s been married to me for almost four years now and there is not really a time when I’m not stressed.

I was really excited, because a massage is one of those things that you would never buy for yourself, but that you will gladly enjoy if someone else does. I am starting classes today, so I really needed a massage. But, I have a spotty history with both relaxing and the service industry.  Also, during lunch last week when I told my friend I was getting a massage, he said, “Oh.  I had one a couple of weeks ago. It was kind of weird. They tell you to take off your clothes. It felt a little like amateur porn, to be honest.”   Opposing feelings battled inside of me for the better half of two weeks before I finally sucked it up and made an appointment for this Saturday.

As you can probably surmise if you’ve been reading this blog for any amount of time, the experience made me extremely anxious.  As soon as I walked into the Fancy Spa, I felt like I didn’t belong there. The reception area had fancy, fancy skinny chairs wearing fancy upholstery and fancy skinny women wearing Fendi.

Who are these one-percenters that gets massages? In Russia, it’s people who have a medicinal need for one. In America, it’s  trophy wives and bourgeouisie.  I am neither, so I was immediately uncomfortable.  What do I do?  How do I act around classy people?  My heart started warming up for the main event by beating a little faster. That bastard.

“Hello there,” the receptionist said.  “What size slipper are you?” Slipper?  What did that mean? I had to change shoes? Did I have to tell her my actual size, or small, medium, or large?  If I messed up, she’d know I never had a massage before. Act natural. Act natural. “Uh…medium?”  She gave me the medium slippers and I patted myself on the back for making the right choice.  “Go into the changing room.  You’ll find the robes there.  Then, walk out down the hall to lounge and wait there. Your masseuse will greet you.”

I went into the locker room.  Smooth jazz was already wafting in through unseen speakers. The area was dimly lit, and there was a jar full of cool minty water for the blue bloods to enjoy. I looked at the robes and panicked. Was I supposed to take it ALL off?  Just my bra?  Just my t-dress? If I took too much off, would the maseuse think I was creepy? I struggled with this existential dilemma for ten minutes before I was worried that I was keeping the maseuse waiting and took off everything except my underwear and put the robe on.  Could anyone see through the robe?  Was I a walking creep? I spent another ten minutes cross-examining myself in the mirror to make sure no one could see through the robe before I walked out into the hallway.

The small hallway was also dimly-lit and there was, in addition to the smooth jazz, strains of something that sounded like a fountain.  Rooms with names like “RELAXATION”, “PEACE” and “ABUNDANCE” dotted the sides.  I wound my way through the maze.  There was no one around, and I felt a little like I was either in Alice in Wonderland or a sitcom.  The lounge was a smallish room filled with plush couches, a skylight that had no visible sky, only stars painted-on, and a table behind which was a wall with a window painted on a beach.  It was everything you needed to relax.  I was nervous as hell by this point.

The maseuse came in.  She was very tall and attractive and skinny like the furniture in the lobby, and she had very shapely eyebrows. I have terrible, lumpy eyebrows. “Vicki?” she said. “Yes,” I said feeling like a shmuck. “I’m Dasha, I’m going to be doing your massage.” Shit, I thought.

Dasha wasn’t her actual name, but it was close enough that, combined with her accent, I could already tell she was Russian. This ruined everything. Because here’s what would have to happen.  I’d have to decide either to reveal to her or not that I was Russian, we’d have to start holding a conversation, and things would get awkward right away.

As she led me down the hallway, I was already debating in my head whether to bring up the fact that I was Russian or not.  “Have you ever had a massage?” she asked. “No,” I said, preoccupied with how much of a social leper I was.  “You’re going to love it,” she smiled. I wilted inside.

My first-world problems are THIS big.

She led me into a small room that was even more dimly-lit and had Enya on in the background.  “Take off your bra,” she said, “and lie down under the covers, on your stomach.” My anxiety factor increased by ten, but I did so.  Then she came in, and started massaging my back and my sides. As my face was lying in that special face-hole that massage tables have, I wasn’t feeling the massage but was instead debating whether I should say something.  After about ten minutes, I decided I had to break the boundary of knowledge.

“If you don’t mind me asking,” I said in English, “where are you from?”

“Sure. I’m from Russia,” she said while she continued to massage me.

She startled and said the name of a town.  Then it was quiet for five more minutes.

Then we started the usual chat. Oh, where are you from? When did you come here? How long have you been here,that whole spiel.  Normally this conversation is fine, but it’s not when one of you is being massaged by the other one

During our conversation, over Enya, I learned that she’d been here five years, lived alone, her whole family and her boyfriend was back in Russia, she was hoping to back next year, but in the meantime she was working three jobs so she could make money.  Was she hustling me? I couldn’t tell. What I could tell was that she was working, and here I was, lying on my stomach, listening to all these stories.

I hate these stories because I always feel guilty.  Guilty that my parents immigrated when I was little and I never had to do any of the hard work, guilty that somehow I’m American, guilty that I was getting a massage, which was something I totally didn’t need. Never mind that at age eleven, I sat down to do homework and didn’t get up until age twenty-one, when I graduated from college early. I worked hard in school, worked hard in college, started working hard in the real world, and, now, my MBA.  But it’s white-collar work, and my parents paid for college, so it doesn’t count.  Around Russians who immigrated later, I always feel like I haven’t done anything significantly hard in my life, and it makes me feel terrible.

I also felt fat.  Because nothing makes you lose your self-esteem like being touched all over EVERY area on your body you think is fat (which is all of it) by someone with perfect eyebrows.

This conversation continued for the duration of the massage, and I felt worse and worse with every minute. What made it worse is that I found out she was the same age as me.  I wonder what she thinks about me, my scumbag brain thought.  She probably thinks I’m a lazy American. With terrible eyebrows.

Finally, after an hour, the torture was over.

Dehydrated and completely exhausted, I went back to put my clothes on.  There were a couple of American women in the dressing room, clowning around putting on the robes, and laughing to each other about how much they needed this, and asking each other where the water was.

As I panicked about whether I was already supposed to have left a tip, or whether I had to do it on my way out, and how much you tip for a massage, I wondered why I couldn’t be like them, like women who know they need to be pampered and completely enjoy the experience that poor Mr. B had rightly thought I would enjoy.

The answer to that question, is, of course, because I am me, and that answer is the sole reason I continue to have enough material to blog about.

I ran from the spa and drove away as fast as I could, my new favorite song blasting from my stereo.  The feeling of complete relaxation I got just then made the massage worth it. That, and the material I got for this post.