Like every Internet-literate female American homeowner under the age of 45, I read Young House Love.  This blog is made by two very cheerful married  people who do almost all of their home repairs together as a couple. Surprisingly, they have not murdered each other with an Allen wrench.   Although the husband’s parents chip in from time to time to take care of their young daughter while they paint and have helped them build a deck, their main message is that if you have just two people, you can accomplish anything together.

Ever since we moved into our house, I’ve been trying to follow that idea.  Ironically, although we moved to Philadelphia to be closer to family, we see less of them than we did when we were living in DC. Combined with the fact that we’re both from post-Soviet families built on the premise of only children to save money and space in one-room apartments, we’ve been trying to do it all by ourselves together because we also really hate bothering and inconveniencing people.  Working, studying, cooking, cleaning, interior designing, writing, editing, lawncare, life.

Accomplishing  common goals with Mr. B is one of my biggest joys in life.  For example, here’s a picture of Mr. B being sentenced to two days of taping and painting while I take pictures. 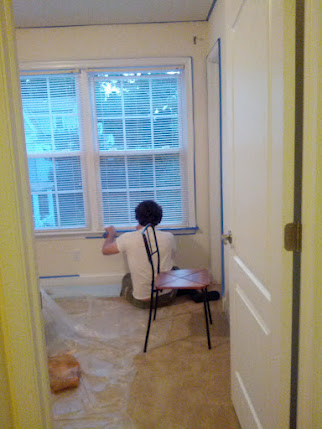 But no man, or family of a man and a woman who needs to change everything in her house, is an island, or should be.  Young House Love is cute, but they don’t talk enough about how important it is to have family helping you all the time. Because they’re American, and they value freedom and independence. Which is what I’ve been trying to do for the past year is not asking for help, but it has been slowly destroying me.  Families are meant to be together and do things together.  Even though we’ve been doing it all ourselves, we’ve been going insane from overwork and isolation.

So I axed the fancy museum plans for this weekend, got over my American feeling that if you’re asking for help, you’re inconveniencing other people or being a burden, and and asked my parents to come help us around the house as my birthday present. Our yard was a mess.  There was a lamp that I wanted to hang that Mr. B and I didn’t know how to do. Our fridge was disgusting. Our screen door was broken. We had a boob light infestation.  You know the ones I’m talking about: 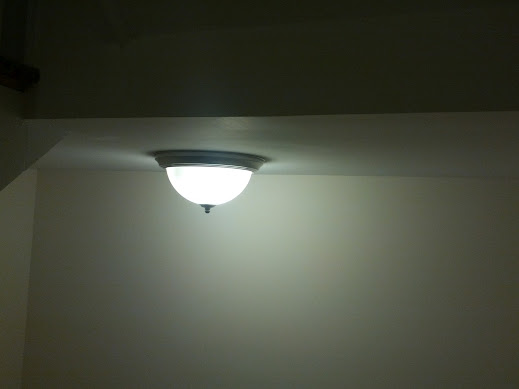 And then there were the Trees.

The trees are this thing that Mr. B loathes with a passion. Unfortunately they are my favorite thing in life.  We’d painted our bedroom green last year and sometime this year I decided it would be a good idea to turn it into a Russian forest, because I love the idea of a Russian forest but I actually hate being outdoors.

So I ordered a bunch of birch trees (the national tree of Russia) decals from Etsy, thinking it would be an easy project I could do in an hour or so. Don’t they look hipster-charming in the picture?   They turned out to be too tall and required too much effort, so for three months, they were sitting on the floor in the attic, mournfully waiting to be used.

I used to think that people who said the best gift was time were lame or cheap.  Because who would really prefer a popsicle stick piece of art that took three hours to make as opposed to, say, a Louis Vuitton purse (by the way, this exists.) that took two seconds to order online.

But this weekend proved me completely wrong.

As soon as my parents came, not even stopping for a drink or a bathroom break after their two-hour drive, they got to work.  My dad put up the lamp to replace the ugly one we had as Mr. B finally had time to take care of the lawn. 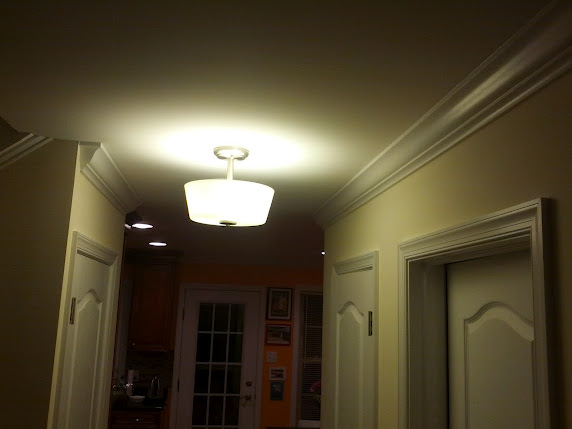 My mom made us soup, cleaned our refrigerator, and right after that, she helped me put up the trees. 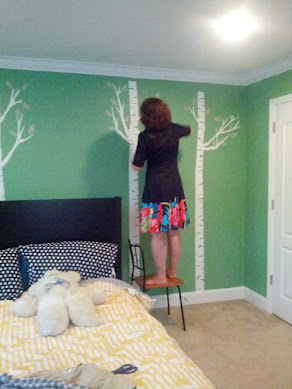 They are better than any present I could have gotten because my mom helped me put them up. 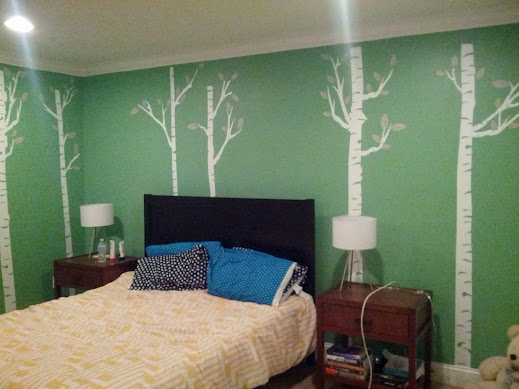 Here’s the room when we started, last  year. 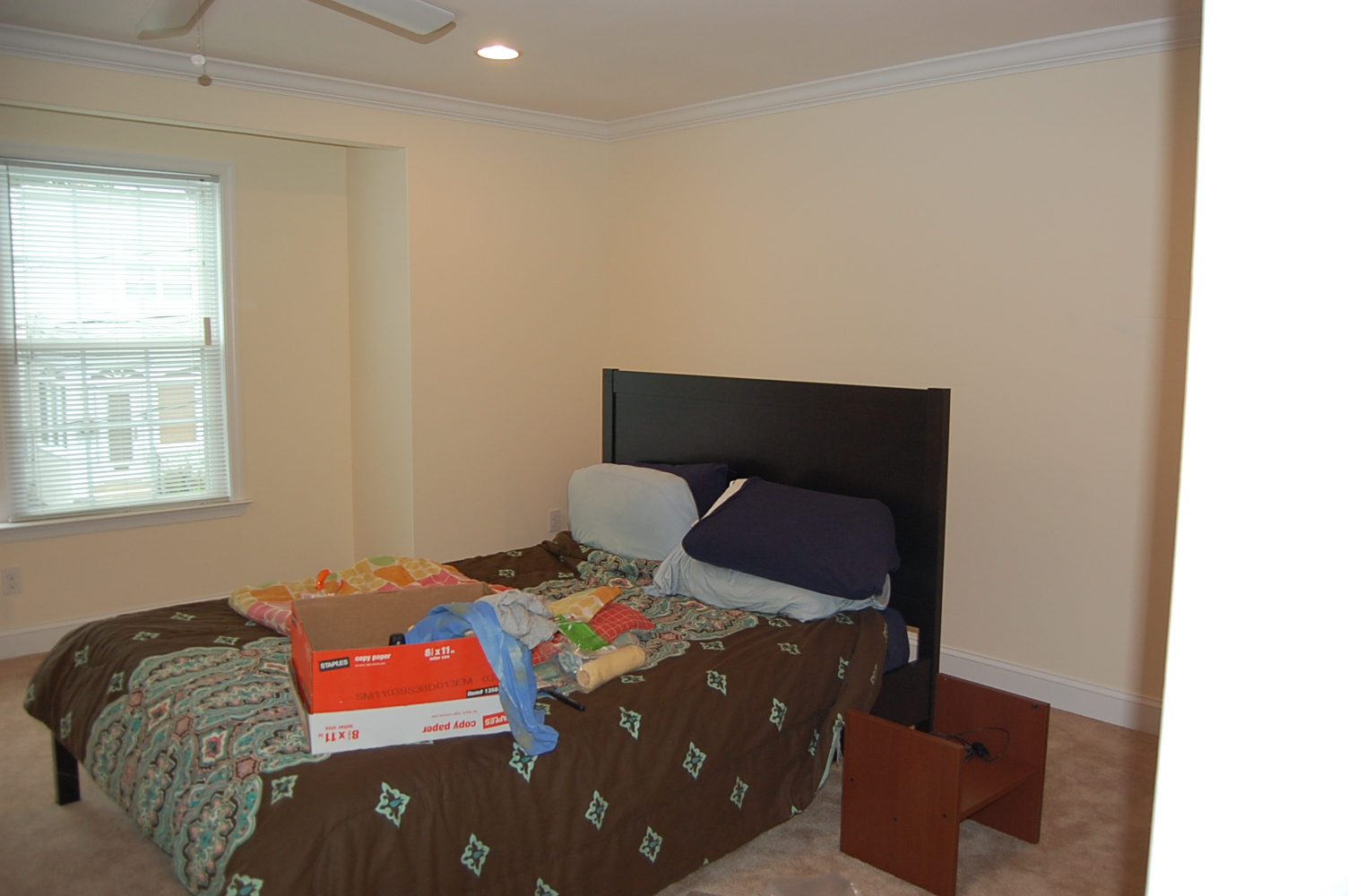 We also have amazing and thoughtful friends, who came after we were done with all this stuff to give me hours of their time for my birthday, and we sat late into the night, laughing, and drinking, and singing along to the guitar. 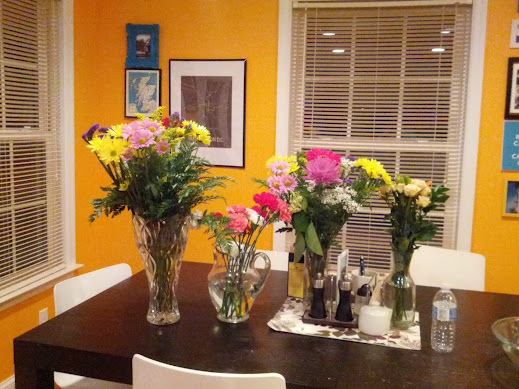 It was a great birthday, and I’m finally learning how to be a functional human being, just in time for my mid-20s.