I don’t read my Economists

Yesterday, I was reading The Economist.

We get The Economist once a week and I put it on our coffee table to make it look like we know what we’re talking about (“Did you know Indonesia is at a crossroads? It is!”)

I fan it out for extra effect when people are coming over. If I’m feeling especially snooty, I’ll throw a couple Monocles on top. (“Did you know the Boykises are unapproachably pretentious? They are!”) 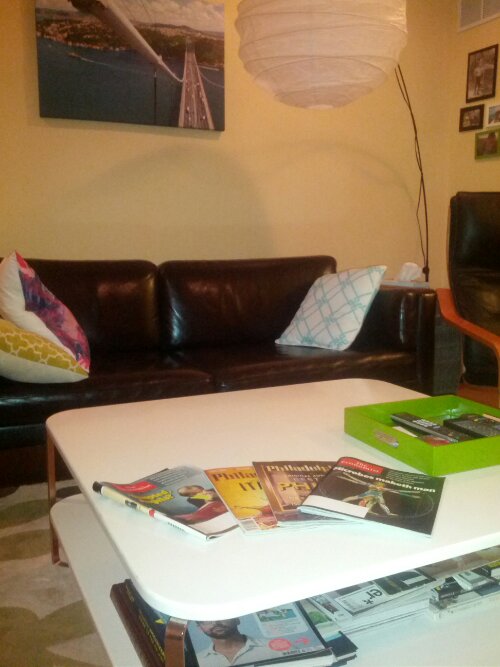 My dirty secret is that I have read approximately 0.1% of the contents of these Economists for the past month or so because of the sheer girth of those suckers.  I don’t think anyone has read an Economist cover-to-cover since before the internet was invented and there was nothing else to do except play solitaire and wait for Web 2.0.

In high school, I would spend hours at my local Barnes and Noble, drinking frappuccinos and reading The Economist by holding up the cover so that passers-by would realize how genius and smart and worldly I was. I felt misunderstood as a teenager in Middle America and it was only later when I found out about Tumblr did I realize there was a whole country full of miserable insufferable entitled teenagers exactly like me.

Anyway lately, my Economists and my italics have been piling up.  When my parents come, I gift them generously and Jewishly to my mom.  Otherwise, they go to recycling. So I’ve been feeling a little guilty that I’m paying a lot money for what is essentially the literary equivalent of a straight-to-DVD movie, and yesterday at dinner, I was finally reading when I happened to find this: 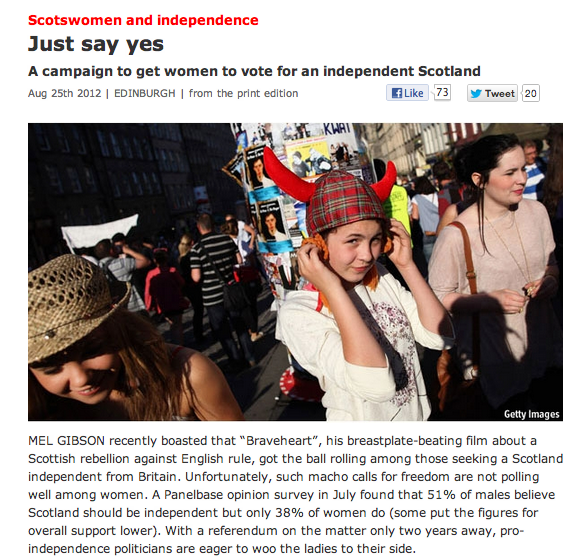 to which I say, I wish I never started reading The Economist again.

Because, WHAT?  What Scottish woman in her right mind doesn’t want independence? I thought I covered all this already. Independence, freedom, BPC, the whole deal. I mean, sure it might completely ruin Scotland financially, but wouldn’t YOU rather be free than have running water and a stable currency?  What’s that? Scotland is keeping the pound?

So what’s the holdup?   Why?  Why, Scottish women?

Female voters have never been too keen anyway on Alex Salmond, the brusque if charismatic leader of the ruling Scottish National Party (SNP) and first minister of the Scottish government. But they are not alone in being squeamish about much of the pro-independence rhetoric. Scottish voters tend to dislike terms that emphasise a fundamental split from Britain, preferring upbeat mentions of “exciting opportunities”. Nationalists have duly toned down their language, yet even their fuzzier “Yes Scotland” campaign has disproportionately failed to win women.

Are you kidding? What do you not love about a man who wears plaid pants and takes pictures in bars? By the way, check out that Geniune Scottish Dude drunk in the corner. 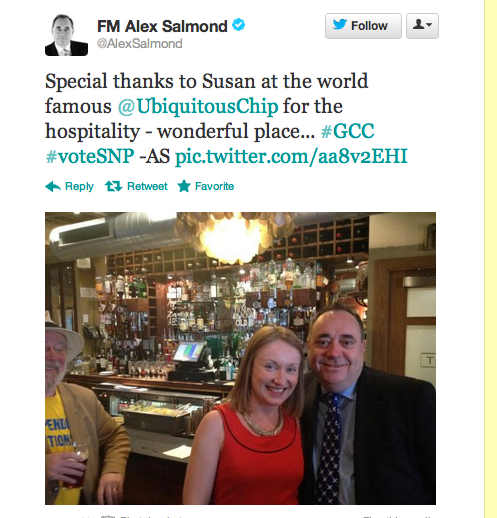 Alex Salmond is THE MAN.

Who are these women who don’t want independence? 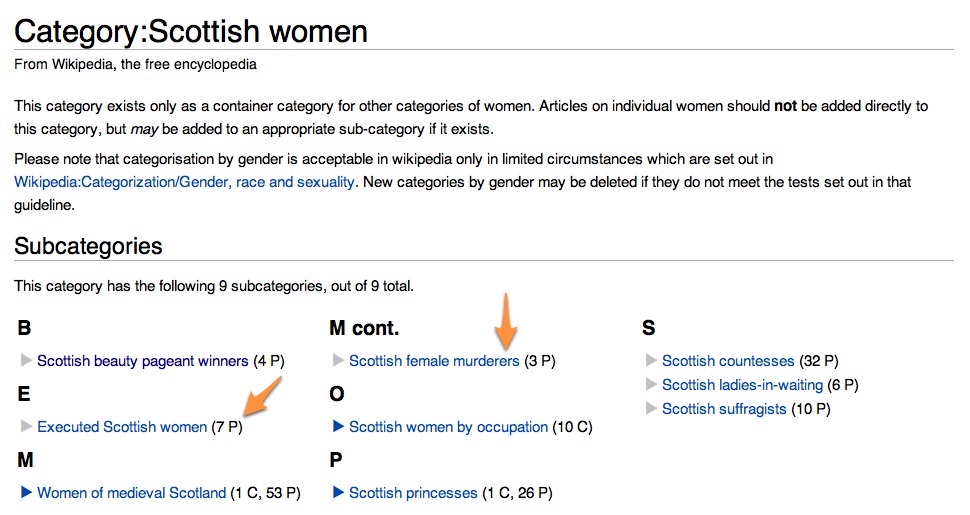 No wonder they’re not going to vote. Half of the women were killed by the other half.  When they weren’t busy being killed by Scottish men.  Don’t even get me started on Scottish history again.

Focus Vicki, focus.  You’re supposed to be in a different country, in 1936.

Anyway. Where was I?

Oh yes. The half an hour I spent researching this blog post and reading about grisly Scottish women deaths is the reason I don’t read The Economist anymore.