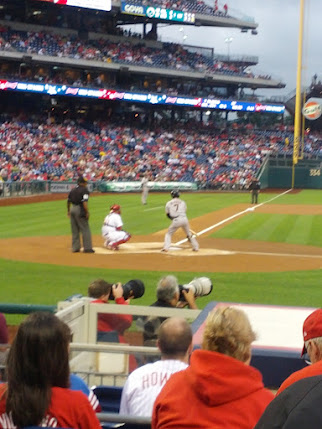 Thanks to the fact that I’ve worked my ass off this past year, Mr. B and I were able to enjoy a Phillies game for free at the ninth row last week. Don’t ask me who they played, because I have no idea what any of the teams are, I just understand how baseball works. 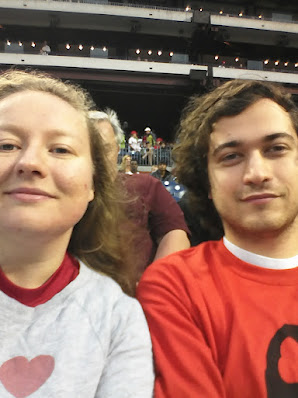 The closest Jews get to playing sports.

Things are really close in the ninth row. Like, you can see the pitches close enough to understand if they’re balls or strikes.  It was pretty awesome.  The weather wasn’t the best,but it was summer, and it was a baseball game, and life was good. In the ninth row, they have something called the Diamond Club, which is basically this institution that says the recesssion never happened.

In the Diamond Club, everyone is really nice to you and even brings food to your seat.  If you need anything, attendants are always standing right there.  So you can eat and drink as you watch these men trying to fight their way through hundreds of pitches.  It was a little like being at the Circus Maximus.  It was awesome. 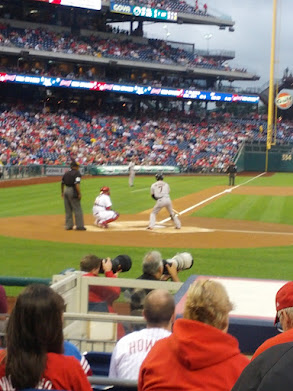 Unfortunately, dear reader, as you probably realize by now, I am not an individual who can enjoy things as they are meant to be enjoyed.

First, there’s something about baseball that’s highly philosophical, as I’ve written before. Baseball is one of those sports that’s distinctly American with a capital A, that gives you a unique flavor of what America really means. Hundreds of people have written about it more accurately than me. The last article probably describes it the best: the feeling of being a hard-working American, of summer, of glamour and big money.

When Perez is about to sneeze, he pulls a tissue from a Marlins-branded box. When he has a drink, he’s careful to use a St. Louis Cardinals coaster. He scrawls something on a Yankees notepad, rips off the piece of paper, and tosses it at a reporter. It reads, “Leugim Barroso.” That’s the name of a recent Cuban defector now in the Chicago Cubs’ minor-league system. “Another client,” he says with a shrug.

This is Carlos Perez’s big-league American dream. Only 14 years after escaping Cuba and ten years after applying for a $10-per-hour job with the town of Hialeah Gardens, he has carved out what appears to be a lucrative niche.

As Miami’s most visible representative for Cuban ballplayers, he regularly appears in the sports pages with talented young defectors such as slugging third baseman and outfielder Adonis García and highly touted pitcher Onelki García. He lives with his wife Liseth in a three-bedroom house near Sweetwater that he bought for $465,000 in 2005. He’s a Bentley-driving, freedom-loving exile Arliss, making a living in the muddy confluence of sports, global politics, and American law.

As I was thinking about baseball and the American dream, my thoughts also started to gravitate, as they tend to do nowadays, downward to Russia.

“Hey,” I said to Mr. B, who barely took his eyes off the pitcher (Mr. B’s dream career when he was growing up was to be a pitcher, but unfortunately that dream did not come true, and now he is resigned to brogramming.)

“What,” he said, half-listening.

“There are a lot of people here tonight.”

“Isn’t it a scary thought that these people are all expressing the same emotions?”

“What do you mean,” said Mr. B warily.  He could tell where this was going.

Mr. B, the world’s longest-suffering husband, rolled his eyes.

“No one’s going to start a revolution here.  Now be quiet and let me enjoy the game.”

I was quiet, but my mind wasn’t.  I was imagining a scenario like that one song in Stilyagi:

The crowd effect is really scary. It’s something I’ve been thinking about a lot lately while writing my book. And walking to work. And eating yogurt. And, at baseball games in July.  If you’re caught up in the crowd effect, how do you know? What if we’re all caught up in it now?   And how do you make it stop? What if you stand to lose everything?  What turns a stadium from a peacetime pace to watch games into chaos?

Mr. B ate his popcorn, oblivious to the dark forces gathering in my mind.

That’s the thing though about writers and Russians. It only takes us a minute in our mind to go from baseball to the Taliban blowing people’s brains out.

Or is that just me?