The recession is over

Put down your Economists and Forbes magazines. They’re lying to you.  I’m here to tell you that the recession is over. 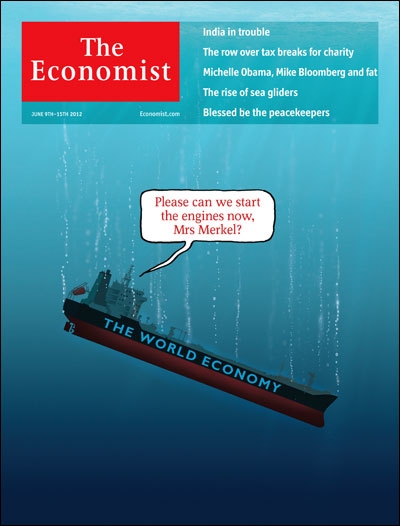 How do I know? The movie trailers for upcoming films in the next couple months are getting better and better.

Movies are a risky investment, kind of like a start-up, and the movie industry is brutal.  Each movie is a separate company:

Studios have no problems finding finances, if we’re talking about the major studios. With the studio movie, such as “Wall Street 2,” which is coming out, it goes into production in September and it comes out in the theaters April 23 — so it’s only six months that the money is at risk. If you are making an independent movie, it may be years before the movie gets released, so you have to borrow the money for a very long period of time. And no one wants to lend you this money, except at high rates of interest.

Movie studios, one of their great arts is basically taking the risky movies and using other people’s money, and taking movies that are less risky and using their own money. The movies that are most risky, dramas and comedies — because with comedies, you don’t know if you’re going to get foreign rights and how they’re going to play abroad — they try to sell them to hedge funds or to equity investors or to production companies that want to get in the game.

If you’re with a big-time company, you could invest millions into a crappy movie, only to see it flop, which is fine, but how many of these risks do you want to take?  So if the economy is bad, you stick with safe bets like remakes, sequels, and terrible god-awful movies based off video games and..board games. Here are some of the movies of the past couple years; See if you can notice a trend:

The trend is that they’re all reliable. We already know the first one did well, so we make more and more and more. In the case of Adam Sandler, he always turns enough of a profit to turn out crap movies.  In the case of action movies like Cowboys and Aliens, there’s a chance they could flop, but they’re so mindless and stupid that you’re guaranteed at least a baseline audience. Or, we know the director, as was the case with Stephen Spielberg in War Horse, and we know people will pay for him.

If you are a risk-taker, you go for movies you know won’t cater to the lowest-common denominator AND you use big-name actors, who you have to pay for.  This means you have to seek out capital that isn’t frozen-up with scared investors.   Movies take years to make.  So right now, we’re seeing movies come out where the capital was set up a couple years ago.  This means we turned the corner sometime in 2010-2011. And now, finally, we’re out of recession.

And out of the shitty movie cycle and into beautiful, thought-provoking, lovingly-made films.

Because here’s what we have coming up:

Brave, the Pixar version of my best-selling book about Scotland. Just kidding.  But really, who would go to see a movie about some Scottish girl, even if it’s by Pixar?  They’re taking a risk with this one in assuming I’ll go 10,000 times.

The Great Gatsby. “We know Americans don’t and can’t read, but we’re still going to try to recreate this great American novel in theaters and take a huge risk on it. To lessen the risk, we’ll make it in 3D. Americans love that.”

Les Miserables. Musical about the French Revolution…and Wolverine has to sing? AND it’s operatic?   HUUUUUGE risk. (Even though it is my favorite musical of all-time)

The Hobbit. Only LOTR fanboys care about this one. Again, a risk, especially given how much it was held up in production.

And..Anna Karenina.  If Americans don’t want to read American books, how the hell are they going to watch this? Oh yeah, Keira Knightley.

See you at the movies.