Heat hallucinations. And then, a Scottish miracle.

Yesterday, I ran a 5k, the same one I ran last year. 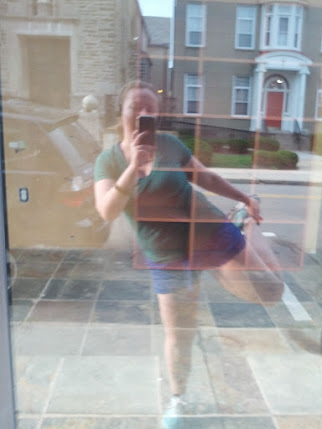 Except this year I am weak and fatty because  all my various non-Olympic activities like writing books, my MBA program, going to the West Coast, and laughing at the Russian publishing industry have eaten into my running time.

So, as can be expected, I almost died.  Mr. B was right. I would never make it.

The first mile wasn’t so bad, and I actually kept a pretty good pace with the rest of the crowd.  It was also mildly downhill, so my spirits were high. It also helped that I paced myself really well with the playlist I picked out.  It is really hard to put together a good playlist because it has to be ranked in order of increasing BPM and also has to be motivational.

I started out with this one, the Russian version of Ai Si Eu Te Pego to pace myself:

Then, Country Roads.  Man, I was killing it, even without preparation.  Doing great!

Then, at .92 miles, we hit the first hill and something strange started happening to my legs—they were forced to work. Good God, it was the most painful experience ever, because my legs are weak and not muscly anymore, so I gasped up the first hill. I felt like I would never make it to the top.  I started mentally making a list of who my possessions would go to.

And then, at the top of the hill,  I had to walk. Because I finally started feeling the 86 billion degrees it was outside, plus the hill, plus life beat me down. I’ve never had to walk any part of a 5k before. Defeat. She is ugly.  I turned down the volume all the way on my carefully-curated (God, I hate that word) music, because someone who’s not running doesn’t deserve the Cool Jams. I concentrated on trying to walk as fast as possible and gulped down air to regulate my breathing, but it was like trying to breathe in a fishbowl full of sand. There was no way I could cool down fast enough to run the second half.

But, I started jogging again when I passed the first volunteer station.  Because those people are always happy and start to cheer you on, and when you’re walking, you kind of feel like a moron. I jogged weakly past the first station, then I walked again.  I jogged, I walked.  My lungs expanded to full capacity and I still couldn’t pick up the pace enough to pace myself while running. The course became super-hilly, and I almost just gave up.  I was desolate.

By mile 2.7, I was concentrating on making it back to Mr. B alive.  I turned the corner up the last hill, and I could feel the finish line in the distance. I knew that, as much as I didn’t want to, I had to  I saw more volunteers and people watching on the sidewalk, so, I forced myself to start jogging again.

It really was the last of everything I had and I wasn’t even sure I could finish it out jogging, but I was going to give it my best effort.  I braced myself mentally. I quieted my mind. I turned the volume up on my music, because music is for winners.

Sometimes life is better than fiction, and I am not making this up at all when I say that  the song that came on was my remix of Loch Lomond.

And it pushed me through to the end. 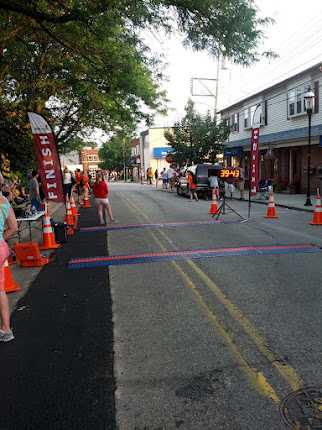 Mr. B came up to me after the race with a cold water bottle.

“Loch Lomond pushed me through to the end,” I said, then I told him the whole story. It was like I’d seen the Virgin Mary in a piece of toast.  It was a Sign from somewhere that I was meant to live through this race and make it out the other side. It was a Sign that there is a just and benevolent God. It was a sign that-

“Every other song on your playlist is Loch Lomond,” Mr. B said.

“That is NOT true,” I said vehemently, crazed and probably sunstroked. “Do you want to see my playlist?  I have only one Scottish song on there (THIS time, I muttered, sotto voce). ONE. So the chances of this song coming on were, like, one out of THIRTY.”

“THIRTY,” I repeated in a Scottish accent, then stumbled a bit, because I couldn’t feel my legs anymore.

“Right,” said Mr. B with sympathy and concern and gave me my water so I could de-heatstroke. “You only have one Scottish song ever.  Let’s go inside. I turned on the AC for you.” 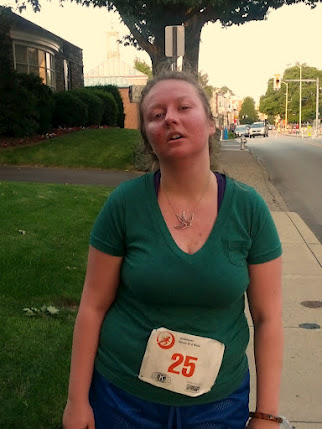