Mr. B and I are prepared for anything. Anything being either pogroms or the Siege of Leningrad.

I haven’t been blogging because every time I sit down to blog, my mind goes to my summer classes, work, or completely out the door.

Last weekend, it went to Seattle and Portland, where Mr. B and I spent a couple days on sanity leave (aka vacation.)  Much more on that later, but for now, here’s one of my favorite pics from the trip, from the ferries to Bainbridge Island. I think it pretty much sums up the Pacific Northwest. 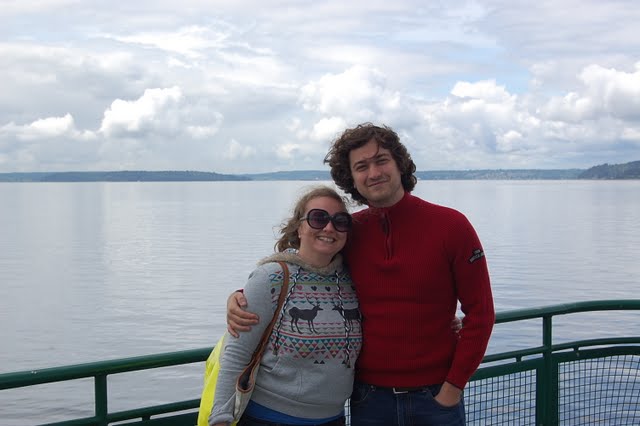 On vacation, I was devouring The Bronze Horseman, which is an excellent vacation read because it is a lighthearted romance set during the Siege of Leningrad.   By light-hearted, I mean that people were resorting to cannibalism.

Aside from that bit, it’s an emotional, heartbreaking and funny and beautiful book and I highly recommend it as a vacation read when you’re relaxing and don’t want to at all to think about why the author would mention that there aren’t any more rats in a city. I finished it two nights ago and haven’t been able to stop thinking about the story since. For example, I’ve been thinking about what I would do if I were in the Siege of Leningrad.

As a white person living in the first world with no discernible problems whatsoever, I often have these situations where I like to test myself by thinking about how good of a job I would do in a time of great mental duress that I have been extremely blessed never to have experienced.

Never mind that the actual times I was under mental duress, during the Israel-Lebanon War in 2006, I completely came unglued and decided that the faulty exhaust on the Number 7 bus stopping under our building in Tel Aviv was really Hezbollah.

A couple of months ago after reading Shalom Auslander’s essay, Mr. B and I discussed what we would do if a second Holocaust happened in America.  This discussion came about because I was saying that I’m a minimalist and Mr. B challenged me to list the five things we would leave home with and I couldn’t come up with only five, because I have way more than five books.

“What are you going to pack if the Nazis come,” Mr. B asked.

“Just a couple of things. Toothbrush, toothpaste, and lots of warm clothes.”

“WTF?  What good is cash going to be when you have to escape to, like, Alaska?”

“It’s not when no one values gold or cash where we’re going.  Warm clothes on the other hand…”

“So you’re going to leave the house with six layers on?  That’s going to hinder your mobility.  I’m leaving you behind to the Germans.”

“You’d leave me behind to die?”

Once Mr. B was done racially profiling me and deciding that I was better off as S.S. cannon fodder than safe and warm in Alaska, I began to trust him less.  Which is why I didn’t include him in my  siege of Leningrad fantasy survival scenario.

The main character in the Bronze Horseman, Tatiana, survives through her sheer internal fortitude and will to live for another main character, Alexander.  I decided would probably survive by being really strong and murdering people for their bread rations.

“You would murder people for food?” Mr. B asked loudly.  We were sitting at a busy coffee shop in Seattle overlooking Pike Place as we were having this discussion.

“Yes.  You don’t know what I’m capable of. My animal self is much closer to the exterior than it is for other people.”

“You would never, ever survive a siege.  You love food too much.”

“That’s true,” I paused to lick some of the whipped cream from the top of my iced coffee.  “But I could get really brutal if push came to shove.”

“Like how brutal,” Mr. B asked through his americano, unimpressed.

“Like Machiavellian-type situations. Like I’d wait outside the houses of the old and feeble for sweet relief to come and then come take their food.”

“You would never last a day in a siege,” he repeated. “You’d just get really hungry and complain all the time.”

“Oh, like you’d last in a siege.  You’re too kind and don’t have a mean bone in your body. You’d get taken advantage of all the time. Then eaten. By those like me.”

“That’s not true,” Mr. B said, hurt by this slander of his character. “I’d form mutual cooperation societies. Like they do in Hunger Games.  And we’d roam the streets.”

“How would you be doing this?  Shouldn’t you be at the front fighting the Synavino Offensive?”

“What, you think they allowed Jews at the front?”

“Um, yes? Also, a lot of my grandfather’s family served?”

“But you would be terrible at the front because, you know, you’re not angry enough. Probably best to try and stick you somewhere in intelligence.”

Mr. B and I fell silent and continued to drink our coffee, weighed down by the realization that, despite the fact that we’ve been told we’re Russian all our lives, if we were ever put in a country where you have to live on your wits as opposed to a system of established rules, we’d be done for.

(except for me. Because, remember, the animal closer to the surface and everything.)