Last week, me, Mr. B, his mom, and his aunt saw Footnote, the Israeli Oscar contender for last year:

It’s about a father and son who both study Talmudic literature.  The father is extraordinarily weird and intensely into his field, but without much success. The son is shallower but successful and well-acknowledged by popular society for his work.  The conflict that comes between them is the Israel Prize, the most prestigious in the country.  Jerusalem acts as a backdrop for the drama centered on small things. 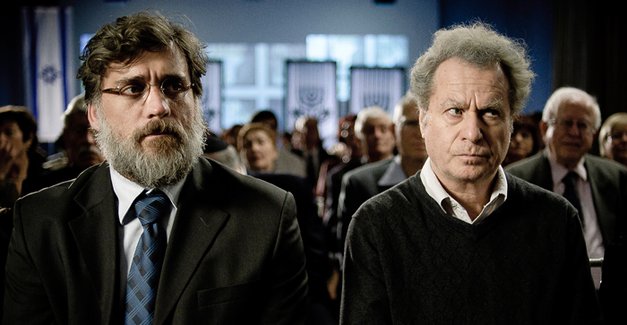 All the time I was watching the movie, I was embroiled in the emotional turmoil over what is essentially academic minutiae (quibbling over footnotes on Talmudic literature).  I was also practicing my Hebrew. I was so busy doing both of these things that I didn’t recognize the main actor.  He’s so good, I thought to myself.  Who is the guy that plays the son?

It turned out to be none other than my first Israeli actor love interest, Lior Ashkenazi.  I just barely recognized him because the last movie I saw starring him was Late Marriage. When it came out, 11 years ago.

As soon as it clicked in my head, I remembered seeing Late Marriage with my mom at Midtown Cinema in Harrisburg*.  That movie was one of my first foreign films.  It was my mom who introduced me to the concept of independent theaters. The theater was insanely tiny at that time and smelled of cappuccino rather than popcorn.  Strange posters filled the walls.  “Why don’t they play any movies I know here?” I asked her. “These movies are different,” she said with a twinkle in her eye.  We went into the theater, which seated no more than 50 people.  It was 75% empty.  We sat together  I was intensely interested in this sensation of being somewhere noone else was, watching something no one else cared about.

The previews were for movies I didn’t know, but I was interested in every single one of them.  This never happened at regular theaters.  Most of the movies at regular theaters were action movies or comedies that weren’t funny.  These were movies really exploring the human condition.  “Can we go see some of these later,” I asked my mom.  “Yes,” she smiled.  Two more older Jewish women filtered into the theater. 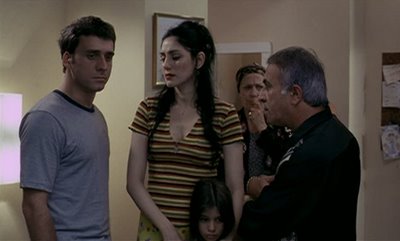 The subtitles and the Israeli feel of the movie were exotic to me.  But everything else I understood.  Lior Ashkenazi’s character was 31 and unmarried, an unmistakable sin in his Georgian family. (God forbid it happen to you, my internal monologue said to me. You’re going to get married really early.  At 21 if you can do it. ) He loved an Israeli woman with a child rather than the arrangement of shy Georgian girls his mother paraded forcibly before him.  He was torn between this love for the woman and her daughter and the obligations of generations of tradition.

He’s so stupid, I remember thinking.  He’s old AND he won’t listen to his mom?  What kind of son is he? Going around with some random Israeli girl instead of listening to his culture? Stop being daft, I wanted to shout at him (I’d just read a lot of Dickens and I liked the word “daft.”) The movie didn’t end well for his relationship with the woman he loved, or with his relationship with his parents, but it did end with a wedding-a late marriage.

When the movie was over, I saw my mom shaking her head.  It had moved her as well.  “That’s what happens when you don’t listen to your parents,” she joked at me, but I could tell she was half-kidding.  “What a hard family,” she was saying, and we left the theater.  “Want a cappuccino?” She asked me.  It was a rare treat.  We sat in the small cafe drinking the cappuccino and I felt so grown-up and sophisticated and forgot for a moment that, in Harrisburg, I lived in the geographical Dark Ages of world culture. And I was so happy to be sharing the experience with my mom.

We talked for some time about the movie, about other movies, about Israel, about far-away places, places where they drank cappuccino all the time.  After some time, we got up to leave.  I haven’t remembered that movie in years, but as I recognized Ashkenazi, all the feelings of my first foreign film clicked.

That was the really interesting part of Footnote. The fact that my brain had created its own cross-reference to the memory I’d locked away so long ago, the memory of being 14 and hungry for anything that was not Central Pennsylvania, of sharing movies with my mom, of a specific event that formulated views and opinions I still hold today.  Of the whole world before me.

Then I thought again about how terrible life was for me at 14, how weird and awkward I was, how high school was hell socially for me for the first two years, and how no one understood that going to see foreign movies with my mom at a half-empty theater was a life joy for me and that, maybe, I would some day want to go to Jerusalem or France or Greece or wherever they showed in all those movies and understand the feelings people were feeling in those movies, and I sat back in my seat, relieved to be where I was, when I was.

*The footnote for this post, which didn’t fit with the main narrative of the story, is that my mom also invited my piano teacher, who was in her late 60s at the time, to come see Late Marriage with us.  This was EXTREMELY awkward because there is a really intense sex scene with the signature European full-frontal nudity.  When you are 14, you cannot watch sex scenes with your parents, let alone with a woman who reminds you of your grandmother.  I wished I could dig a hole to China right under my seat. My mom probably did, too. Three generations of Jewish women sharing a unique uncomfortable experience.