How to really test the limits of your marriage 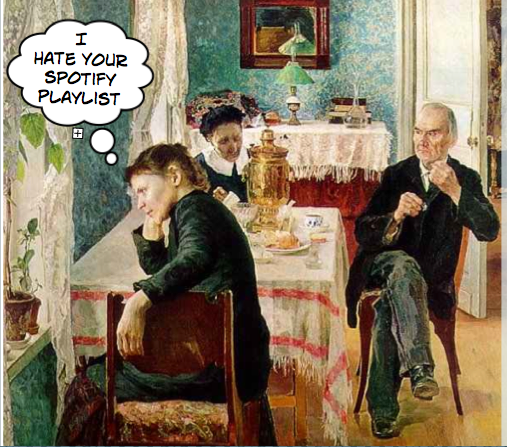 If you are a fellow Special Pretty Princess (also known as “creative type” ), you know that sometimes your  craft goes easier if you are playing music.

At first, he was ok with it.

“Anything to push you through to the end,” he said brightly as Annie Laurie played in the background.

“Ok, looks like you’re really writing,” he said, hesitating slightly as the Scottish MegaMix looped through a third time.  (Although I have a discerning and classy eye for literature and design, I have an embarrassingly Russian love of techno music.)

“Oh my God it’s this song again,” he said as Scottish Rain came on again.  Yes, this song really does exist and after the first month of about ten plays a day, Mr. B was singing this song like a textbook case of Stockholm Syndrome.

But somewhere in the middle of month two, he cracked.

“You HAVE to put on headphones,” he said in desperation in the middle of Loch Lomond.

“But it’s my pushing code song,” I protested. (I was in a startup frame of mind.)

“No one in the history of anything has EVER pushed code to Loch Lomond,” said Mr. B and sadly left the room.

Between the playlist, the neglect of the house, the empty refrigerator, and the piles of teacups and manuscripts everywhere, I’m actually not sure I’m even married anymore. Even if I was, I can’t find Mr. B. I think  the huge tumbleweeds gently rolling through our living room ate him.

Now that I’m slowly clawing my way back to reality, maybe I should check.

Guess what, though?  You can listen to the playlist, too!  But make sure that if you’re married you hide your marriage certificate. Just in case.

P.S. Right now I am listening to 0 songs on that playlist.  I’ve even worn myself down. Instead, I really like this song.