I realize this is post is little late, but I was otherwise preoccupied.

Since Mr. B gave me an iPad for my birthday and I started commuting by train, I have been going through books like crazy. I think I must have read around 30 books last year. The hard part is finding really good books. Those are the books you don’t want to put down even though it’s 11:49 and you have work tomorrow.   Fortunately, I’ve sifted through the piles and found some real gems this year. 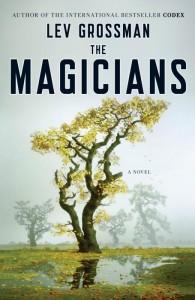 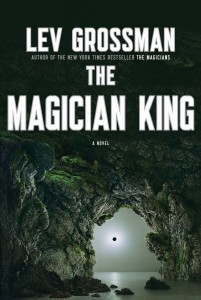 “He wanted to stick his finger in it and see what happened. Some story, some quest, started here, and he wanted to go on it. It felt fresh and clean and unsafe, nothing like the heavy warm lard of palace life. The protective plastic wrap had been peeled off”

I love fantasy books, but they have to be smart, too.  So right around the time that The Magician King was coming out, I decided to pick up its prequel The Magicians .  I don’t know why I didn’t read it before.  I just wasn’t feeling it, I think because the premise (boy Quentin is different from everyone else, attends a school of magicians and has adventures with his friends from the school) sounded too much like Harry Potter and as much as I love Harry Potter, I hate knockoffs.  I was wrong.  These  two books have quickly made their way into my top ten favorite books of all time.  They not only take you into another universe, they make you understand our world better. They’re both creepily dark and ridiculously hilarious, and Lev Grossman is incredibly talented; he leads you to where he wants you to go.  You feel like you’re right along with Quentin and the others on their adventures, and they perform magic in a way that seems actually possible.  Once you’re done with this book, you’ll be so sad that we really don’t have magic in this world. 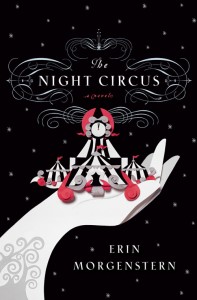 “The circus arrives without warning. No announcements precede it. It is simply there, when yesterday it was not.”

After I was finished with that pair of books, I suffered from withdrawal pretty badly.  I was extremely lucky that The Night Circus was published just around that time. It’s definitely not as savoury, thick, and badass as Magicians, but it’s beautiful and delicate and mysterious in its own way, and Erin Morgernstern capably takes you into a magical world that takes place during the night but is definitely not as dark and brooding as Brakebills. There are two magicians, a love story that spans a decade, and a circus that arrives out of thin air in fin de siecle Europe.  I saw the dead tree version in stores, and it is so beautiful. Creates exactly the right atmosphere. Also, Marco is hot. 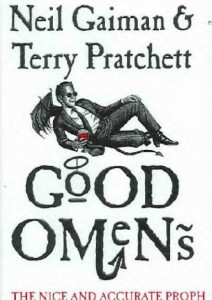 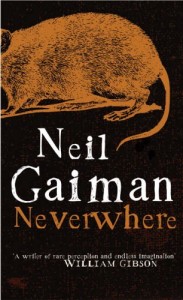 Many phenomena — wars, plagues, sudden audits — have been advanced as evidence for the hidden hand of Satan in the affairs of Man, but whenever students of demonology get together the M25 London orbital motorway is generally agreed to be among the top contenders for Exhibit A.

From schools for magic and circuses that vanish into thin air,  it’s only a short step to heaven and hell, and I am so, so glad I’ve finally gotten into Neil Gaiman, because he is just as amazing as everyone says he is, especially when he’s writing with Terry Pratchett in Good Omens. This book is told from the point of view of a Legionaire of Hell, the suitably British Crowley, and an Angel, Azirophale. Long-time enemies, they’re now more or less friends and have the annoying burden of saving the world from Armageddon. But first, they have to get past the traffic on the London orbital.    I read this right before we went to England and it is just such a perfect description of the British disposition and understated humor that I could not recommend it more highly.  Also, Crowley is hot. One of my other Gaiman favorites is Neverwhere, in which he creates a whole new layer of London out of thin air.  I believe it was this book that invented the steampunk genre. 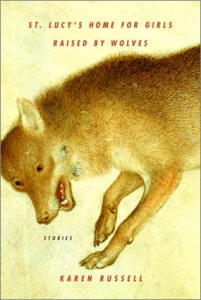 “Raffy has this magical, abracadabrical ability to transform all his “ifs” into “whens”.”

From there, it was a straight shot into magical realism with Karen Russell’s short story collection St. Lucy’s Home for Girls Raised by Wolves.  Just the title makes you want to read it, right? The short stories are all stand-alone, but they all take place in the Florida swamplands, a place rife with magic and misunderstanding, but woven into the ordinary ordinariness of growing up.  There is  the story of a boy who searches for his dead sister with magic swimming goggles, a girl who gets stuck in a conch shell, and the title story about an boarding school for girls with wolf parents which, in my opinion, is the best one.  Karen Russell has such a knack for choosing the exact right word that it’s a pleasure to read. 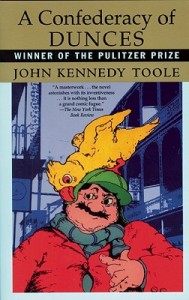 “I am at the moment writing a lengthy indictment against our century. When my brain begins to reel from my literary labors, I make an occasional cheese dip.”

And, grudgingly, after that, I moved on to literary fiction. But what I didn’t know is that I’d found another book in my top 10: Confederacy of Dunces by John Kennedy Toole.  I forget how I found it; I think someone in my Goodreads friends recommended it, but, oh my god. This is the book I wish I’d written.  Such a biting, succinct satire of modern society, of men who are schmucks, racism, bureaucracy, capitalism, academia, a beautiful depiction of New Orleans, and just everything wrapped all together into, really, The Great American Novel. If you haven’t read this book yet, you haven’t read American literature. 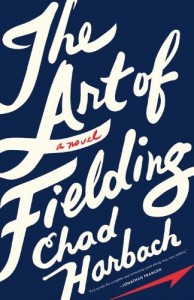 “Literature could turn you into an asshole: he’d learned that teaching grad-school seminars. It could teach you to treat real people the way you did characters, as instruments of your own intellectual pleasure, cadavers on which to practice your critical faculties.”

Speaking of TGAN, Chad Harbach’s The Art of Fielding is another obvious contender. It’s been on every book list in the country over the past year.  I don’t think it’s a 10, but definitely a solid 7 or 8.  If you don’t understand baseball, it can be a slog at times, but you technically don’t need to: the novel is not about baseball, but about people.  About how people are flawed, go to college, grow up, and do stuff in between.  Beautifully written, beautifully characterized, with tons of passages about Moby Dick, it’s just a good chunky read. 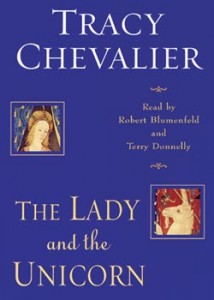 “Warp threads are thicker than the weft, and made of a coarser wool as well. I think of them as like wives. Their work is not obvious – all you can see are the ridges they make under the colorful weft threads. But if they weren’t there, there would be no tapestry. Georges would unravel without me.”

Next, we have The Lady and the Unicorn, by an author I’ve enjoyed before for her girl with her pearl earring, Tracy Chevalier.  Chevalier also creates worlds, but with history instead of fantasy.  Here, she literally weaves the story of the famous tapestry, The Lady and the Unicorn, the tortured painter that painted the original image, and the women caught up in his wake.  What was really, REALLY cool is the way Chevalier describes the making of a tapestry. AND. OMG. NERD BONUS POINTS HERE.  When we were at Stirling Castle, they had a tapestry BEING MADE LIVE with the ARTISTS RIGHT THERE DOING STUFF and you could ASK THEM QUESTIONS.  I geeked out for 20 minutes watching what Chevalier had only described in words.  It was better than Nutella. 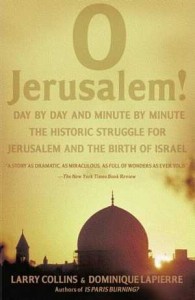 We also have one non-fiction book: O Jerusalem!  Completely 100% awesome history book that is, really, as non-biased as it possibly can be, an account of Jerusalem in the time leading up to Israeli statehood and the battle for the city in 1948.  I’d learned a lot about Israeli early history before in books and on tours in the city, but this book is so well-researched and with such a good tone that it makes you feel like you’re reading a novel instead of a history book.  There are anecdotes and pictures of everyday life, an examination of the Arabs’ and the Jews’ motivations, and bits of songs from the time. The way Collins and Lapierre describe the part when Israeli paratroopers decided to storm the old city on 2 hours of sleep, using diet pills to keep themselves awake, as well as descriptions of how the city was kept fed during the blockade, really make you appreciate what people will do for a cause.

Any good recs for 2012? Leave them in the comments.