Scotland the Brave: It’s about to get a little anti-Semitic up in Edinburgh. Also, rainy.

As you last recall, we were by the bonnie, bonnie banks of Loch Lomond.

When we got back to Edinburgh in the evening, we were cold, rainy,and exhausted. But,tough luck, because that night was the first night of Hanukah, and, as you guys know by now, the first Rule of Russian Tourism is : “if you’re here you might as well see OMGEVERYTHING POSSIBLE.” The day before while walking around St. Andrew Square, I spotted the tell-tale Chabad menorah, and decided that we were going to take a break from pretending to be WASPS and Japanese tourists: 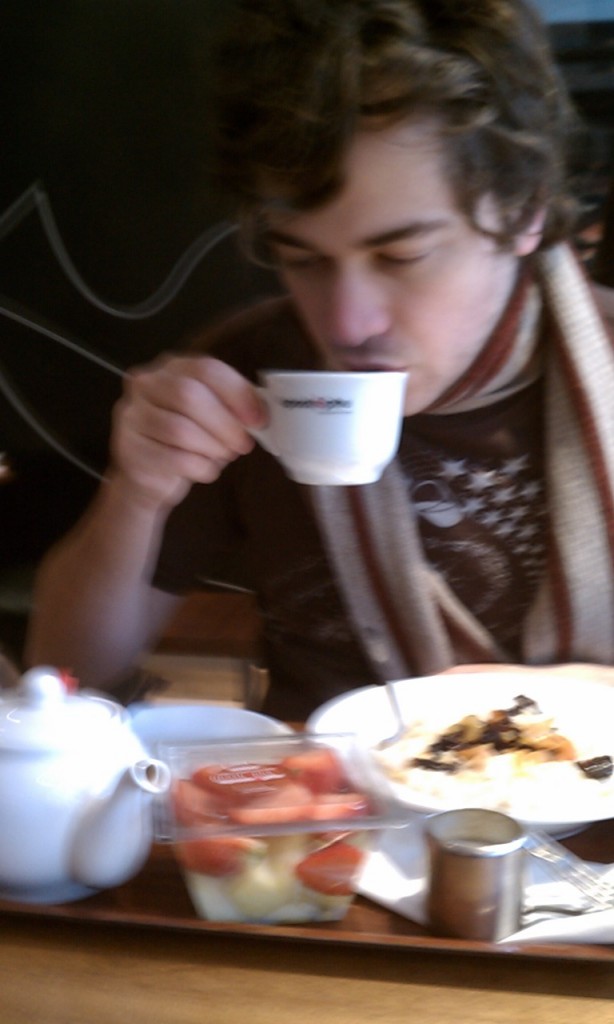 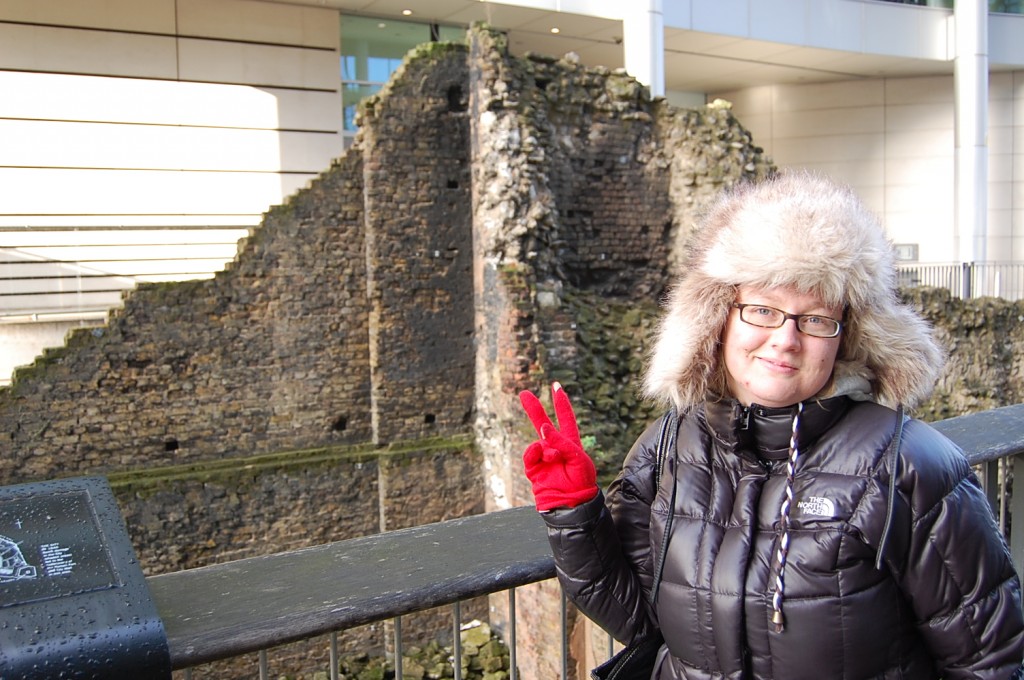 and go to the Menorah lighting.

In Scotland, I missed being Jewish in a country completely devoid of any acknowledgement of Jews living among the locals (i.e. kashrut certification, Larry David sitcoms, etc.). And for two, I was extremely curious about Scottish Jews. What was the deal? Were there really Scottish Jews? Did they also wear kilts? Were there any Scottish/Jewish foods?  And if so, how much would you have to pay me to eat something brought to you by the people who invented haggis and the people who invented gefilte fish?

So, sore, tired, and cold, we walked up to St. Andrew’s square, across from the Bank of Scotland and site of the Occupy Edinburgh protesters. 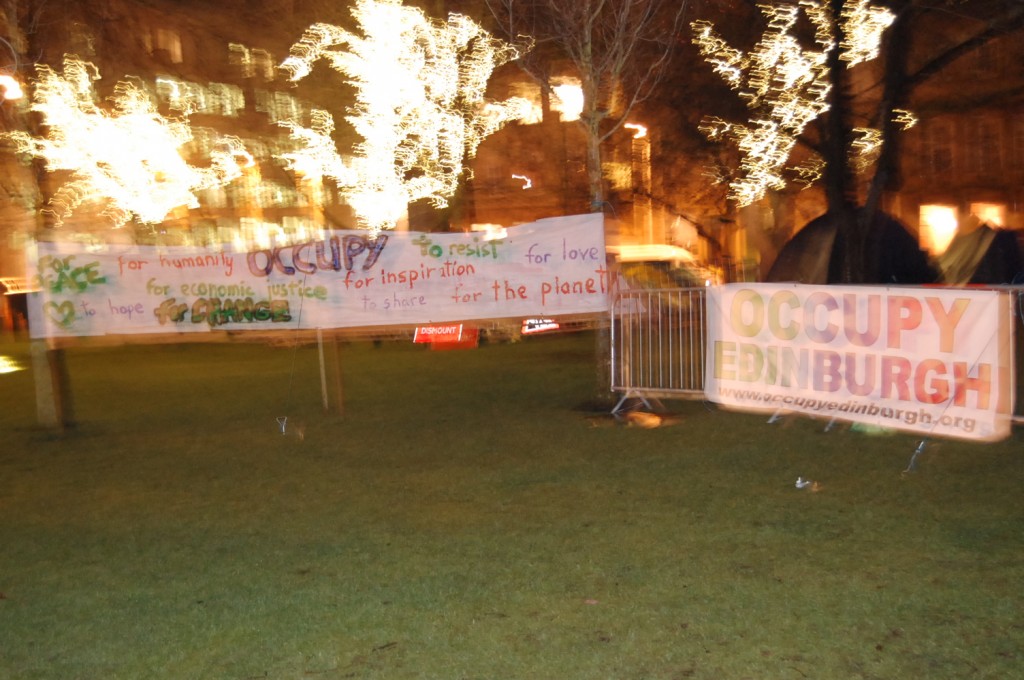 I know.  The irony of the Occupy Edinburgh 99% combined with all of us rich Jewish bankers was almost too much to handle.  By the time we came, there was a group of maybe 40 or 50 people and it was well after sunset.

“Stand in the corner and observe from a distance,” I instructed Mr. B.  “I don’t want to get caught up in this situation.”  By which I meant that I was terrified that the Chabad rabbi would make his way over to us, say hello, and make Mr. B put on a kippah or something.  As a huge introvert, I did not want any part of that.

Which is why I took all of my pictures surreptitiously without flash, which, I guess, kind of makes the whole event look like a cult gathering instead of a joyous celebration of light. Speaking of light and dark and weather, guess what?  Yup.  It was gently misting upon Goy and Jew alike at this point. 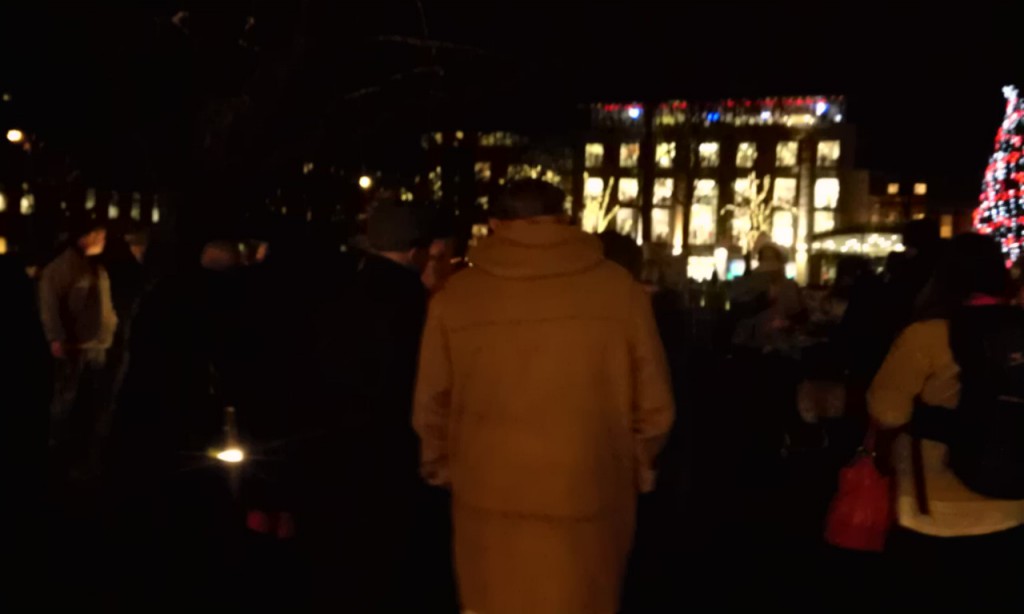 It was pretty surreal.  There were some older ladies, some younger guys (most with American accents), and a couple of  families with small kids who were wearing English/Scottish football team jerseys and also kippahs.  One guy, I kid you not, came in an actual kilt.  It was the first and last time I saw someone wearing a kilt in Scotland. I hope to God that he was wearing the Jewish tartan.

You never really think about how weird and funny it is to be Jewish and something else at the same time until you see someone ELSE being Jewish and something else at the same time.  Does it look just as ridiculous to other people when American Jews singe the American national anthem? But is it really that much better to be a Jew in Israel these days? I didn’t know. What I did know is that I was cold, damp, and unfortunately sober, and that we’d already been waiting 20 minutes for the menorah lighting, and I realized I didn’t even see the menorah.

However, people were walking by, looking at our group with  outright curiosity, especially the rabbi, who was all rabbi-geared up. I don’t know what the prevailing sentiment is in Scotland about rabbis or how many people have ever seen one, given that Scotland’s Jewish community numbers are wee, but the more I stood there, the weirder I felt about being Jewish. Not really pogrom-y, but not really comfortable.

“These guys have really poor event planning,” muttered Mr. B, partaking in that most ancient and scared Jewish traditions of kvetching. “If you were planning this event, we would already be singing Hava Nagila and well on our way to latkes.”   I shrugged in a Russian, non-committal way that suggests that the universe is always against you and there’s nothing you can to keep it from lightly misting on your parade if it wants to.

I looked around, but no one seemed to be as miserable as me, not even the guy in the kilt.  I was later reminded of the Corries’ rendition of Scotland the Brave, “How I wish the wind was warm! Scotland the Brave.”  By the way, I have been trying to reconcile my feelings about this song for the past week.  On the one hand, it is awesome. On the other, what does “wee fat Jews mean”?

Finally, an American rabbi, who I believe is the head of Chabad in Edinburgh, spoke up.  “Folks, the menorah is on its way and is being carried up the street as we speak.”  Up the street?  Why was the menorah not here?  This event planning was indeed terrible.  Finally it came, with two to three guys carrying it and municipal electricians behind it with a car and a ladder to light it.

I have to say, it took a while to light that menorah, not only because candles will, by the laws of physics, not light in a country whose Constant Dampness factor is 100%, but because it was also a bit windy and they had the wrong candle and oh my God everything was going terrible and thousands of years of Jewish tradition down the drain. 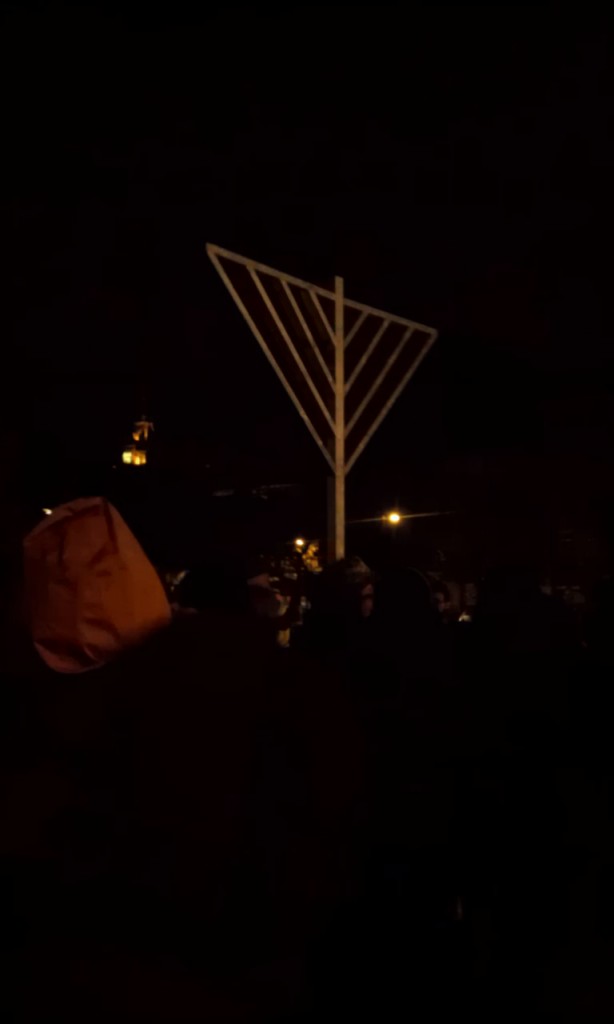 The full-fledged curiosity of onlookers continued and, juxtaposed with the fact that we were almost standing among the Occupy Edinburgh tents, which were silent for the night, embarrassed me and made me realize how absurd the whole situation was. Finally, after about 20 more minutes of groping in the dark,  they got the first candle and the shamash lit.  Then we sang all the right songs.   The Hanukkah spirit grabbed me, and I started to feel buoyant, like, yeah! We Jews can make it anywhere! “Now we can leave,” Mr. B and I said with relief.

It was at that exact moment that the bonnie Scottish wind blew the candle out.

I sighed and we left.

What I knew after we left is that I had a bunch of reading to do. The first thing I discovered is that there was a distinct reason that the menorah was late.  It was because the one I had seen the night before was vandalized and destroyed and, somehow, the Jews of Edinburgh had managed to rebuilt it in a single day.  So my sensations about feeling uncomfortable as a Jew in Edinburgh were not completely unfounded, although maybe this was a distinctly isolated incident.

The second thing I learned is that there are some real ballers in Jewish/Scottish history, the most baller one of all of them being Lord George Gordon

“In 1787, at the age of 36, Lord George Gordon converted to Judaism in Birmingham, circumcised at the synagogue in Severn Street now next door to Singers Hill Synagogue, something rare in the England of his day. He took the name of Yisrael bar Avraham Gordon (“Israel son of Abraham” Gordon—since Judaism regards a convert as the spiritual “son” of the Biblical Abraham) and underwent brit milah (“circumcision”). Gordon thus became what Judaism regards as, and Jews call, a “Ger Tsedek”—a righteous convert.”:

Can you IMAGINE converting to Judaism at one of the most hostile times towards Jews in history? (Ok, that was all of the times, but still). Can you imagine being circumcised in 1787?  Think about it for a minute. I did. And when I did, I realized that it was probably more painful than having to wait 40 minutes for a menorah to be lit.  Although, we were waiting outside in the Scottish weather.  So I don’t know.