Scotland the Brave (but STILL INCREDIBLY rainy): The Lochs and Stirling Castle

When we last left off, we were still in Edinburgh.  In between Edinburgh and Glasgow (and kind of during), we took two day tours, one to Loch Lomond and the other to the Highlands.  This is where the real Scotland is, the one you can’ t feel when you’re in the cities (although, by God, it was hard to leave our warm and comfortable apartment in Edinburgh for the Highlands, where the weather forecast is always this. 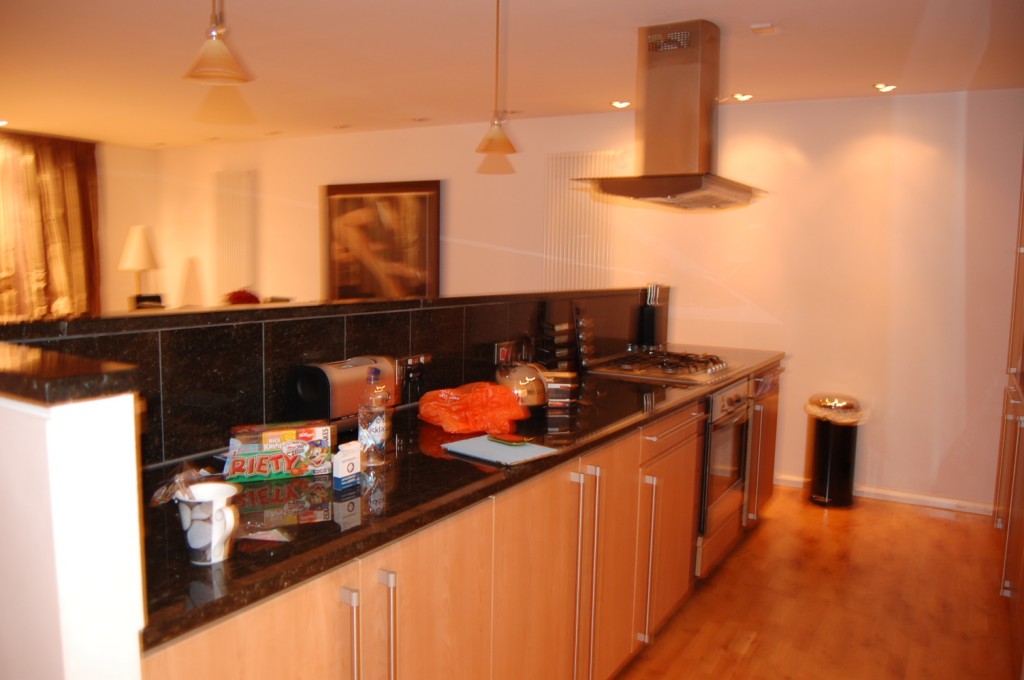 P.S. On BBC (or, none of this CNN bullshit, as they call it in the native dialect), there’s half an hour where they do both news AND British sign language. *dies of classiness* 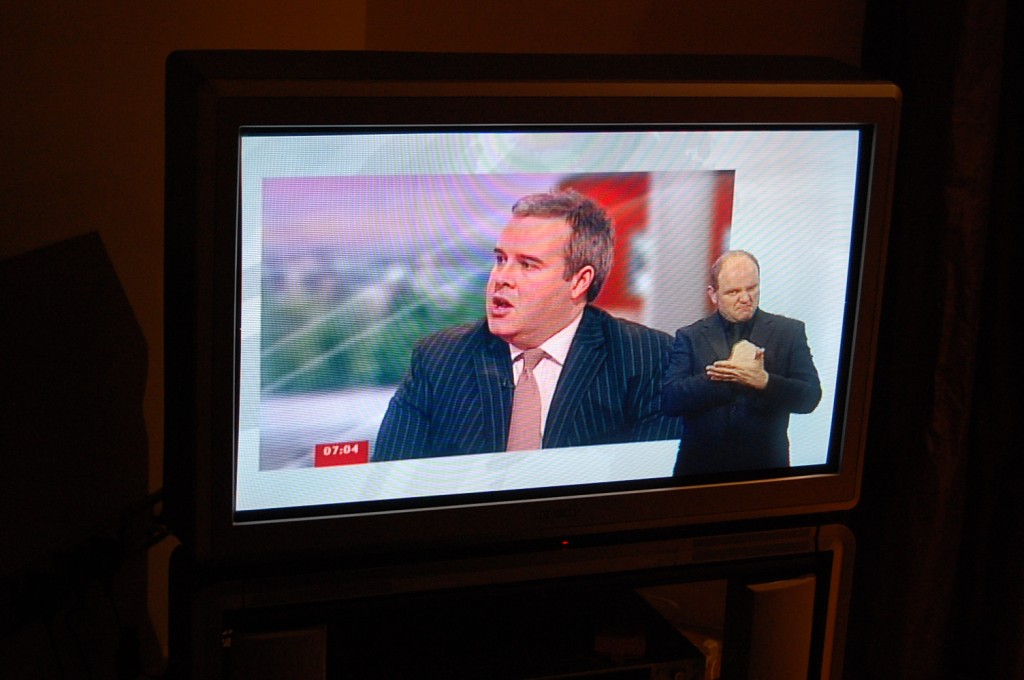 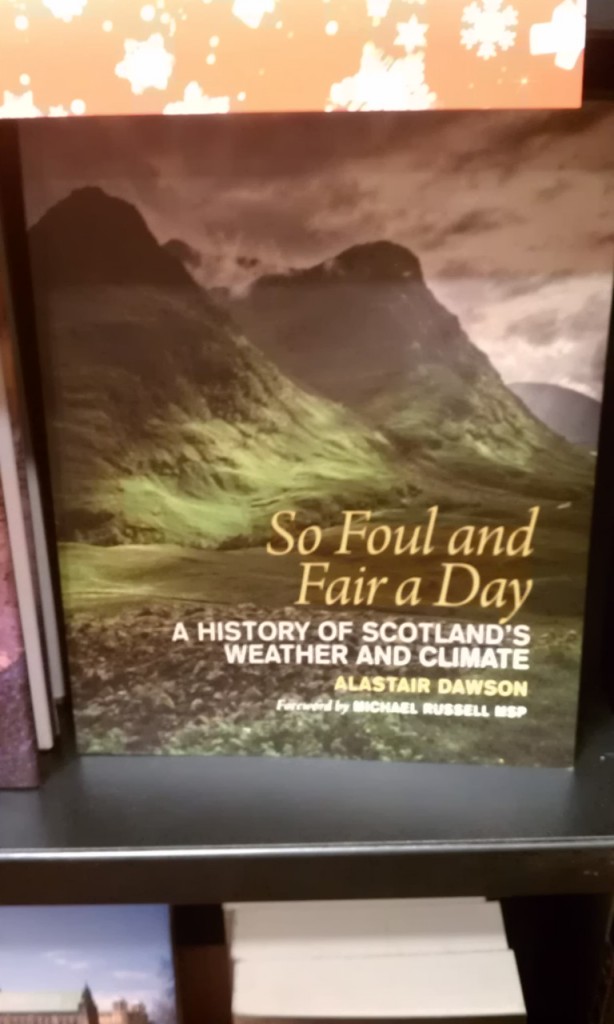 Anyway, We left Edinburgh behind for a day and traveled to Stirling Castle while our charming guide told us snippets of history about William Wallace, Robert the Bruce, and the fact that Edinburgh used to be the Jersey Shore of Scotland. Mr. B and I kind of got the gist of it, but really what we were busy doing was trying to imitate her accent. I have a real problem with hard Rs (which is why I love French and Hebrew), so I don’t think I can ever be Scottish, which is disappointing for me personally, but I’m sure is a relief for the Scottish Nation.

The day was, unsurprisingly, cold and rainy, but by the time we got to Stirling Castle, the weather had really turned up. Namely, it had stopped raining hard and was only misting. 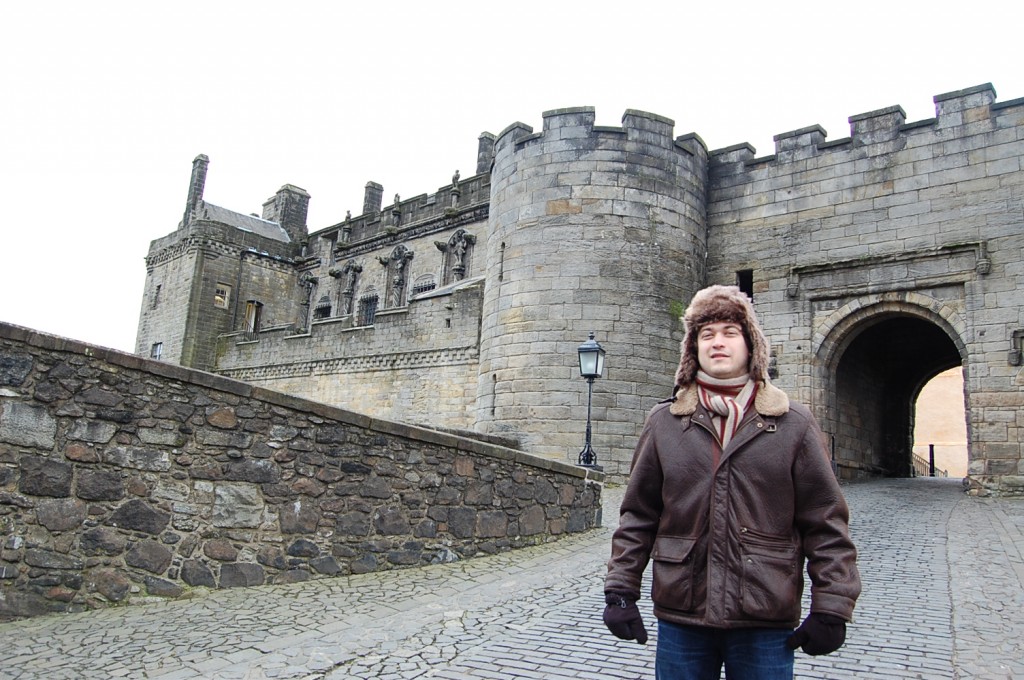 Stirling Castle is impressive for many reasons. The first thing that impressed me is that everything in the Middle Ages is conveniently Vicki-sized. 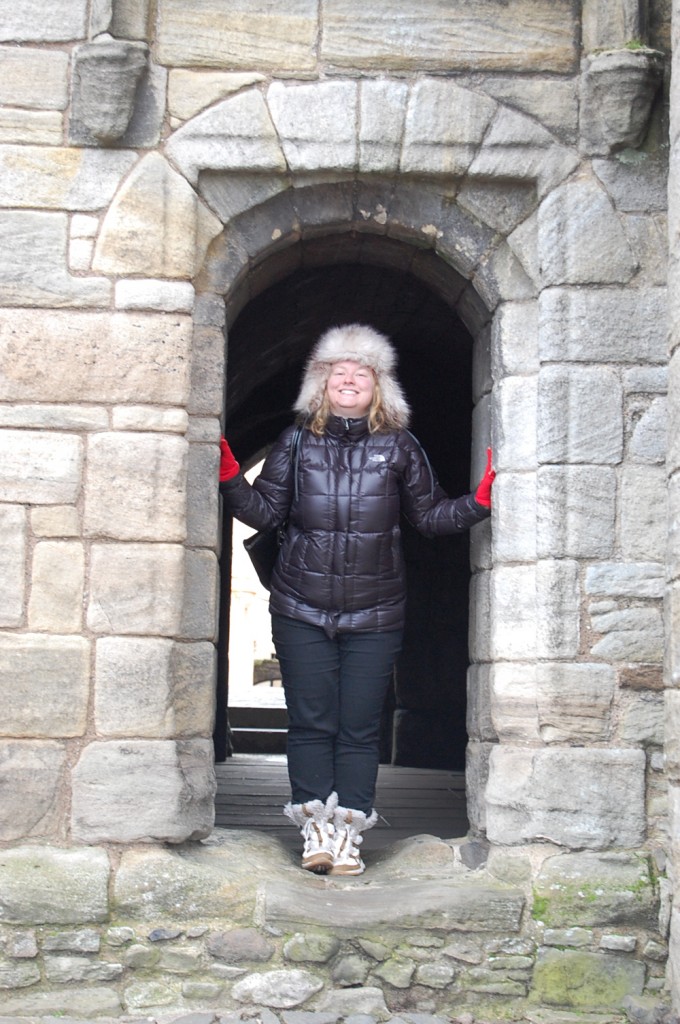 Doesn’t matter that the reason it is so is because pretty much everyone had dysentery and scurvy and didn’t grow properly.

The other impressive thing is that there were almost NO Asian tourists there since it was a few days before Christmas, so we had the castle almost all to ourselves. It should be noted that I am in no way racist against Asians.  Just Asian tourists. 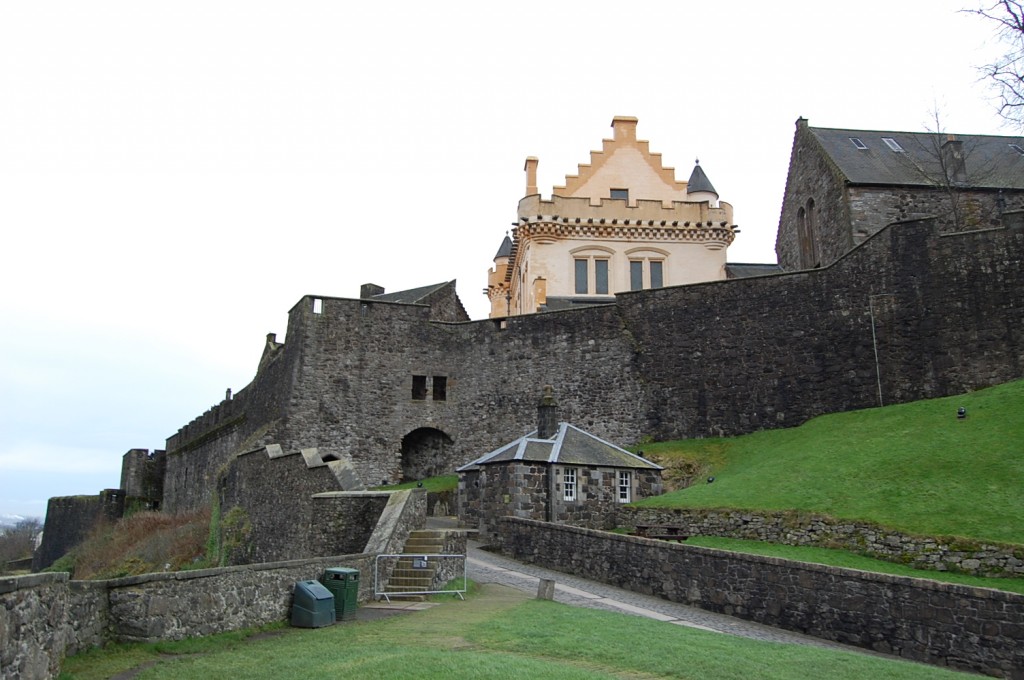 It’s good to be the king.  You can have as many naked chicks as you want. 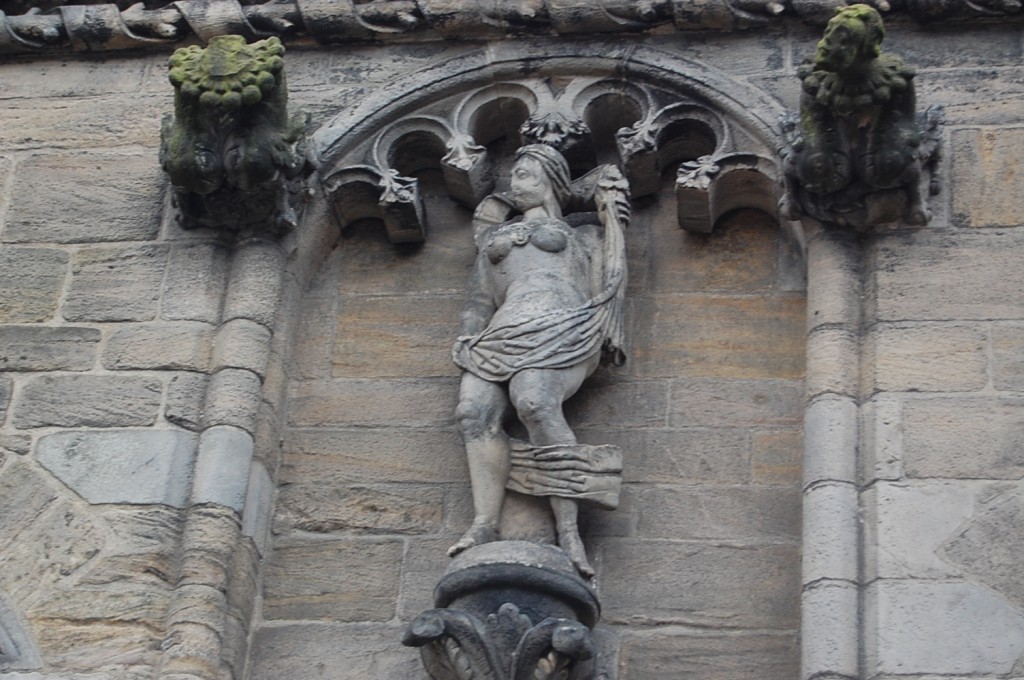 This one just happens to be Venus.  Lucky bastard.

There’s also a good view from the castle…of the Scottish weather. 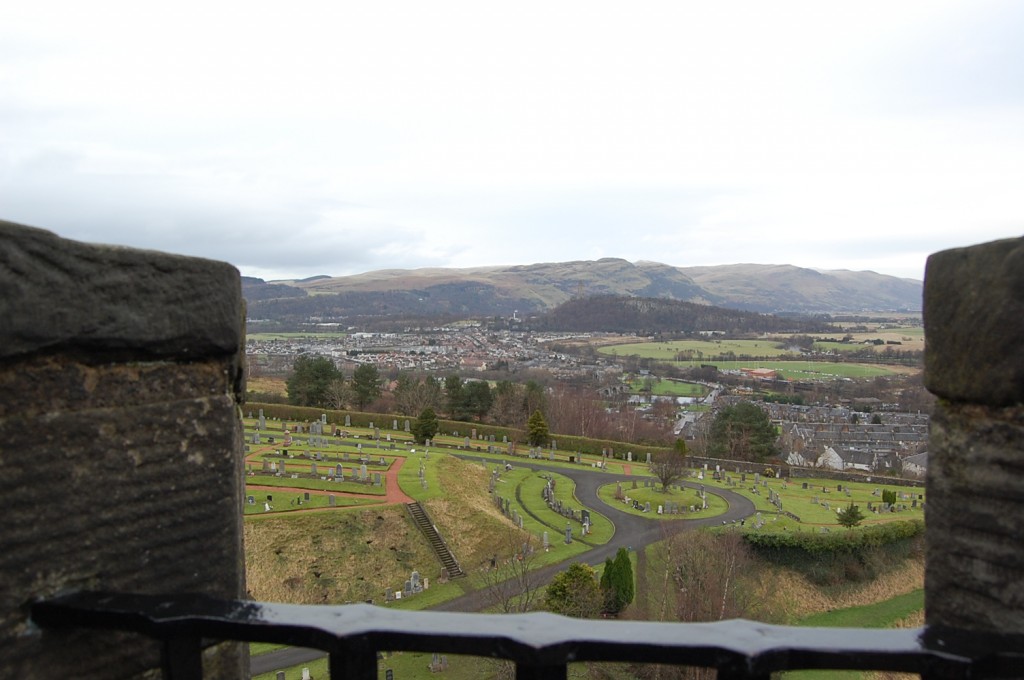 What I really love about medieval castles is that they’re AWESOME.  Like, people hundreds of years ago actually lived in them, defended them, bled for them. What I hate about medieval castles is how they’ve been prettified for modern tourists. I always get so embarrassed by them  For example, at Stirling, there is an impersonator impersonating what I imagine to have been a Steward courtier.  He said that  he could tell from our accents that we were from ” the New World.”  I always cringe at this kind of stuff, but Mr. B graciously obliged. “Sure.  We’re going to bring the potato over to you guys soon. Or, as you would call it, apple of the earth, probably.”  “Oh, aye. I know those.  I also hear you have fruits that are reported to be sweeter than apples, and rounder.” “Yes, citrus.”  This went on for some time until I died of fremdschamen.

Luckily, soon after, like another baller Victoria before me, we set off for Loch Lomond (the longest loch, or lake, in Scotland) and the Trossachs (one of the two national parks, bordering the Highlands). We stopped in a cute little village for lunch, a village where NO ONE understood our accents and had trouble with our credit card (oh, the shame of a non-chip American card.)

It was at this juncture that the tour guide introduced something that would Mr. B would regret being introduced to to this day: A song called   The Bonnie Banks of Loch Lomond.   Are you familiar with this amazing piece of music?

I’ll assume you’re not so I can explain it to you.  Basically, the British were assholes (or the Scottish were assholes, according to how you look at it), and tortured Scottish Jacobite sympathizers/freedom fighters/terrorist soldiers. The story goes that two brothers were caught and tortured by the British, and the British, playing Cheney-esque mindgames with them, said that one of them could go back, but they had to choose which one.  The younger brother, who was only engaged, said he would die because the older one had a family and wife.  So he wrote a letter to his brother, and in the letter was this song, saying that he would be taking the “low road” i.e., death, and that he would be in Scotland before the older brother, because when someone dies outside of Scotland, legend has it that their soul will return.  Here it is:

I don’t know what it was about this song, but, combined with the fact that we were driving around said Loch Lomond at the time.  It’s obviously meant to garner sympathy and nationalism and probably not even true, but I don’t care.  I love it. It stirs something really deep and passionate and imaginative within me.   Unfortunately for Mr. B. Because I’ve been listening to it non-stop for the past two weeks.  I’ve been listening to the version above, which is my favorite.  There is also a rock mix by the famous Scottish band, Runrig, one of the bands to participate in the Scottish Gaelic language and culture revival in the 1970s,that is played at the end of every dance and public function in Scotland as an unofficial national anthem. There is, also unfortunately for Mr. B, a dance remix that I listen to at the gym when I need to really push to finish that mile.

By the time, I was completely enamored with Loch Lomond and Ben Lomond peering out from the mist, our tour guide announced that we were-Oh God-getting out  and TAKING A HIKE. In the RAIN. Who does that?  Scots, that’s who.  And, it turns out, wet Russian Jews. But it was 1000% worth it.  Because it was BEAUTIFUL.  Everything was silent. No hikers.  Just the crunch of our own footsteps, the frost of our breath, and the Scottish Highlands, across Loch Lomond, staring back at us. 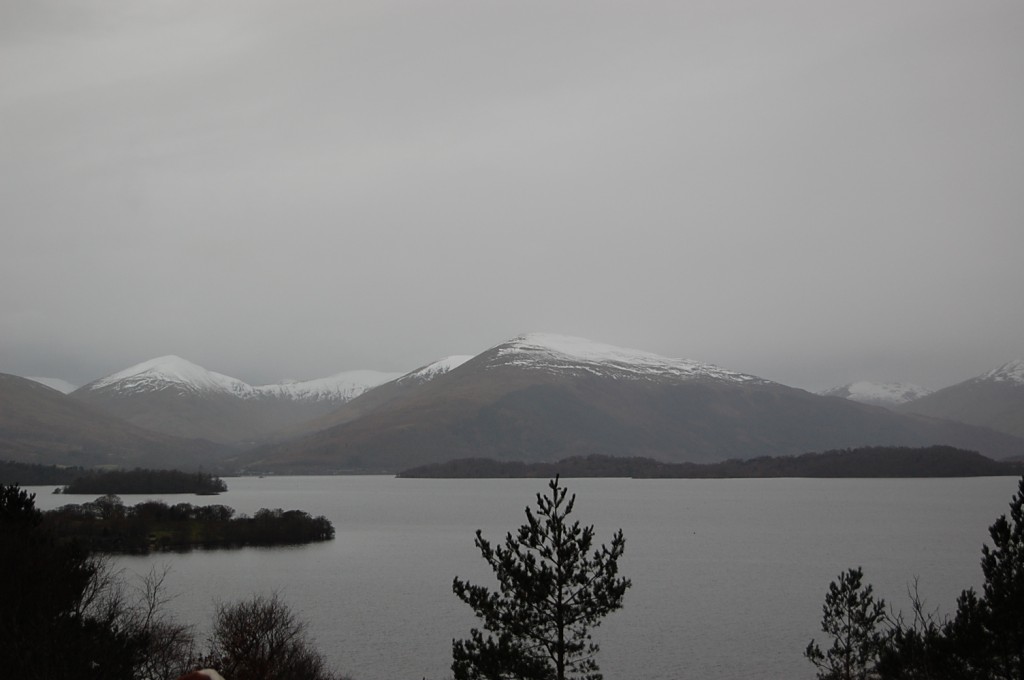 Oh, right.  And a very aggressive French woman, right behind us, ruining the shot. 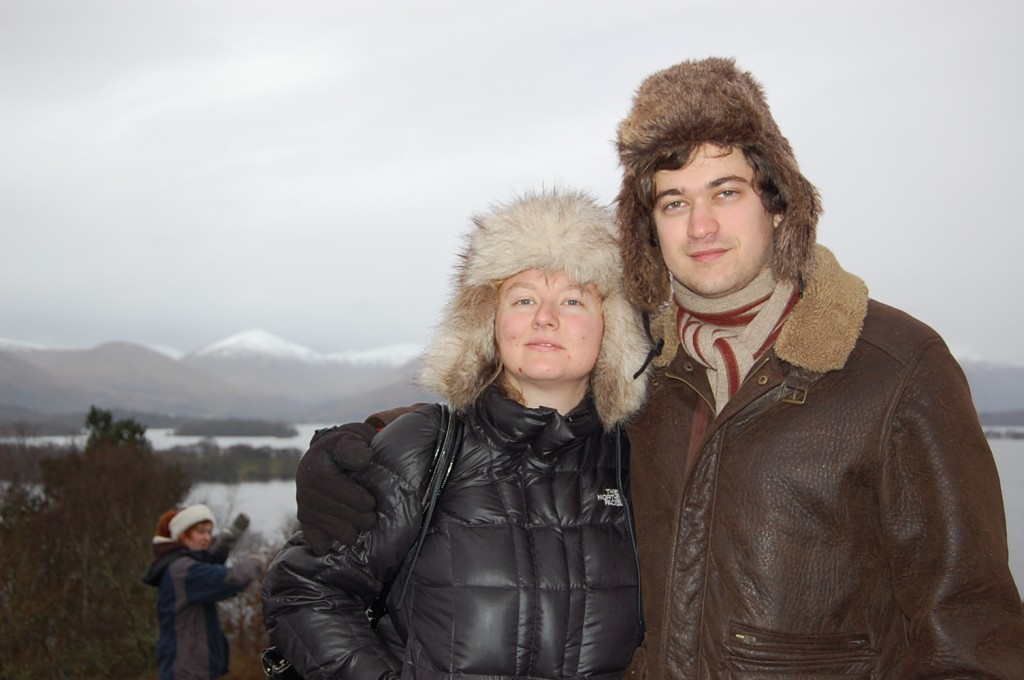 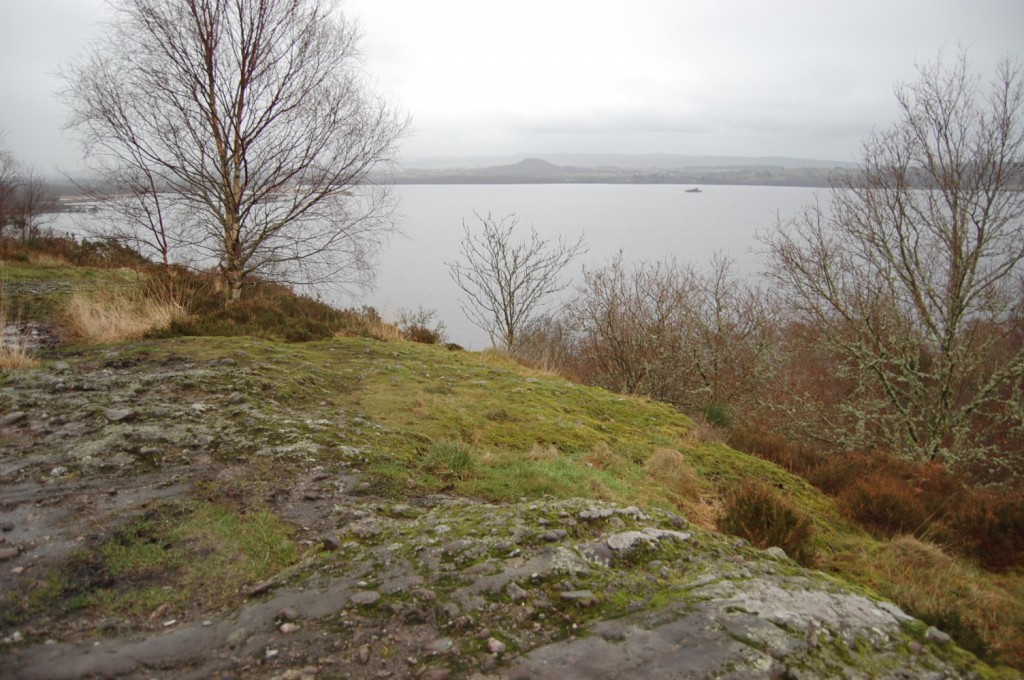 Oh my God, Scotland, you’re killing me.  And this is in the WINTER.  Imagine what it looks like in the spring…when…ahem…”The wee birdies sing, and the wild flowers bloom”-

This is probably my favorite picture from the lake, Mr. B skipping a stone into infinity. I took it by accident: 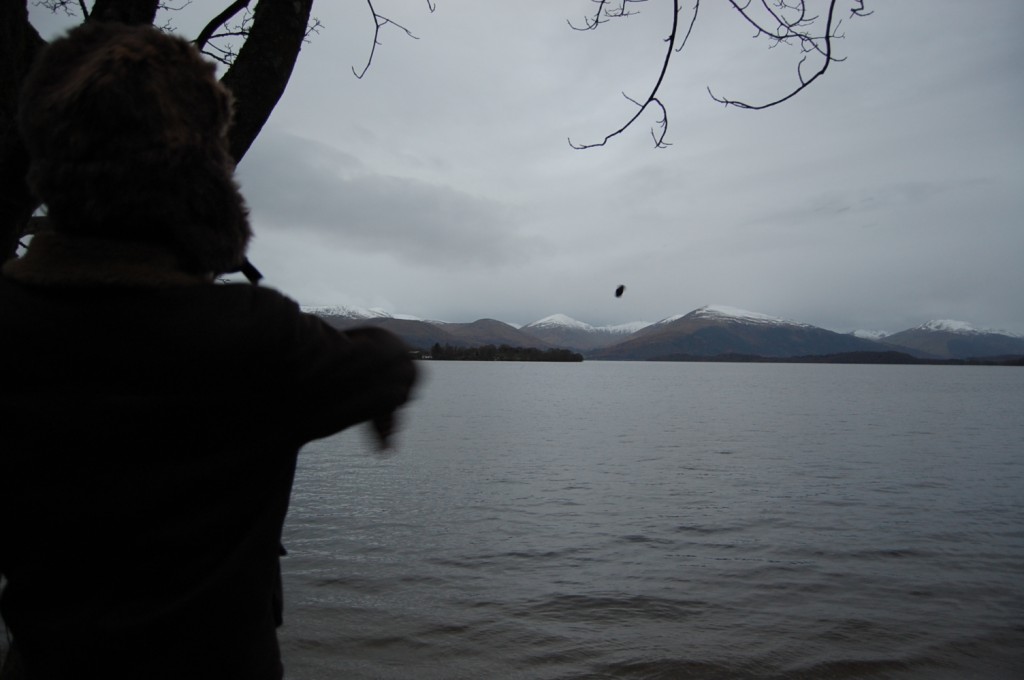 After that, I became the day ended,  so it was back to Edinburgh, where we would find out how Edinburgh Jews celebrate the first night of Hanukkah. Because, if you remember correctly, Russian tourists don’t stop.

What also didn’t stop in my mind was this pressing urge to go deeper into the Highlands.  The whole day, by Stirling and by Loch Lomond and in the villages, we’d been on the outskirts of them, our tour guide taking us tantalizingly close, telling us about their history, the unique character of the people that lived there, but never once setting foot in them.  I knew, as I feel asleep that night, that I had gotten a taste, and I wanted much, much more of the real Scotland, and that if we didn’t get up into the Highlands, our trip would be a bust.  I also knew that our charming, sexy, and bashful trip planner had left a day open in our itinerary just in such  a case where we’d maybe want to take another day tour and I thanked her.

But the Highlands would have to wait for a couple more days.  Because there was still more to do in Glasgow.  Not to mention wait for a stolen menorah.