A glimpse into the Edwardian period 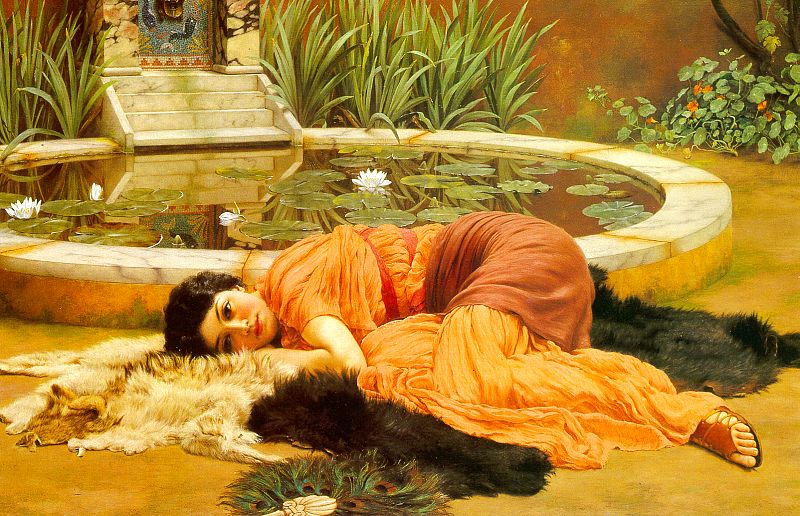 Victoria flounced into the airy, spacious dining room where her dashing industry magnate husband was already breakfasting on porridge and strong tea.  The maids were fluttering about, just out of sight, dusting the china cabinets and it smelled like fresh linen.

Mr. Rothschild was engrossed in his newspapers.  Not only was he rich, but he was $uper $mart and knew all sorts of things about physics and electricity that Victoria would never dare to read about because she’d heard that if women read too much, they became sterile.

“Did you have a good night’s sleep, darling?” Mr. Rothschild asked warmly. They slept in separate rooms, since those were the times. It also had something to do with the fact that Mr. Rothschild took an excruciatingly long time in the bathroom and used up all of the hot water. It was such a bother to have gallons reboiled for the same bathroom that Victoria had been forced to accept another washroom.  Fortunately, the Rothschild estate, Wellmere-Ascot-upon-Southerly-Pembroke, had fifty billion bedrooms with attached vanities, so it was no bigs.

“Why yes, I did sleep well,” she ventured and delicately floofed down in the chair the butler pulled out for her.   “Edgar, please serve the cold oatmeal,” she said.  Victoria was on a new health kick which involved the unthinkable-to-Mr.-Rothschild act of eating cold oatmeal and other cold grains. She ate slowly and delicately wiped her mouth after every bite.  She wondered how to bring up The Incident. “Darling?” she ventured.

Her husband was deeply engrossed in reading and didn’t hear her.  She sighed and picked up a bell placed at the table for this very purpose, ringing it to get his attention.

His head lifted from the papers. “Yes, my love?”

Victoria swallowed. “Darling, do you remember the combination typewriter/telegraph you bought me last week?”

“Oh yes, my love.  You said that it was the best one on the market and that it would enable you to communicate most quickly with your lady friends. You said you would know everything going on in the world with it.  You vehemently protested against getting the other brand of typewriter I suggested to you because you said it was simply the latest news in technology.  It’s so light and portable, you gasped. You called it the best teletypewriter on the market, as I recall, moppet.”

“Well, what about it? Are you enjoying it, darling? ”

“Yes, well, remember when you told me to get a warranty for it, or at least a protective case so that it wouldn’t bang about?”

“Well, yes.  Tori, it’s a very expensive piece of equipment, especially  considering that you are not using for anything other than your useless lady gossip activities.  How is that case coming along?”

“But, before I was able to do that, I was carrying it from the drawing room, through the retiring room, past the wet bar, past the champagne closet, to the library, so I could sit and look outside at the British moors and such as I wrote, when I dropped it and cracked part of it and-”

“I dropped it,” she said, and dissolved into womanly sobs and hysteria.

“Oh, moppet.”  Mr. R was silent for a moment. “Come here so that I may comfort you because you are batshit crazy.  It’s just a teletypewriter. But, you didn’t get any warranty on it?”

“No, because I never dropped the last one I owned,” Victoria said between muffled sobs. “Now I’ll never be able to replace it for half the contract price.”

“Victoria, look at me,”  Sir B raised her tear-streaked face to his firmly. “We are Rothschilds, even though it IS only on my mother’s side, we are still balling Extremely Hard.  Look at this mansion.  Look at our servants. It doesn’t matter.  I’ll buy you a new teletyperwriter every day of the week if you want. In fact, we’ll have the butler head out and arrange to have a new one bought for you today.   Psha. Easy-peasy. ”

“Anything for you, moppet,” he smoothed her hair and wiped the tears off her face. “Besides, we’re not like some common people who would panic, realize that they are klutzy morons,  immediately contact the seller to see if there’s anything they can do in the way of a replacement teletypewriter, call every teletypewriter repair shop in town only to find out that it is too new of a model to be fixed, then have to call all the way to the manufacturer of the said teletypewriter, only to be told that it will take six weeks-SIX WEEKS- to mail in the teletypewriter, replace the part, and mail it back to you.  And then where will you be?  Sans teletypewriter, sans any normal kind of human communication. The outrage.  The umbrage!”

Victoria laughed. “You mean people really do that?  Oh, those poor ignorant…poor people.” She got up and primly folded the non-existent wrinkles out of her skirts. Her husband laughed, too, and rolled some of his finest tobacco into  several 100-pound notes, then lit it.  He looked up philosophically at the guilded ceiling as the money burned.  “It’s a good thing we’re Rothschilds, Victoria.”

Victoria kissed his hand.  “Darling, I suppose I will have to write by hand to all of our family and friends that I shall not be able to write them teletypewritten letters for the next several weeks.  And that they will not be able to reach me, as well. Oh, how hard it will be not to talk to the outside world for the next several weeks! Whatever will I do!” Her hand started shaking involuntarily at the thought.

Mr. R tapped his cigarette so the ashes fell on the carpet, and the butler kneeled to sweep them up.  “I suggest you ease your anxiety by bitching and moaning about it in your diary. And in the meantime, make the servants write your hand-written letters! ”

“You’re always so right, dearest.  Where would I be without you,” Victoria laughed, and headed upstairs, already composing a story about the incident in her mind.

The butler followed her out and headed down to the steamy warmth of the kitchen.

“What’s the word from upstairs, Mr. Ogglseby,” the cook, Martha, asked him, knee-deep in hazelnut chocolate confectionery. “Those Hebrews are CRAZY,” Mr. Ogglseby said, taking his monocle off and polishing it casually. “But at least they pay well since they’re balling HARD.  Good thing we live in a time when EVERYONE can afford to hire servants.  Those two would lose their heads if they weren’t screwed on without us. They break everything in sight, use up all the hot water in the bathroom, constantly dirty up the house, and burn money, for God’s sake. If only everyone could afford first-class servants like us to do all of their menial drudgery, and do it in a classy way.  Without us, they would constantly be actually forced to Do Stuff.”

“You’re telling me about it,” Martha said, stopping to wipe the sweat off her ample brow and then continuing to crush hazelnuts. “My cousin what lives up by Edinburgh cooks for a family, name of Gordon, that used to be normal God-loving Protestants,  had an ancestor converted to that heathen Jewish faith hundreds of years ago.  Said he had to cut his own-”

Mr. Ogglesby coughed.  “That’s enough, Martha.  It’s about time I go downtown to look for another teletypewriter for the Mrs. After all, only God knows what will happen if she is cut off from it for the next week.  You’d better make more hazlenut cakes in case she becomes distraught.”