This post is kind of hipster because I talk about old-school radios and miss them, but I also love my iPad

When I was 12, I bought a shortwave radio that I could also tune to international channels.

It offered a  terrible user experience, as the cool kids would say these days. It caught a signal maybe 20% of the time.  You also didn’t know which country you were tuning to, only the frequency. But the 20% of the time it did work, it was amazing.

After I’d finished all my homework and climbed into bed, I’d lie under the covers so my parents wouldn’t hear and try to catch stations from across the universe in the dark.  It always reminded me of my mom’s stories of my grandfather tuning to Kol Israel in the 1970s, trying to get through the dampers that the Soviet Union had installed to block external radio signals.  (By the way, if you’re looking to go down the nostalgia rabbit hole, start here.  It’s a broadcast of Moscow Radio IN JAPANESE from the 1970s.)

There would be static, static, static, then fine-tuning, then, finally, a voice broadcasting from halfway across the world. Once I was able to catch Russian radio and I listened for half an hour, fascinated.  Sometimes it would be somewhere in Africa. Sometimes, Japan or China.  But never for very long, and never something with context that I could hang onto.   I’d get delicious shivers down my spine at imagining all of the far away places that the static on the radio was trying to reach, wanting to be there, but also very glad to be safe at home.

Recently, I discovered the same thing for my iPad, TuneIn Radio: 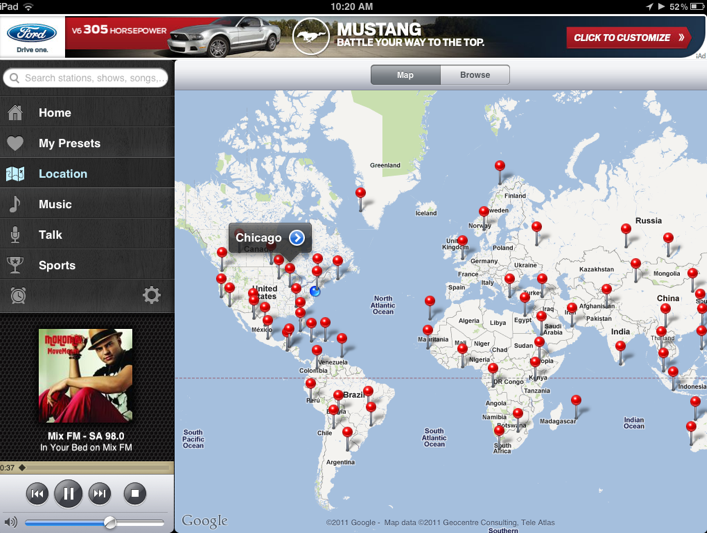 and it’s pretty much like the same thing.  I mean, sure, you could technically do the same thing on your computer with individual radio stations, but it’s not the same because the app aggregates by location and type.  I have to say the fact that I can tune to any station with the press of a finger does take some of the mystery and romance out of it, but I still get the same sort of chills from the fact that I’m able to listen to radio from Kenya.

Over the past couple of weeks, I have been listening to a crazy amount of music from all over the world.  When I’m cooking on weekend mornings, I put on Russian radio.  For cleaning, it’s usually a pop station from the Maghreb or Kahliji. Sometimes it’s the BBC’s Hindi service.  Sometimes I’ll listen to stations from Johannesburg, and wonder how different we all are, but how much we all have in common.

Usually, though, just as I’m about to reach a profound thought about humanity, Mr. B comes and tunes the app to a top-40 station in the US.  But that’s ok, because I like pop music, too.  Especially when  I find out that it’s sexually suggestive songs in English by a Congolese-Swedish guy playing on a conservative Saudi station.