I actually wrote this post two years ago but haven’t been brave enough to publish it until now.

It’s about a secret love of mine: Christmas carols. Technically, as  a (nonobservant) Jew, I know I shouldn’t enjoy them or sing them, a knowledge that was imparted on me by my mom who, when I was learning Silent Night in third grade, acted as if she was personally experiencing the Inquisition when it gets to the part about yon Virgin and Child. I was also afraid to say the word ‘Jesus’ until I was in high school.  I was always embarrassed to sing them at home and when I did, it was always in the shower. 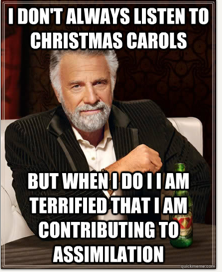 From youth onward, singing Christmas carols became a stigma for me and an involuntary jolt of shame and fear came upon me every time we had to sing a song in class that had anything to do with Jesus or Holy Nights or Yon Virgins.  I would panic and try to swallow the words as much as I could while burning in shame that I couldn’t just sing them like my classmates could.

Theoretically, this is good.  Jewish (or Muslim or Bahai or areligious)  kids shouldn’t be singing Christmas carols about a God they’re not supposed to believe in.   And, schools need to recognize this and not have any religious content in their holiday programs (many of which I’ve had to suffer through both as a clarinet player all through high school and middle school and a member of our school chorus.)  Not balanced content (i.e. one Hanukkah song, one Christmas song, etc.)  Just no religious content at all. And don’t label it as the War on Christmas. Just label it as a separation of church and state.

At the same time, Jewish parents shouldn’t overreact and stigmatize kids against everything related to Christmas, which is more and more becoming a secular holiday in the United States.  Particularly when one of the kid’s other parents might be Christian.  Granted, my dad is a pretty stoic Christian.   He never took me to Russian Orthodox Christmas services (probably out of concern for my sanity, seeing as to how the whole service is held standing up). He never explained Easter, or much any Russian religious to me in the same way that my mom explained Judaism. But he did take me to a monastery when we were in Russia, which was awesome and one of the experiences I remember most about that trip. There, my aunt asked me to drink some water that had been blessed by the priests of the monastery, which I shied away from very uncomfortably.  But why?  Why couldn’t I have been raised in dichotomy?  I’m not saying we should have celebrated Chrismukkah, because that’s  just lame.

But,  I’m  sad about the fact that I don’t know of any Orthodox Christian tradtitions to pass on (not even egg dyeing.  I got nothin’).  Because it is still part of my identity. And while I don’t identify with the sense of joy and celebration that are tied into Christmas carols because I’m not Christian, I am  still going to be rocking out to the following song, which has three of my favorites (Europeans, tuxedos, and cathedrals). Just in secret, still.  Because the fear never leaves you.