Why Every Woman Should Know How Her Blog Works or,Why Women are still marginalized.

This Saturday, I attended WordCamp Philly at beautiful Alter Hall, which is a conference for people who hate spending time outdoors. Also it’s for people who enjoy using WordPress to build their website. (Like me! This site is built with WordPress! Also with sweat and tears.)

See?  Here I am in my natural habitat: 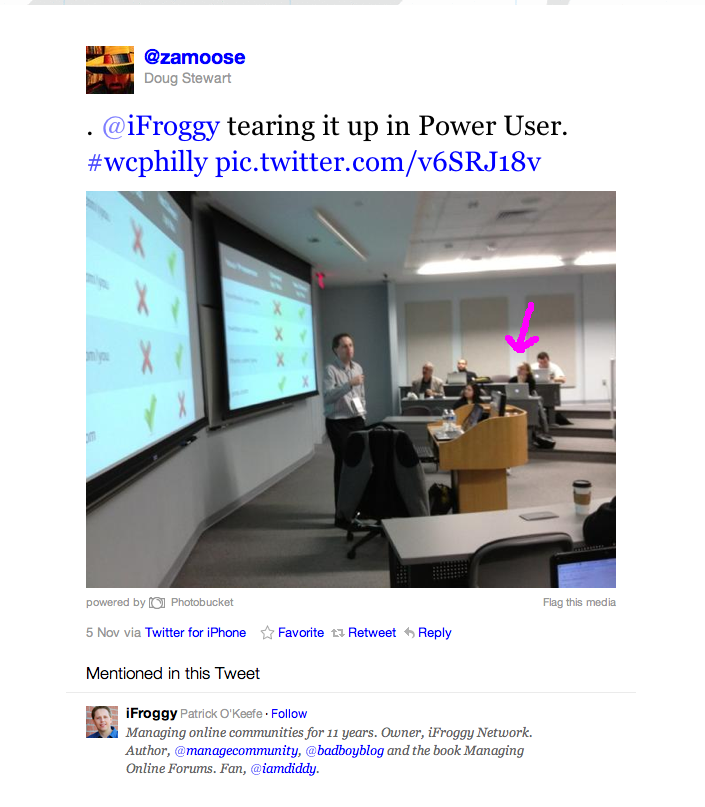 I learned a TON about how to build a better site for *YOU* guys, the users, some of which I’ll be playing around with over the next couple months here, why Facebook is the future of creepy data, and why you shouldn’t use WiFi mostly.  I also got to meet some cool people I’ve been interacting with through Twitter up until now.

Aside from all the cool stuff I learned, I also realized that, women were the minority at this conference, which was ostensibly designed to be very user-friendly and non-intimidating.  Well, that’s not completely right. There were maybe 40% women at the beginner sessions, 25% at intermediate, and 5-10% at developer/designer.  Maybe 3 or 4 of the speakers were women.  And yet, about 50% of all bloggers are women, and WordPress is quickly growing in popularity as the blogging platform of choice.   (Maybe I just made that statistic up.)

It's all dudes. Pic via @wjdennen

It wasn’t a huge deal for me; I’m used to it.  In the conference I went to on Wednesday with my coworkers and boss, I was the only woman from our group. I would say maybe 35% of that conference was women.  At work, on our floor of 50ish people,  I’m 1 of maybe 15 women.  In my econ class, maybe 10% are women.

Usually, I don’t think in terms of men and women.  I’m just doing what I do.  It’s like when someone asked Golda Meir how it felt to be a female prime minister and she said she didn’t know because she’d never been a male one.  But the more I get into the tech scene, the more I want to know why.  Why were all the women in the beginner sessions at the conference?  Why is there still a gap for men/women in business school, law school, and the sciences?  Why is it that when we have a group meeting at work, do all of us women stand and all the men sit down (I’ve been consciously working on changing this for myself)?

Most importantly, why are women still spending most of their time online in pink ghettos like BlogHer, Forbes Woman, TheStir, The Knot, The Nest, Pinterest,etc. etc, while men are building profit-making software, talking about economics, and building beautiful data visualiztations, not to mention going to blogging conferences and learning about WordPress so they can make money off women who don’t know how their blogs work? Why are women still letting themselves be organized in panels called “Social Media: A Woman’s Touch?”

I don’t know what the answer is for everyone.  I think part of the problem has to do with the fact that women are biologically wired to be the primary caretaker of children, no matter how unfair it seems sometimes, so that automatically takes us out of representation at the places we want to be.  It’s hard to spend a whole Saturday to yourself learning about WordPress when you have to take care of the family, or when your attention is on your son’s doctor’s appointment.  Although, lots of men with kids were there.  Because their wife was at home with the kids. The other part of the problem, at least for me, is that we, as women,  maybe both have a bias against math/science and are socialized differently than guys.  Although plenty of  male authors (who are published more than women, by the way) seem to avoid it.

The other reason is honestly, and not to sound like Barbie, math is hard.  While studies have disproven the fact that math is harder biologically for girls than for guys, for whatever reason, girls are still not going into tech and science in the same way that men are.  In America. In other countries, there’s more parity. Part of it has to do with the way we’re raised.  Part of it has to do with the way we’re wired.  Even though I am all up in tech, I have to go against all of my own talents and skills in writing, socialization, and the arts (perfect skills for blogging) in order to do part  my job, which involves writing code and making sense of large amounts of data.  I specifically chose this job and this field because I want to challenge myself to work on this instead of resting on my laurels as a writer. But then, why are men at the top of fields like literature and journalism as well?  I don’t know.

What I do know is that women that are interested in changing this need to climb out of the pink ghetto.  We need to be going to industries and jobs that are male-dominated, because that’s where the money is. We need to be blogging not about being a ‘mommy’, or shopping, or fashion, or makeup, but about math and business and  stuff. But no need for the content to be boring.  You just have to know how to apply the right angle. Why not shopping AND math?  Why not your kids AND economics?  We need to be rolling up our sleeves and learning how our blogs work. Differentiate yourself, both in your blog and in your career.  Because as soon as you start doing something that all other women are doing, you start losing credibility and money.

So, if you blog, start going to blogging conferences.  See how your blog works, check it out under the hood.  And do the same thing with your career.

Here’s the part where we get to the comments and you tell me whether I’m right or wrong and how we can fix the pink ghetto: