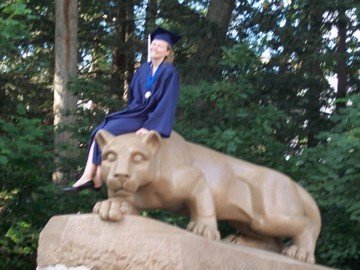 I recently read The Art of Fielding, the new IT novel of the year by editor Chad Harbach. It chronicles the college years and the emergence into adulthood of three baseball players who turn around a struggling small college team.  It also includes the characters around them: the university president, his obsession with Moby Dick, and his daughter.  It’s a very good, fast-paced read that gives a real insight into human nature, and of course, being a shortstop on a scandalized college baseball team.  Fielding turned out to be surprisingly relevant in the wake of the football scandal erupting at my alma mater, because it helped me to understand the passion of people who love sports, which has been hard for me to understand.
I would wager to say that at least 75% of the people who choose to attend Penn State do so because of its legendary football program.  The fact that we are consistently on the list of top 10 party schools doesn’t hurt. But that’s not why I chose it.  I went to Penn State because it offered me the most scholarship money, it was the cheapest school, and it was far enough from home, but not too far.  I never attended a Penn State football game, and I never got school spirit or Thon, which, to me, always seemed like a very flashy way to make cancer research about the students rather than the actual kids.
To me, Penn State was the fact that I could go over to my Hebrew professor’s apartment and talk about Bedouins for hours while he made Turkish coffee, and the gym at 5 am before class. It was the business building where I worked in the economics laboratory and the bellydancing class where I met one of my best friends. It was the smell of books in the economics department building on a cold November day. It was the fact that Mr. B’s roommates had thrown my shoes out the window of his apartment building during a snow storm. It was my first taste of jungle juice (Never again) .
So for me, the scandal  is as far away as college itself.  Why does it matter who got let go, as long as the truth comes out in the trial? Who cares how it’s being portrayed in the media?  Why do people feel the need to write page-long rants on Facebook about why someone is not guilty or dissect every minute aspect of the trial? Why are people so dramatic about Joe Paterno? He’s just a man, not a god.
The more I thought about this question, the more I realized that everyone has their own idols. In Fielding, Mike Schwartz, the philosopher catcher, is shortstop Henry Skrimshander’s idol and the driving force behind the entire team. But, as the book unfolds, we see that Mike is deeply flawed, and once you unwrap the wrapper,the glory, the hero, all that’s left  inside is a man or woman.  They may be a legend at sports, but they are guided by the same decisions we all are guided by in their personal lives. For me, the first time I realized that people are people no matter how much power they have was in high school when I learned that Golda Meir smoked AND didn’t spend a lot of time with her kids. Heroes aren’t supposed to smoke. Or make mistakes.
But what frustrates me is that people don’t see Joe Paterno as anything but, and the Internet is now full of the cries of my fellow alumni saying he was wronged and that they’ll show up at the next football game to support the university, as if the university is going to fall apart without him. As  in post-college America, the heres at Penn State are the football players and the coach. The scandal is getting so much attention not because children were harmed, but because Penn State football is huge and brings in the money and Paterno was the facilitator of that and people are blindly decrying the fact that he was wrongly made to retire just because of the fact that he led the football team to victory.  I am 100% sure if an award-winning professor were in the same position as Joe Paterno, the problem wouldn’t make ripples past the State College community and he would quietly go away without a second word.
So I guess what’s really bothering me is that people, including the media, the Board of Trustees, and everyone on Facebook and Twitter, are not acting rationally or logically, letting the passion of the holy trinity of American football, blind hero worship, and money, carry them to scary conclusions and hysteria.
All I can say is that I am disappointed in a number of things, the fact that Chard Harbach finished his novel before this scandal gave him more inspiration being one of them.
☰