A guide to trolling Jewish organizations featuring my grandfather

Mr. B and I were visiting my grandpa, last weekend.

After he was done telling us that one Rabinovich joke where Rabinovich is dying and his cheap family in Russia sends his family in America a telegram.  “Rabinovich is dead.”  “Oy,” comes the telegram reply, he turned to us and asked if we wanted any shmendrickeli. Shmendrickeli is not a real word, but one my grandpa made up to refer semi-scornfully to stuff he doesn’t like.  Shmendrikevich is the human counterpart.   My grandpa has so many half-made up portmanteau Yiddish and Russian words that I totally thought he was trolling me when he told me that Aldebaran was a real star up until I took astronomy in college. I believe at one point he also told me that Yasser Arafat was a constellation.

Shmendrikeli in this case mean packed boxes of dry non-perishable food from the Jewish Relief Agency, which delivers food to all of the elderly Russian Jews that live in the same apartment as my grandpa and all around the region.

Now, I don’t know who’s managing what over there,  and I’m sure the organization has honorable intentions, but whoever it is needs to reevaluate their assistance program to elderly Russian Jews in the Philadelphia area.  Because all the food my grandpa receives, he passes along to us because he thinks we need food.  We’ve gotten similar packages of food from Mr. B’s grandparents, and from Mr. B’s other grandpa as well, because they are worried about us. These are people who have survived World War II in Uzbekistan and Siberia, and they are worried we don’t have enough rugelach.

As a result,  every time we go visit the grandparents it’s like a jackpot of semi-edible, non-perishable kosher products. 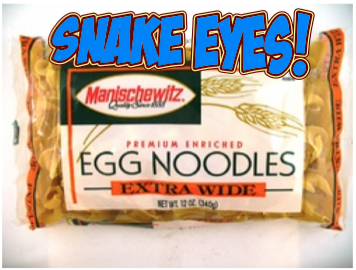 We try to refuse.  We beg. We plead.  We argue that there are people who need it, rather than us. But in the end, we have four packages of kosher egg noodles in our pantry.

Sometimes, the food comes to us in a roundabout way, from my parents or Mr. B’s mom.  And thus, the packages of egg noodles are passed down, l’dor v’dor, from generation to generation. I suspect our children will lovingly also not be eating them but cherishing them like relics of a simpler time.  “This is the package of matzah balls from the Great Grandpa Purge of 2008.”

We keep meaning to investigate into a food pantry around our house that we can donate to, or actual needy people, but the one time I looked, the food pantry was actually not accepting whatever we had, which was, I believe, a bounty of pre-made, pre-packaged gefilte fish.

Needless to say, no takers on that one.  Not even Yasser Arafat.