I cannot believe this Sunday was 10 years ago.

I was 15 years old and stupid. But more dangerous than stupid, I was ignorant.

When the first plane hit the tower, I was in study hall, and our study hall teacher turned on the TV.  I thought it was a movie or someone overreacting to something, and I went back to doing homework.  I had an exam the following week in a class I now don’t remember, and I was studying; I couldn’t get distracted. The next class was science and our teacher had the TV on.  It was hot and hazy in the classroom, and she was saying that she had family that worked in New York and she hoped everyone was alright.  One of my classmates was saying that her dad maybe worked at the Pentagon.

In my favorite class, that afternoon,  Honors World Cultures, we had been assigned Guests of the Sheikh for our summer reading, which talked about Iraq in the 1950s and which is still one of the most influential books I’ve read to date.  We talked about how relevant terrorism was to what we were studying and how important it was to study world cultures precisely for these reasons.

After school, I had registration for winter basketball.  My parents were in shock, I think. I told them we needed to go to my middle school, where registration was taking place, because I was going to be late.  I still didn’t really understand what had happened to the country.  “Where are we going to go?  The country is in shock and mourning right now,” my dad said, in a soft voice I’d rarely heard him use.  Still, so what if the country was in mourning? I needed to register for basketball and I was late.

We drove to the school. The roads were empty. The parking lot was empty.  Our whole town was eerily silent.  I became eerily silent too, and felt a sudden urge to go home and be with my mom and dad together.  My dad sat quietly on the couch and said, “I’m going to New York to help clean up and look for survivors.” “No,” I said, and I got really scared.  I pleaded with him not to go.  For three days, I begged him not to go anywhere, because he was my dad, and because I was selfish and wanted him somewhere safe.  Not Up There, where there was chaos.

I still didn’t understand what 9/11 was.

A year later, I met Mr. B, but we weren’t dating.  Just people who knew each other casually. I really wanted Mr. B to like me because he was super-smart, and in college. I was still knocking around the small leagues in my junior year.   We were all at a table with our parents and relatives.  Our families were arguing that all Arabs were dangerous and should be looked at with suspicion.  Mr. B’s eyes got angry. “I know when 9-11 happened last year, the first thing I was praying for was that it wasn’t someone Russian that did it.  Because you know what would happen now?  The same thing that’s happening to the Arabs. Suspicion.  Stereotypes.  Difficulties.”  I looked at him, aghast.  He was the first person in my life, besides Mrs. Bej, who said we should be impartial to Muslims.  “How can you say that,” I yelled at him. “All Arabs are partly responsible for 9/11.  Don’t even compare it to Russians.  They should all leave the country.”

And it took me these ten years to understand it. And only today when they started talking about it on NPR, I got it.

Because you see, the thing when you’re 15 and have never lived in any major city, sheltered in the very depths of American suburbia, is that you think that people who live in cities are stupid and exotic for living in New York and Washington in the first place. You think they’re some unreachable reach and glamorous. And you think all Muslims are evil because you’ve never really met one, and you think in 100% absolutes, and Afghanistan is some faraway fairyland. And you think people that commemorate 9-11 are hokey and patriotic and lame and the songs make you cringe.

Mr. B and I went to the Pentagon Memorial last year after the Jon Stewart/Stephen Colbert rallies at the Mall.  I didn’t take any pictures except this one, because it seemed wrong. 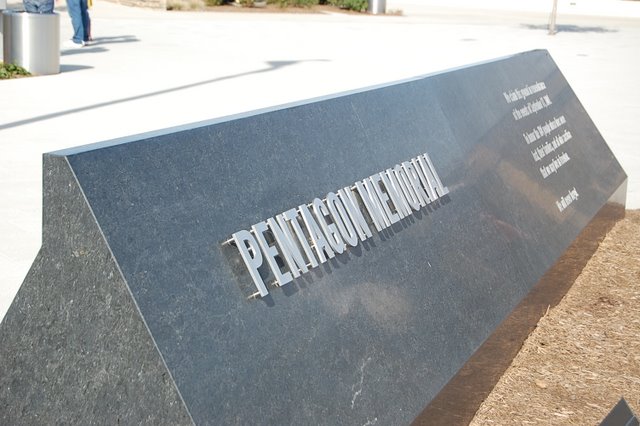 The Pentagon Memorial is very classy and quiet and thought-out and everything a memorial should be.  And I thought about how a terrorist attack had happened 10 minutes away from our then-apartment.  And about how I would feel if I didn’t get to say goodbye to Mr. B if something happened to him.  And I thought about how I felt in Israel during the war with Lebanon. And about how I never really thought of myself as American until recently, but how, after traveling so much, I was suddenly fiercely aware of my American idealism and optimism. And I thought about all the Muslims I had met, back from the time when I didn’t even know one, and how they broke all of my stereotypes open. An earthquake last week that was nowhere near 9/11, but definitely made me understand what it would be like to be trapped 42 floors up with nothing but a cell phone and a last call.  And all my life experiences mixed together. And I decided that I’m finally getting to the point where I understand 9/11 and why it’s a big deal, and not just because I now know people who have lived through it .

I’m finally not as stupid anymore. Still stupid, but not as much.  And I think, in a way, America has been through a lot of growing pains as a result of the last ten years, too.  As a Russian, I have to say that I’m pessimistic about our adventures abroad and whether we’ve learned enough to really protect our citizens and whether we’ll ever climb out of the monumental debt we incurred adventuring. But as an American, I’ll say that I’m very hopeful for this country and proud of the people that make it run, especially in New York.

There was an ad, sponsored by the sheepish government of Saudi, I think, that appeared in Time magazine about a year after 9/11 which I can’t find in Google Images, but which basically had a picture of a stove clock, neon green in the darkness of a comfortable American kitchen, showing 9:11 PM.  It said, “9:11 will never have the same meaning,” and it’s true. Every decade or so, it means something very different and multilayered, at least to me.