As you can probably tell, I’ve been a bit busy lately.

Yesterday, after a long day of work and school, I was complaining to Mr. B about how I don’t understand ANYTHING in class, from the moment the professor starts teaching, to the minute he finishes.  As a result, I am looking at notes like this that make zero sense: 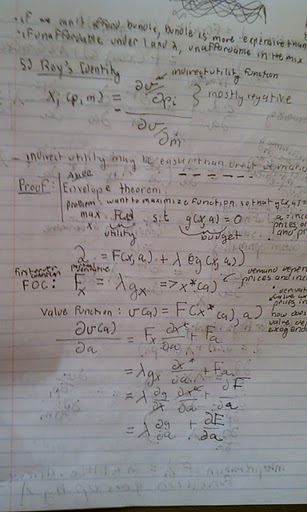 So I bitched to Mr. B for about half an hour in the car about how I was going to switch to an MBA because you didn’t have to do any real math, how I hated math, how, even if girls were not necessarily worse than boys at math, that I was, and that there was no point to anything.

We got home and decompressed by watching this really intereating documentary on HBO, which you can watch in full below, about a competition in Cairo where kids memorize the Quran by heart and have to recite parts of it for fame and glory.

Koran by Heart from MuslimCommunityTV on Vimeo.

One of the contestants, Ridhfa, was also a really smart girl in math and science and told her mom she wanted to be an “ocean explorer” when she grew up.  What made it heartbreaking was that she was from the Maldives, where there are no opportunities like this for little girls.  What made it even more heartbreaking  was that her dad had become Muslim fundamentalist and didn’t think the beautiful Maldives were pure enough for the type of Islam he was practicing, so he made a decision to move the whole family to Yemen.

There is one shot where you see the girl’s mom, obviously hoping for more for her daughter, saying “She wants to do math and science, so that’s what she’s going to do.”

In the next shot, you see the dad saying, “She’s going to be a housewife,” because that’s what his form of religion stipulates.

And then I started feeling more sorry for Ridhfa than myself. Because who does that to a little girl?