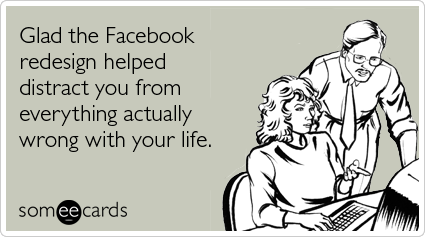 I’ve written before about how much I hate Facebook.

Not only do you never know what your privacy status is (I just assume everything I post is public), but, more to the point, it sucks you in.

I’ve been talking about it with friends who agree, and I stumbled across this website of a famous IT exec recently.

Life is pretty awesome when you live it outside. Get off Facebook, get rid of your TV, and go be interesting. Don’t try to capture your interesting moments in a zillion contrived photos; don’t try to hold on to the people you meet through some ridiculous virtual stamp collection; don’t broadcast a message to your friends to brag about what just happened.

I’m not going to go crazy and cancel all my accounts and get rid of my TV just so I can be one of those people that tells you they don’t have a TV, but  I’ve come to the realization that Facebook makes me anxious.

For example, I decided that Thursday last week was a beautiful fall night to smoke hookah with Mr. B. As soon as I decided it, I thought.  Oh, I should post a Facebook update. Or take a picture of the hookah and then upload it. Why did I want to let people know that I was smoking? Because I wanted them to think that I was cool, exotic, to be jealous, and to leave lots of comments on my Facebook page, which I would later refresh to check.

All of this was perfectly normal inside my head, but it sounds perfectly stupid if you’re actually talking about it. Are all of us really living our lives for Facebook updates? So we can get a few likes on a status?   Are people posing in certain pictures a certain way because it’s more Facebook-friendly? (Yes)

Or, my favorite is when I have something going wrong in my life and I leave a vague but anxious status up like, “Oh, man.” and “Studying makes me cry,” something to that effect, because I want people to pay attention and send me sympathy messages. It can take at least 3-4 minutes to craft a really good Facebook status update. That’s time that I could be writing my novel. Or eating the challah I bought last week before Mr. B gets to it.

I also don’t want to be jealous that someone is living a more glamorous life than me.  It gnaws away at me all the time, making me extremely unhappy.  I am just a boring suburbanite in Philadelphia, but here are people joining the Israeli army, traveling for business, taking extended vacations to Hawaii, being admitted to Harvard, and taking tours of Nutella factories.

Before Facebook, I was still a perfectionist and I knew in my head that there were people achieving things and that I should hustle and achieve things, too.  But my friends on Facebook make me feel completely inadequate. Not because they’re terrible people, but because the whole point of Facebook is to pull out significant but positive events in your life. Like, you’re not going to post “Just had to get two cavities removed and my gums bled. ” or “Found out I’m too fat to fit in my jeans.” or “This house is disgusting and I just found moldy bananas in the fridge.” Right? Everyone who is poor enough not to afford a computer and doesn’t speak English is also not on Facebook, so you’re not getting the really horrible stories that make you appreciate what you have.

So you have a biased sample size.

So what do I do? So I’m conflicted. Which is just what Zuck and the Gootch wanted.

People who are not on Facebook: are you happier?

Live your life as though it is the world’s best-kept secret, as though you are living in an amazing TV show with an audience of one.

And isn’t that what this blog is?