Two weeks ago I quit my old job, with many of the same feelings as I did the last time I quit to move to Philadelphia.  The position was perfect for the months I was in it, but it was time for a new challenge. I start my new, shiny, exciting job tomorrow.  And grad school starts on Wednesday.

And between all of this, we were still visiting Mr. B’s grandmother, who is recovering from serious surgery, in physical therapy, organizing my mom’s big birthday bash, taking care of the house, picking up my aunt visiting from Russia from JFK for a five-hour round-trip, worrying about my grandpa who fell and has to get a leg xray, and living in the personal hell that is Philly.

So, what do you do when you feel like you’re 55 instead of 25 and you’re exhausted from trying to field problems from all directions?

Take a field trip to Boston. Leave your house at 3 in the afternoon on a Sunday. Your house gets further and further away and you’re not flying out of the country, but you still feel a little bit like Paul Theroux when his train is speeding through England, to France, and eventually to India. Grit your teeth through North Jersey traffic so that you can watch the sun set over Manhattan. Feel amazed that you live in the United States and can see stuff like that.  Edge of Glory comes on the radio just as you are going over the George Washington Bridge, and you look at the water and the apartments and the skyline and you feel alive and like you’re 25 again. You haven’t felt 25 in a long time, probably since you left D.C.

You drive past White Plains and New Rochelle and all of a sudden you’re not in Westchester County anymore and the clouds swallow the sun and the gas station names are different but the feeling of gas stations on highways on Sunday nights is still the same and hurts only slightly less when you were making the commute a couple months ago.

Nighttime driving brings the rain, and somehow you’re plowing through waterfalls in your tiny Civic through the backroads of Connecticut. Whose idea was it to switch drivers so your husband could take a break? Oh right, yours.  The rain is so thick that you have to lean forward and clench your hands on the steering wheel as you break through wall after wall of water.

You see the sign for New Canaan, Connecticut, and due to your fascination with WASPS, convince husband that you just HAVE to stop there for dinner.  Troll the streets, pointing and laughing at non-ironic popped collars. Your sedan is not adequate here.  The only place  you are dressed for that is open at 10 on Sunday is a Starbucks and, starving, you scarf down a biscotti and half a sandwich just before it closes for the night. Feel anxious and ancient as you see the pre-teens with better cell phones and purses than you.   You get a grande cappuccino, because you have miles and miles to cover before you sleep.

You pass by the sleepy houses of Darien in the night and soon you’re on the highway again. You think you hear the roar of the Atlantic in the dark, and then the place names start becoming different.  Worcester, Leicester, Framingham.  You’re close.  Then, at 12 in the morning, bleary, you see the lights of Boston.

You’re only 6 hours away from home, but somehow you feel like you’re in the Great North.

You go to your hotel and collapse. Or take pictures. 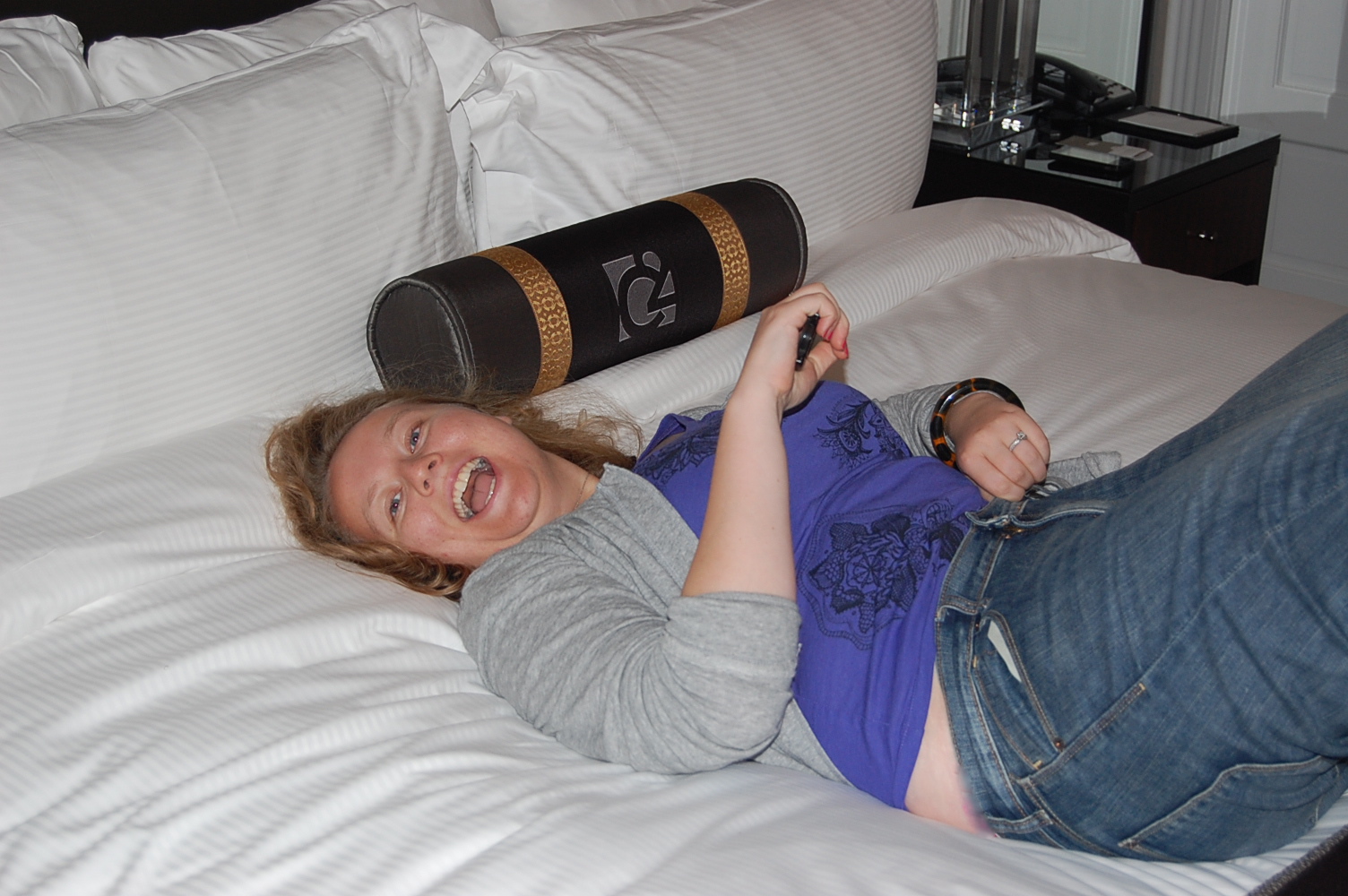 It’s a very nice hotel by the way, and you feel the need to switch into first, or at least second, person so this post doesn’t continue to read like one of those angsty pieces from Thought Catalog.

Here’s our room.  It comes free with a nice Jewish programmer of your choice. 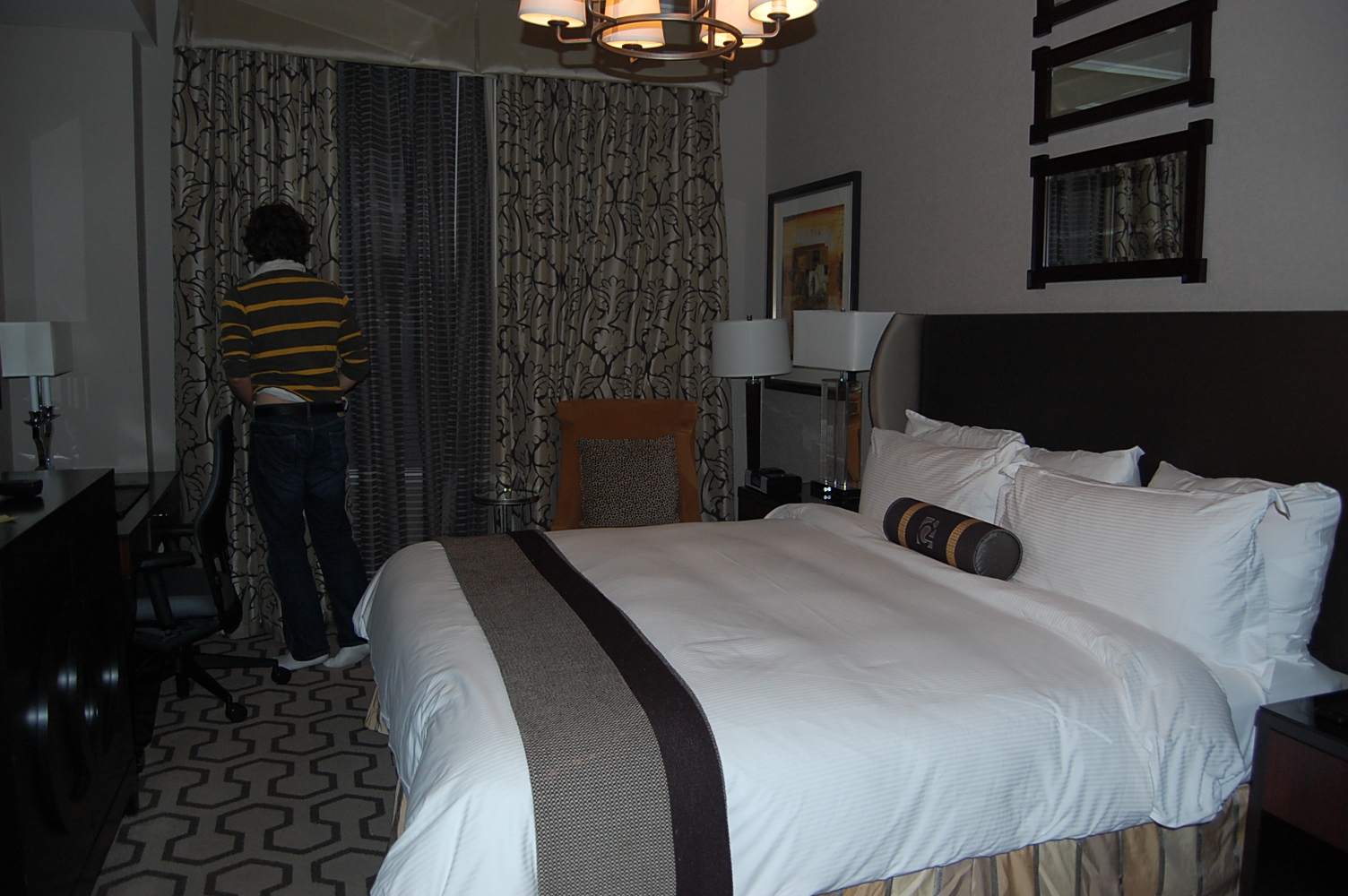 The next morning, we obviously woke up to rain, because, as you know, God hates me.  We were undeterred.

We went to this place for breakfast, and it’s just as awesome as you would expect, because it has both BOOKS and BREAKFAST. One of Mr. B’s vacation must-haves is an omlet man, or at least just an omlet, so we were satisfied.

One of the things that struck me immediately was how different Boston in general is from Philadelphia.  The big difference is that the people feel more college professor types than blue-collar workers.  I felt like I was back in D.C. I’ve really missed that type of atmosphere, because in the college/business type town, everyone is going somewhere, discussing something important, typing on their phones and laptops. The energy is very good.   Philly is more like an IHOP than a Trident Cafe, and it really frustrates me, because it’s so easy to become complacent in your job, your house, where you live, and to live the rest of your life in the same average way.  This idea, and the idea that I might buy into the idea of mediocrity it if I live in Philly enough is what scares me the most because I constantly want to be challenging myself.

Boston was a breath of fresh air.

We walked to Boston Common, where we were going to do an audio tour on my iPad, sharing a set of earbuds, romantically. The swan boats bobbed obediently in the rain.

But we saw the visitors’ center and decided we didn’t want to be That Couple and that a live tour was better.

This dude was our tour guide: 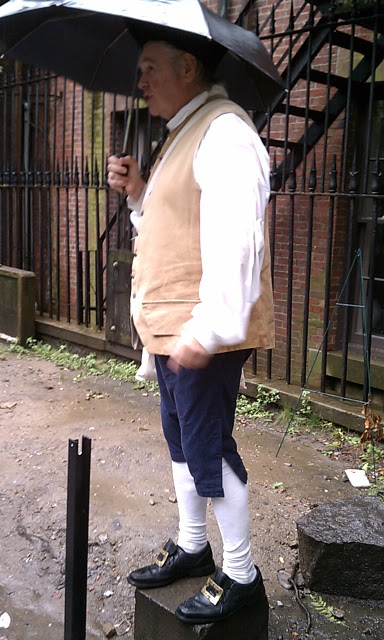 And he was AWESOME. We went all around the Boston Common, the cemetery, and a couple other stops on the Freedom Trail. 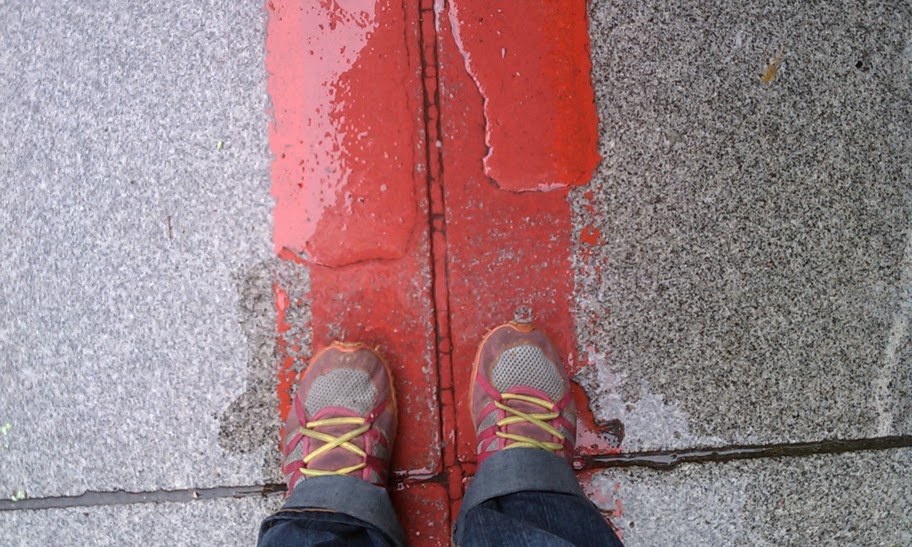 We were soaked but happy.  Mr. B and I love history, so it was really cool to be in one of the places where it happened the most in the United States.  I was really inspired by our guide’s explanation of what all the Revolutionary heroes did, and the Puritans that controlled Boston from the beginning, as well as how hard winters were in New England, and how different it was today.

The cemetery was actually really cool in the rain. 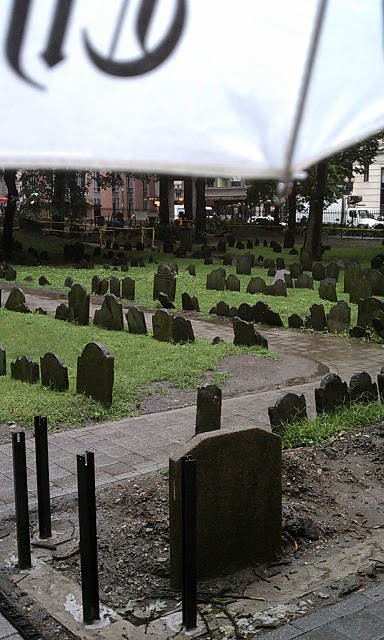 One of the funny parts is that Jews are everywhere.  Even Paul Revere’s grave. 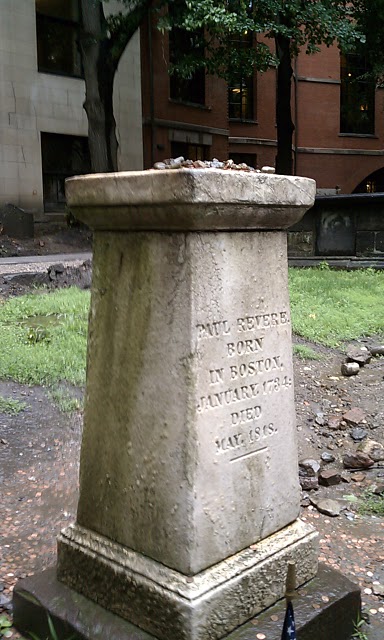 Then it started raining too hard to take pictures and the rain made me ugly, 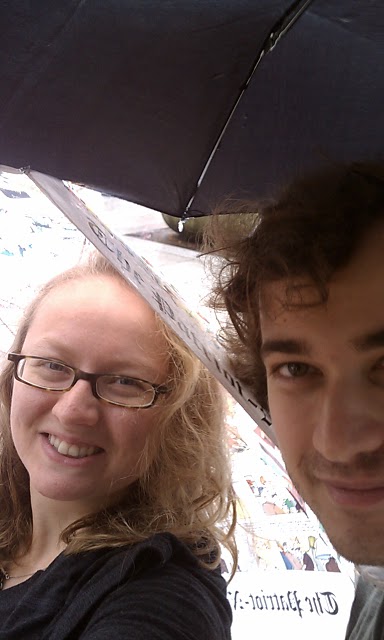 so we finished the walking tour and hopped on a bus to go around the city.

We saw a bunch of stuff, including this beautiful bridge (named after a Jew, OBVS), which reminded me of Jerusalem.

We hopped off and ran through the wind and the almost-sleet to this church, one of the most beautiful in America, supposedly.  It reminded me of the National Cathedral, where we had our engagement pictures taken in the garden on the side.

Then we went back to the hotel. Everything was wet.  We dried our jeans and shoes with the low-speed hair dryer.  Then we sucked it up and went to Atlantic Fish Company in the Back Bay, which is also, we learned, an engineering marvel, because when you’re in Boston, you have to eat fish.

Max Brenner is right next to Atlantic Fish Company so we contemplated going there for dessert, but by then, two restaurants in, two tours, and gas money,  I was feeling pretty Jewish and I’ve already been to both of the Max Brenners in Tel Aviv and the one in Philadelphia, so we decided to call it a night, eating Milk Duds in the hotel bed and reading USA Today to each other.

The next day, when it was still raining,  we went to MIT, which is the only place I think Mr. B is really amongst his people. His people are Richard Feynman and Marvin Minsky. Not because they’re Jewish. Because they are Scientists.

Before we went to the MIT Museum, we had a quick breakfast at a Middle Eastern place that had The Best Arabic Coffee on This Side of the Atlantic. 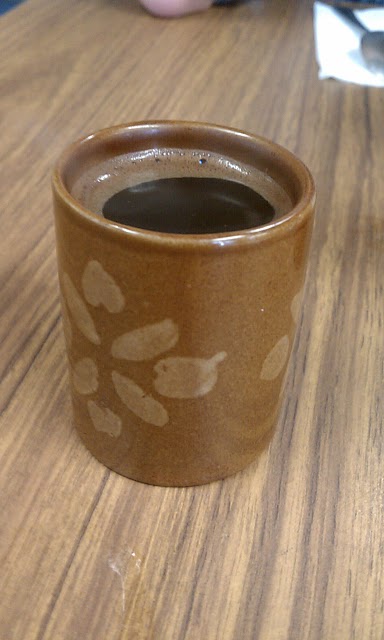 Also they have scimitars and stuff. 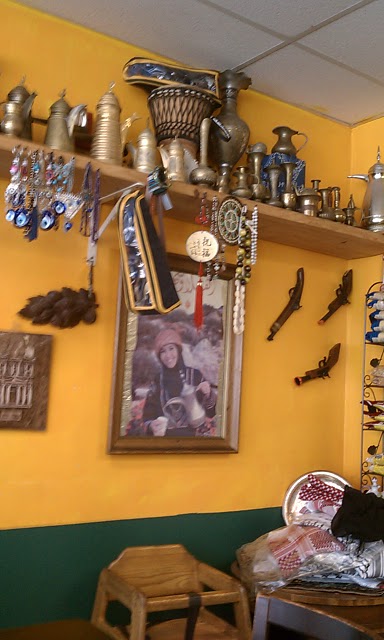 Then we went to the MIT Museum. But we really shouldn’t have, because every exhibit, Mr. B knew and explained better to me than I could. It was one of the times I felt really sad for him, that he didn’t go to MIT, which is the only place I think people have the same enthusiasm about learning science as he does.  I felt really sorry that he was not here in Cambridge and I was not at Georgetown, studying International Affairs and Diplomacy and that we were both not doing awesome things like we should have.  But then I realized we would have never met each other.  And I didn’t know what was sadder.

Then, it started to rain as soon as we left the museum, so we hightailed it home. We took I-95 South the whole way this time, hugging the coastline, passing through Providence, Rhode Island and Stamford, Connecticut, agonizing over the exits to Cape Cod.  Maybe next time.

We came back fresh.  There’s something to New England that, although it’s so close, it has an entirely different feel to it than the Mid-Atlantic.  It’s rougher, more ancient, more Puritan and more flashy with Connecticut’s Gold Coast, all at the same time.  There are more white, old church steeples and more cobblestones.

And it was exactly what I needed.