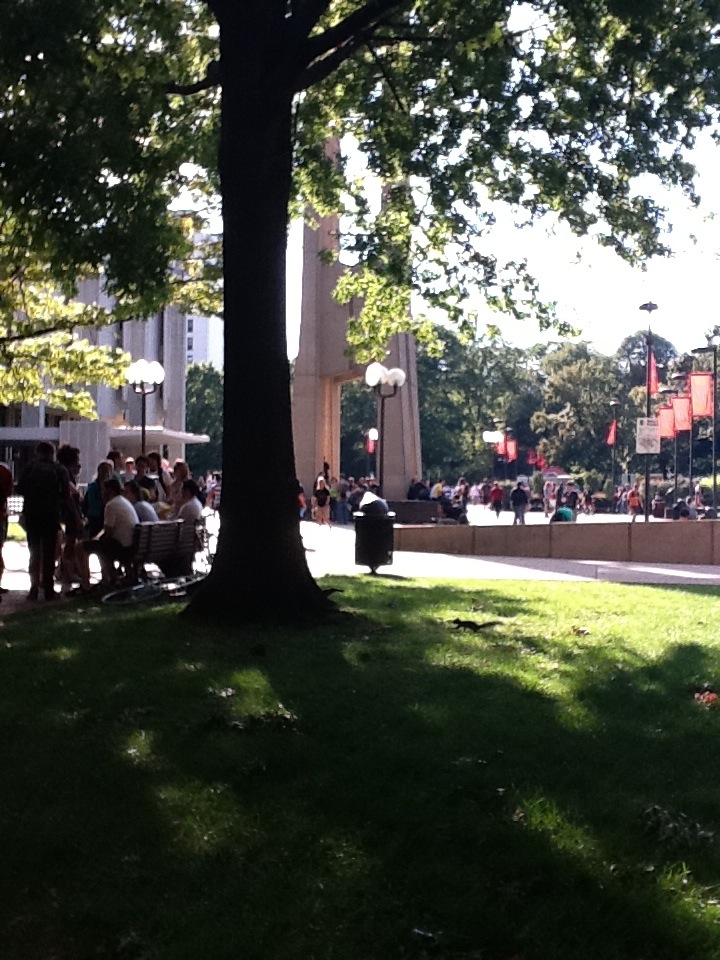 Grad school is hard. I know this because I just got back from my first class, Microeconomics, and the only thing I understood was the Academic Integrity Policy on the syllabus. Aka, don’t be shady.

Everyone in the class is in the PhD program, unlike me who would slit her wrists if she had to do anymore than two years,  and wears sweatpants and jeans and anime shirts.  I come in straight from work, buttoned up, hair up,  head still spinning with the data my team was presenting to our business client, who then presents the data to Senior VPs and division heads, so it absolutely has to be right. Plus I have the sinkhole problem still going on at home, plus I think today was laundry day, plus my boss is on vacation next week so I need to follow up with him before he leaves,  and my mind is drifting away before the class even started.

I ate dinner on the lawn in the 20 minute mad-dash between work and school, watching the undergrads with skateboards and bikes, laughing.  Life was good as an undergrad.  No work. Nothing to worry about.  Except, I stop myself halfway on the Choo-Choo train to nostalgia-ville because I was really stressed out in undergrad.  Not only was I trying to finish in three years, taking honors classes, leading in Hillel and Vice President of the Economics Association, but I also had boy problems, problems where I was super-lonely and had no friends, and problems where my roommate was half-Palestinian and I’d just gotten back from Birthright Lite. Or my roommate was Jewish and wrote bitchy things about me in a blog I only found out about the day before she moved out.  Or my roommate was Mormon and was terrified of me. Or I was homesick for my parents.  Undergrads don’t have it easy. They do, but the grass is always greener.

Everyone, like 90%, in the class is Chinese and male and super-smart, and I’m Russian but I was raised in American schools, so I’m American-stupid at math.  A girl from Bulgaria sits next to me and we become friends.  “I love math!  I used to do math competitions in high school.  Math is my favorite subject,” she says.  “By the way, I speak Russian, too.  Do you speak Bulgarian?”  I do not, and I HATE math.  Math is everything that is my enemy.  I spent about 40% of my middle and high-school career in my room, bawling because I didn’t understand, and frustrated that my math-oriented Soviet mom with a Math Master’s was frustrated that I didn’t understand.

The only reason I do math is because I can make more money doing it, and because it sharpens my brain away from atrophy.  If I could make money as a writer, I wouldn’t be sitting in this class right now. I’d be sitting in an MFA or Middle Eastern studies. But the people who sit in those classes generally start Tumblrs about their cats and are unemployed in Williamsburg.  Or, they’re, like, Social Media Experts. And yeah, I don’t want to sell my soul,  but it is nice to be able to go to Alma de Cuba whenever I want.

So I persist. I decide I will do all of my homework with the Bulgarian girl, forever.

The professor begins writing, and already my brain turns to mush.  The class is from 5:30-8 and by 6:30 I am already struggling to process what he says as he says it, because he moves fast and his hand is fluid with math symbols that are a foreign language to me.  Except foreign languages are easy. Arabic, Hindi, no problem.  Math symbols are hard.

I focus with laser precision on a thought, understand it, but by the time I do, he’s on to the next one and I figure I’ll just have to read the book for the next class. My mind wanders longingly to Mr. B. I wonder if he’s sitting at home, watching TV.  Like I could be. I feel sad that he’s alone.  But when I’m sitting at home, watching TV, I wonder who’s in grad school and why I’m not there.  I can’t win.

I watch the professor.  Well, almost-professor.  He can’t be making that much post-PhD.  Maybe I make more than him.  So what’s the impetus? Why do people do this to themselves?  Teaching snotty undergrads or us lame first-year grad students forever, scrounging out fellowships, living in the proximity of average universities.  The love of knowledge? The culture?  He could be making three times as much in industry. Also industry is fun, fast-paced, real. I feel the urge to work on his resume and tell him to negotiate a salary. Every time I go on campus, I feel like I’m in Narnia.  But maybe it’s not the campus that’s changed, it’s me.

By the end of the class, I don’t know much of anything.  Legrange, partial derivatives, it’s all a blur, even the second and third time Mr. B explains it patiently in the car. But there is another girl, also in work clothes.  “I’m doing a part-time PhD and I work,” she says, and I, in the words of my dad, man up.  If she can do it, so can I.

But I’m going to need lots of coffee.