My life has been pretty chaotic lately. New job, new school, new house, and, thanks to that whoreicane Irene, now we have a sinkhole situation in our driveway.

However, when I started reading The Magicians last week, I could feel the chaos melting away and I knew right away this book and its sequel, The Magician King, were going on my list of favorite books. 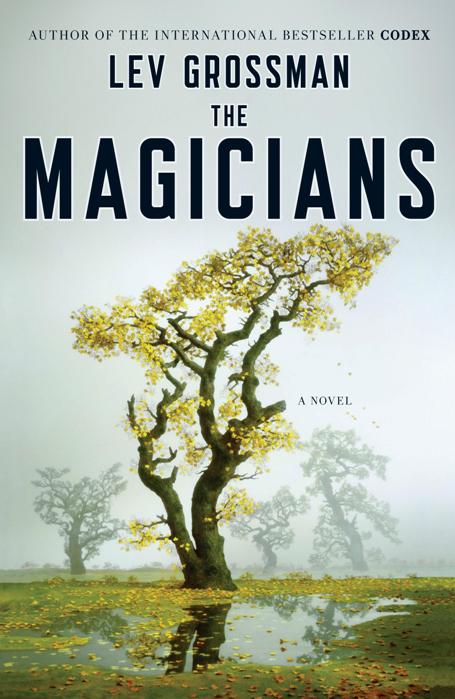 I heard about The Magicians when it first came out, but for some reason I wasn’t drawn too it; I think I thought it was going to be too dark.  It was also billed as an urban fantasy, a ‘grown-up Harry Potter,’ and ‘somewhat snobby.’  All of that pushed me away.

But then I got Kindle for iPad, The Magician King came out, and I thought it was time to give it a shot.

It is so rare for me to love a book that I’ve been in a kind of post-Magicians haze for the past two weeks.  Everything about this book and its sequel are perfect.  The plot is interesting, magical but not overly so, moves quickly, explores college live and the dilemma of the “quarter-life” crisis, but also what it means to want something, and the power of goals and consequences.

As soon as I started reading, I couldn’t put it down.  I love fantasy books.  But they have to be smart fantasy books, not the kind that are churned out by the hundred and have the picture of the fairy with wings on it, and they have to be believable.  Like The Hobbit, or Narnia, or, my favorite books of all time, The Golden Compass, which I’ve reread almost every year since I was 13.  I also loved, loved, loved, loved Jonathan Strange and Mr. Norrell (another not bad one is Elfland.)

The thing about a good fantasy book is, from the minute you open it, you have to feel like you’re along for an adventure with the characters.  You can smell the strange flowers, understand the constraints of the fantasy world and believe them, and generally feel excited that you’ve discovered a new universe.

Grossman gets you there right away.  You’re trailing Quentin Coldwater, which is a very WASPY and pretentious name for a very WASPY and depressed kid.  You think you’re going to hate him because he’s so mopy and inactive.  It’s Brooklyn in the fall and he loves a girl that doesn’t love him back, but her boyfriend is friends with him.  Quentin is a Huge Nerd and trying to escape Brooklyn.  You just have to know there’s somewhere better for him.  Almost right away, weird things start to happen/  There’s a strange portal in an abandoned Brooklyn garden, and your stomach is in knots: the chase is on.

He ends up in a school for magicians.  Like Hogwarts. Only, it’s unfair to compare The Magicians to Harry Potter because Grossman makes it all seem real, like you could attend.  And magic is not just waving your wand.  It’s intricate hand positions and knowing the phases of the moon and feeling it intuitively.  It takes weeks to work up to your first spell, and Grossman has you believing if you crammed hard enough, you could do it, too.

The thing I really love about Grossman’s descriptions of Quentin’s four years at Brakebills College for Magical Pedagogy is that, if you were a nerd and overachiever as a kid,  you can tell Grossman was a nerd and overachiever as a kid.  You can feel with the way he writes about Quentin’s struggles to get spells right and memorize Old Church Slavonic and Italian for certain chants, about the late nights spent making little marbles move half an inch on their own, that Grossman highly overachieved and stayed up late nights to overachieve.  You know because, as an overachiever, you’ve also put in the hours, going to bed at 2 or 3 in the morning to finish that paper, to get that 96, to be the best.  You know how 2 in the morning when you’re memorizing the periodic table feels.  And everyone at Brakebills is the same.

They’re also all cynical, smart as hell, and funny as hell.  I rarely laugh out loud when I’m reading, but every page of Magicians has a funny turn of phrase that made me highlight. The book is laced with dark humor and undertones and never dull.  You feel yourself going up with Quentin’s every victory, knowing that something greater (and perhaps more frightening) than studying and reciting him awaits at the end.  And in the scary parts, you’re actually scared.  Read the chapter called “The Beast” and tell me you don’t think about it for days afterwards.  It’s so well-written and psychologically creepy.

And once you get to the end, there is a huge payoff.  But then the novel ends.  But that’s ok.  There’s a sequel and all of the magic, the occult, the perfectly-written, humorous and flawed characters are there waiting for you.

What you also notice when reading both this book and its just-as-good sequel is how good of a writer Lev Grossman is.   There’s a rule in writing, I forget who said it, but basically, if you put a trashcan in the first chapter, it has to go in the last as well, about not writing extraneous text.  Everything in The Magicians is pertinent,so pay close attention. And everything is magical.