How to not be unemployed in a recession

We interrupt this blog for a SERIOUSBUSINESS post on economics.

I’ve been on Google+ for about two weeks now, and I’m really hoping everyone switches over from Facebook, if only because you can get quality conversations like this (and also for the animated GIFs) 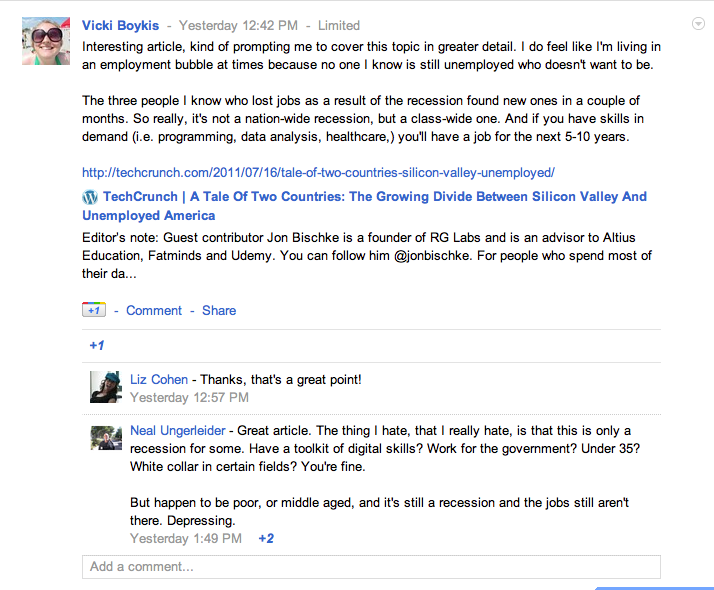 I came across the piece yesterday, talking about the recession and how there’s an employment bubble.  The author writes,

For people who spend most of their days within a few blocks of tech start-up epicenters such as South Park in San Francisco, University Avenue in Palo Alto or the Flatiron district in New York, last week’s jobs report must have created some cognitive dissonance. After all, we’re in aboom/bubble right? It’s really hard to hire good people isn’t it?

And I think, aside from that post and one last week by Megan McArdle, I haven’t seen too many mainstream media outlets discuss the fact that the recession is not affecting everyone equally.

Since Mr. B and I lived in DC for most of the severity of the recession, and since, thanks to our parents, we were able to afford to go to college and we picked majors that would guarantee us stable jobs, we never experienced the recession’s effects.

In fact, Mr. B was able to find four jobs from 2007-today, and I’ve been able to switch jobs once to move to Philadelphia, which is a much worse job market than DC.  All of our family (knock on wood) that wants to be is employed and even though three of my immediate family members were laid off in the past two years, they were able to find jobs several months later.  I have one family member that switched jobs just last week.

What’s my point? The recession is affecting mostly those whose job skills are no longer needed in the economy.  The manufacturers.  The print journalists. The artists whose skills are no longer necessary as businesses try to streamline costs.  And also those located in cities that don’t have big employment opportunities. Unless you drive a Russian ambulance.

And, as Megan writes, the recession is hard and unemployment is excruciating:

I was unemployed for basically two years between the time I graduated from business school in 2001, and the time I accepted a job with The Economist in 2003.  I was much luckier than most people in that situation, both because my parents let me stay in their spare bedroom, and because I was working during much of that time–freelancing, flirting with a start up, doing some tech consulting, and of course, working in a trailer at Ground Zero.  But none of these were permanent, and at the time, it wasn’t clear that any of them were going to turn into something.  I felt the isolation and the desperate fear of everyone who doesn’t have a “real job”, the people who don’t know how they’re going to earn enough over the next forty years to keep body and soul together.  I experienced real despair for the first time in my life.  And it changed me, permanently.

I’m not trying to make this an easy solution, because it’s not. If you’re older and at the point in your career, where learning technical skills would be harder than not, there’s no easy solution.   But I think many more people, at least those my age,  could stave off unemployment if they:

B) Continued picking up technical skills that translate (for instance, a summer project before grad school that I’m working on is learning Thesis for WordPress, along with PHP and CSS,  so my site can finally look decent in every browser since Netscape 000.1 .  I’m getting there with my front page and soon this blog will receive a minor facelift, too. )

C) Watching industries to see what’s going to be popular in the next 5-10 years (data analysis, anything in healthcare, education, and, of course, Teh Webz.)

D) Craft your resume to segue into one of those fields.  Were you an underwater basketweaver in your internship?  You worked in a fast-paced industry of textiles, multitasking between weaving baskets and learning how to breathe, and were able to complete X baskets on time and on budget. So far, I’ve helped at least four people change around their resumes to look more marketable, and I think, to date, three of them have gotten at least first interviews and one ended up changing his/her job.

So, I guess the major point is to constantly be on the lookout, to adapt, to read a lot, and to follow trends closely.  There’s no easy cure for the economy, but there are definitely ways to make yourself immune to at least some of its effects.

A rolling stone gathers no moss, and someone that’s always hustling will usually find a job. Unless you’re driving a Russian ambulance. Then you’re set for life.