How loud can you scream? Thanks to either nature or nurture, I found out yesterday!

A couple weeks ago, Mr. B and I were having a discussion about women that stemmed from this post wherein a woman got skeeved when an unknown-to-her guy in an elevator with her asked her up to his room late at night and then Richard Dawkins got involved and basically got all Male White Priveledge up on her in some comment section and it’s a long story but it boiled down to the fact that women are creeped out and on alert when they’re alone in elevators with dudebrahs and men don’t get it.

Basically Mr. B was puzzled that there was so much controversy and I told him, 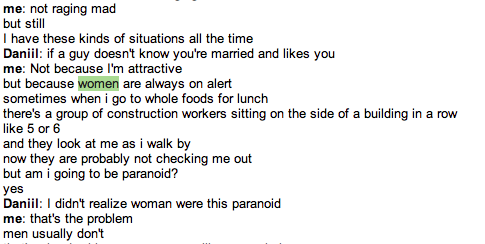 So I tried to explain about how women are always taught to watch out, have to be afraid in dark places, in crowded places, and in empty places because someone might jump out and rape us at any moment.  Whether this is justified is something I’ll get to at the end of this post.  But first, let’s talk about how Mr. B proved himself wrong.

Yesterday, I got home and put on a lil’ Desperate Housewives as background noise while I tried to put together a piece of furniture that came in the mail.  After about 20 minutes, I got bored and frustrated and, leaving the TV on so I could kind of hear it from a distance, wandered upstairs, to our third floor office to check my email and generally fool around on the computer.  As a reminder, here’s our office, and my computer is the iMac on the left and the doorway to the right of where I’m taking the picture from. 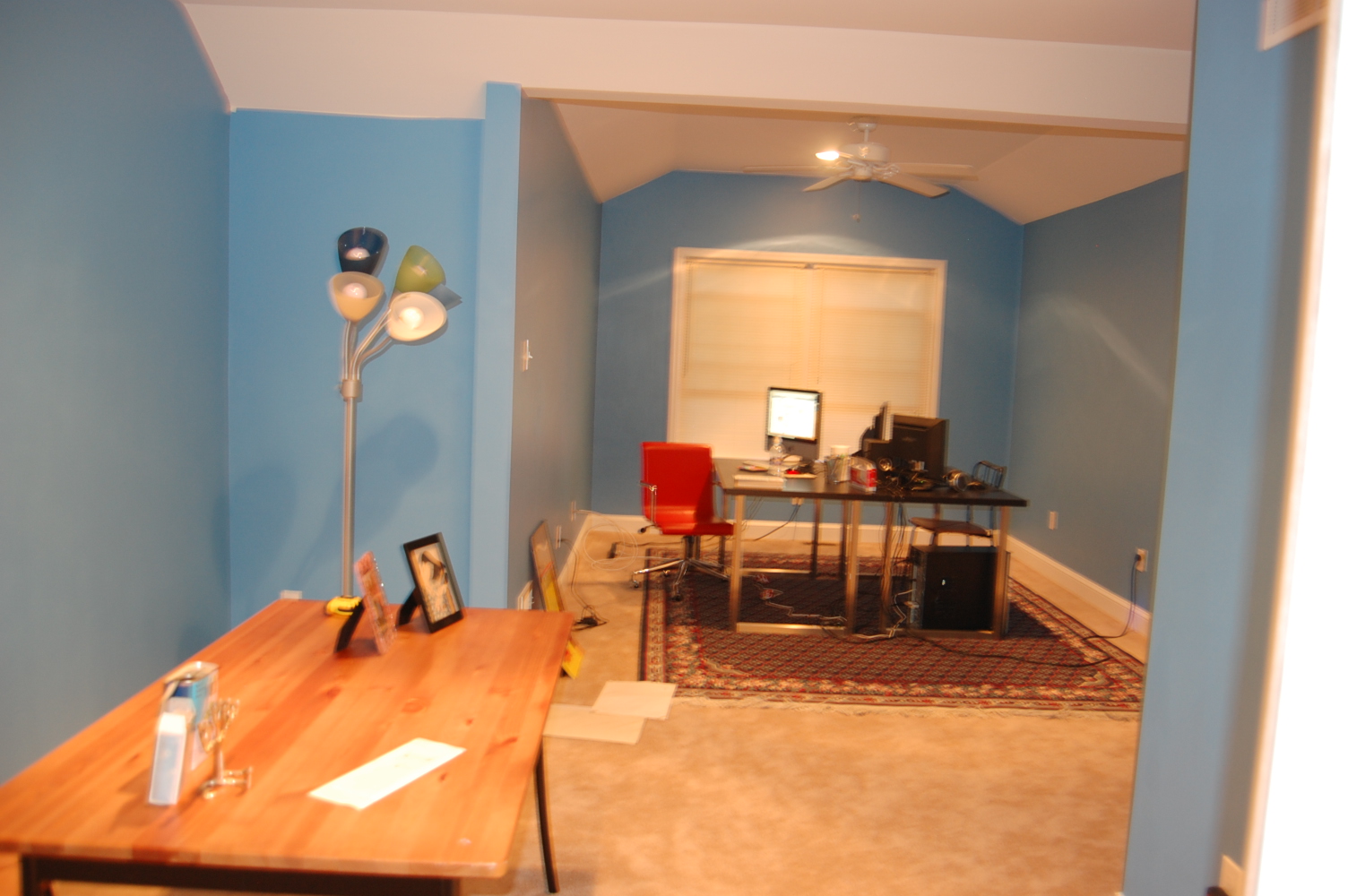 I was reading email, reddit, and other stuff for about 20 minutes, when I heard some subtle sounds in the distance, but thought it was just the neighbors or someone outside. I brushed it off and continued surfing.  About five minutes later,  I noticed a kind of moving reflection in the right-hand side of my screen,maybe a person’s t-shirt sleeve, but hard to say since it went by so quick.  The reason I noticed is because iMac screens are ultra-glossy, and the glare is especially visible on a black wallpaper, like I have.  I brushed it off for a second, and continued surfing, but the realization slowly and coldly washed over me that  it could have really been a person.

Immediately, I felt drained of the feeling that I was secure in my own home, and my heart started going overtime.  As soon as I realized there could be a person somewhere in the room that I didn’t see, these are the thoughts I had, in the exact order I had them:

Fifteen to twenty more second of silence that I just sat in the chair, gripping the pen in my right hand, ready to stab and probably have to overpower someone who was bigger and stronger than me. My heart is palpitating as fast as it can at this point, and all the color was drained out of my face. I felt for sure that someone was in the room beyond my line of vision, and my dread grew stronger and stronger.
Suddenly, there was a flash of movement in the corner.  I felt a spike of fear and adrenaline and gripped my pen tighter.   And Mr. B jumped out of the corner. 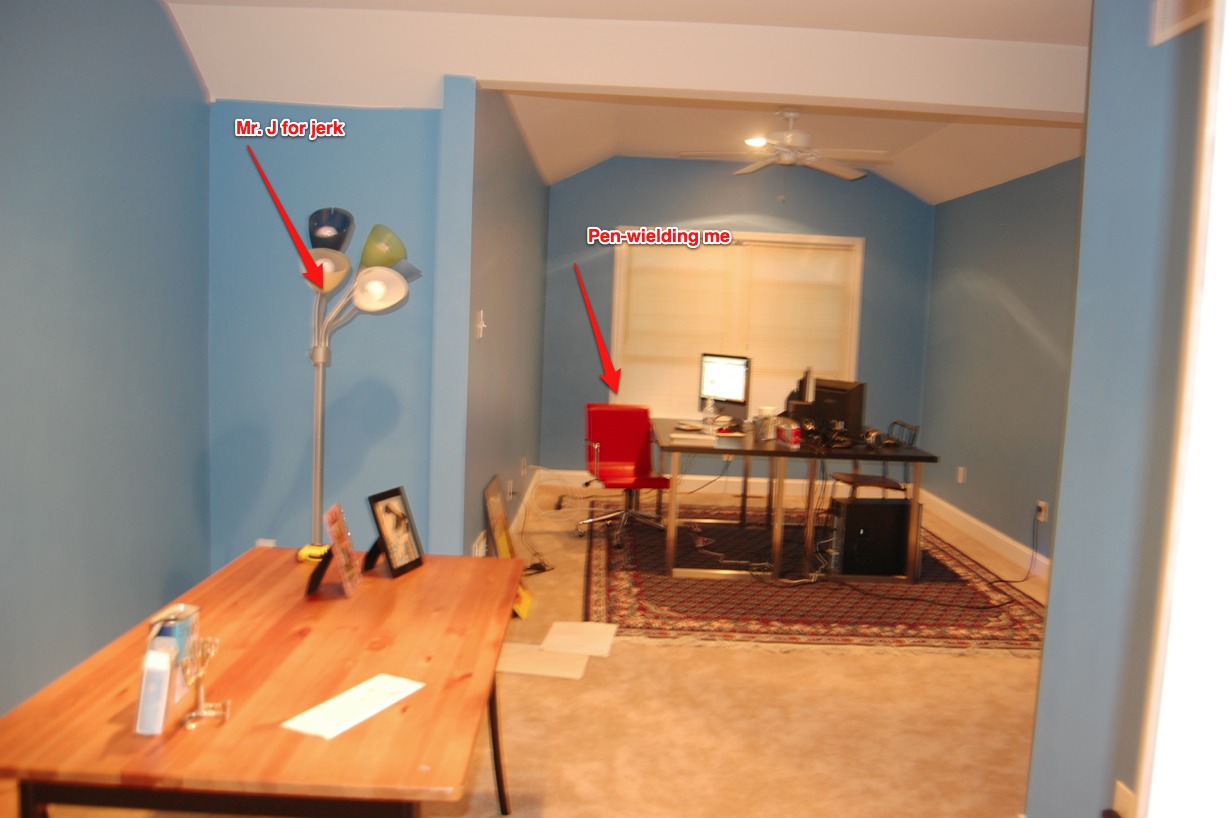 The first two seconds I didn’t realize it’s him, but then I did, but I still screamed at the top of my lungs for a good five seconds.  I have  never screamed so loudly in my entire life, and that’s not an exaggeration. I knew it was him, but I still couldn’t stop screaming as I was clutching this pen.   Immediately after I stopped screaming, I started crying from fear.

Mr. B clearly miscalculated, because he thought it would be funny to surprise-scare me.  Since the TV was on downstairs, I didn’t hear him come in, and  he snuck up.

“I thought it would be funny!” he explained after he cleaned his ears out.  But I was so shaken that I couldn’t even stop crying and he had to calm me down for at least 10 minutes, after which I finally came down and my sense of humor started returning in degrees.  He apologized about five million times.

I didn’t want to think about it for the rest of the night, but I do today.  About the role of nature versus nurture in telling women whether to defend themselves.  And I’ve come up with a good question in light of the whole blog/elevator incident and the fact that Mr. B accidentally found out how I’d react to a rapist:

Discuss in the comments!

And keep a pen next to you when you sleep. Because you never know.