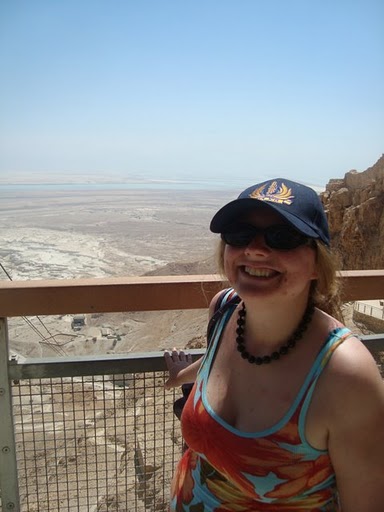 Thinking about the occupation, human rights, democracy, the demographic problem, and more at Zionist Massada. Or maybe just thinking that I'm getting sunburnt.

It starts the minute I read the first paragraph. That feeling of vague anger and helplessness. Because I’ve been reading and thinking about this issue ever since I decided that Israel was something I needed to be reading and thinking about. And I’ve been experiencing all of the things that Benedikt did for the past ten years, maybe more.  In different stages.  In different places.

The olives, the AIPAC meetings, the beach, the sunflower seeds, the 1967 maps, the rallies, the checkpoints, the walls, the 2006 war, meeting Sharansky, homeless people in Tel Aviv, the Wall, Yad Vashem, J Street, the Golan Heights. I’ve done it all. I’ve thought about every angle. I’ve thought, thought, thought. When I was on the plane. When I was on group buses. When I was in Hebrew classes.   When I was in hotel rooms, when I was drenched in sweat in apartments. When I was at my computer at work. When I am reading before bed. I’ve thought it this way and that way until my brain came loose from the see-sawing and took flight into a dream where I was speaking Hebrew on the moon and still thinking.

But at some point, I’ve stopped thinking. Because American Jews like me and Allison think too much. We are a nation, a tribe of over-thinkers, over-complicator, justifiers, neuron-processors. We like to hem and haw and on the one hand and on the other Israel until we are worn out.  We love to write angsty pieces and to have thinktanks and psychosessions.

Because no matter how hard we think,  all those problems will still be there.  And we don’t need to address them. Unless we live in Israel. And pay taxes to the State. Then we can sit in coffeehouses and debate thewallsettlementspeaceprocesstwostatesolutiongaza until our Turkish coffee embers run dry and the tide comes in so that we can walk from Tel Aviv to Yaffo in the shoreline.

So, sometimes, actually, most times, Israel is just Israel. It’s not a grand conspiracy designed to give you angst forever.  It’s just part of who you are as a Jew. And it just is.

American Jews, I am giving uspermission to stop trying to understand our relationship to Israel.  Stop thinking of army helmets and prisons and double-meanings.  Israel just is.

Israel is just a fruit shake, made out of milk and strawberries that you’re drinking on the beach.  Israel is the soldier in the supermarket that tells you you have sunburn and you should put on lotion.  Israel is the bread at Abulafia. Israel is a little girl in a dress running to her mom, who’s not thinking about the conversion bill, but what she’s going to make for that little girl at dinner and then she needs to go to the store for some milk. Israel is the Banias waterfall, and the falafel place in that suburb outside of Jerusalem that you always go to.  Israel is people trying to make money the same way people try to make money everywhere, and Israel is a girl in a bikini just trying to get a decent tan.

What makes me frustrated about these types of posts is that some Protestant but not really Protestant anymore agnostic atheist post-modern hipster in Brooklyn will read this on his Macbook, sipping his latte, and make clucking sounds at all the appropriate and right moments.  And he’ll process it, and then read all of the comments by the Jews who were like, “Me too! Me too!”

And then later that night, he’ll go to a party, and someone will bring up Woody Allen and inevitably the Occupation and the hipster will say, “Oh, I just read an Awl piece about Zionism, and apparently they drill it into all the little Jews. Can you imagine?  That’s so crazy! But then they grow up to be normal, well-adjusted thinking adults.  And it turns out that Israel is something you have to think very hard about. Because they do. If Peter Beinart and Allison say it, it must be true.  Jews are conflicted and tormented. ” And then the hipster-chain will activate and continue to share.

I used to be.  But now I’m not.  Thinking hard about Israel is an American Jew’s martyrdom, a form of self-flagellation. And we want people to know that we self-flagellate. Because it makes us look good and moral and fair and balanced.

The last time I was in Israel, with Mr. B, sometimes I thought hard about all of this stuff.

Not Israelis.  Not Jews. Just people.