I Almost Died for a $250 Discount on an IKEA Chair

Life has been a little boring around Philadelphia. I mean, sure we have a new house, new car and I’m starting grad school in the fall, but there hasn’t been anything REALLY exciting happening like there was in DC.  So I decided to spice things up a little. Because, is life really worth living if you don’t appreciate the thin line between life and death? 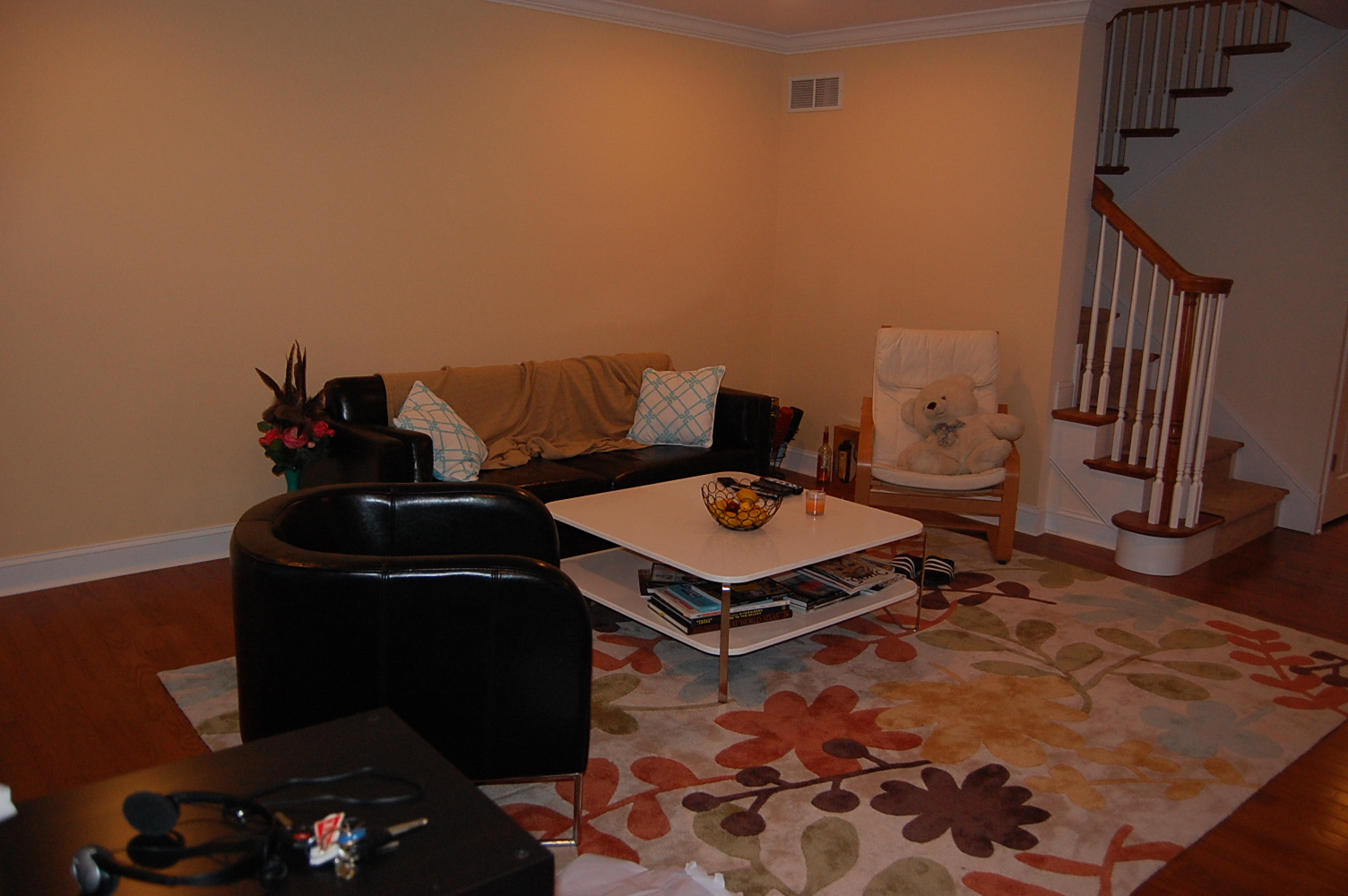 And, as you can tell, it doesn’t really match anything in the living room and now that I think about it, my bear is kind of creepy, too. So my biggest first world problem last week was to find a matching leather chair to balance out the other two leather chairs that we have. Remember, Russians love leather.

Mr. B and I went to IKEA, where we saw that the POANG chair was available in leather.  However, it costs $200 and the footstool is another $100. And you know me.  There’s no way I’m shelling out $300, especially at IKEA where I expect to have to reassemble the chair at least five times a month using an allen wrench and some of my own minor bones because the screws they include don’t fit by a couple of inches.

So you can imagine my excitement when I saw the POANG leather chair PLUS tuffet on Craigslist for $50.  The photo looked ok and the ad mentioned that the bottom was a little scuffed up, so I was trying to figure out what the catch was.   And then I saw.

The chair was for sale in West Philly.  Now, some of you well-versed in American pop culture may know that West Philadelphia is where The Fresh Prince was born and raised.  Which makes it sound like a friendly middle-class neighborhood.  But the reason Will Smith’s mom sent him away from West Philadelphia was because the Philly crime map looks something like this: 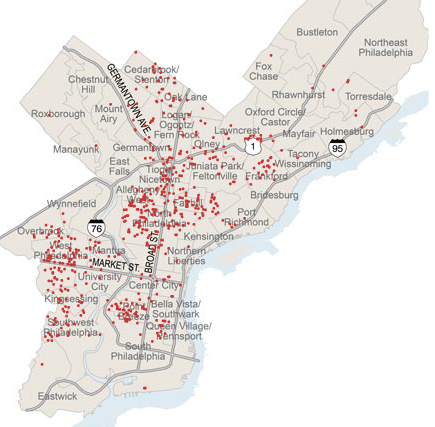 Actually, I just realized this makes it look like you should never go into the city of Philadelphia.  Which is probably true.

But anyway. Back to my story.

So,to be safe, I Google-mapped the address I’d be picking up the chair from, and I came up with this street view:

Which doesn’t look too bad, right? I mean, kind of sketchy, but not sketchy enough that a girl couldn’t go get a deeply-discounted chair.  So I consulted with a safety expert, after I found a couple pictures of the actual house on Flickr, which is where I edited out the link. 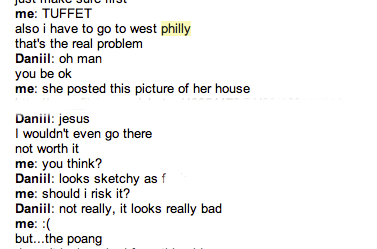 With that vote of confidence, I emailed the seller and said I’d be picking up the chair.  Note that I did this during the daytime (I left work a little early that day, which is why Mr. B couldn’t come along.)

So, here I am, female, young, in a brand-new car, alone,  headed to West Philadelphia, which some people who love the area describe as

“block-by-block. My street was wonderful. But, a few blocks over, where my cousin lived, there were plenty of boarded up drug houses packed with squatters.”

uhhh cuz my cousin got shot there?

Good thing I googled this up only after I went.

Anyway, so as I drive to the house, the neighborhood gets sketchier and sketchier, people on the street are looking at my car,  and soon I’m getting to the point where I’m seriously debating turning around, but I’ve already gone so far, and a $50 chair AND tuffet await me.  My Jewish instincts overpower my will to live.

I drive up to the house, park across the street, and text the girl, because I’m not sure it’s the right house.  Mainly because there is what looks to be a homeless man sitting on the stoop.  On another stoop across the street, a man sits and smokes and watches me.  I’m sitting in my car, waiting for the girl to text back, feeling like a creep, and also feeling like I probably should relearn self-defense.

She comes out of the house and waves to me, and I feel even more like an asshole for not getting out of the car.

She comes up to me and shakes my hand. “Hi, I’m X,” she says, shaking my hand.  “And this is Howard.”  He smiles a toothless smile at me.  She motions me inside.  I look back at my car with longing.  The chair is exactly as promised, only covered in dust since she is renovating.  The row house itself is gorgeous and has so much potential to be fixed up as a historical home, and it’s obvious that the owner has already put a lot of work into making the front beautiful. Unfortunately on the inside it’s 100% falling apart and it’s a good thing I’m not wearing flip-flops because holy tetanus.

Unfortunately, the house is located in West Philly and I’m afraid that any moment I’m going to have to call Mr. B and tell him that he either needs a new car or a new wife.

So, she helps me take the tuffet and chair out to my car and just as I think she’s standing there to help me load them, she says, “Bye,” and runs back into the house.

So here I am, alone, chair and tuffet out on the street, trying to load them into the car as quickly as possible while the guy on the stoop continues to watch me.  Howard seems to have meandered off.   I don’t try to position them in the back seat, I don’t try to lay them down in the best possible way, I just stick them in the car and go, go, go.

Two minutes out, I realize that I put the chair in in such a way that it’s blocking my entire rear-view mirror, and I not only need to get out of West Philly, but merge lanes on the highway, etc, to get home. Well, screw that. Because I am not stopping.  I floor it and rely on my vision from my two side mirrors to get to I-76, merge onto that highway, and then get home and take a stiff long drink.

Do NOT try ANY of this at home.

Unless you are Jewish and want a 71% discount on furniture.

But aren’t you dying to know what it looks like?

Here it is. Zaaaa, right? 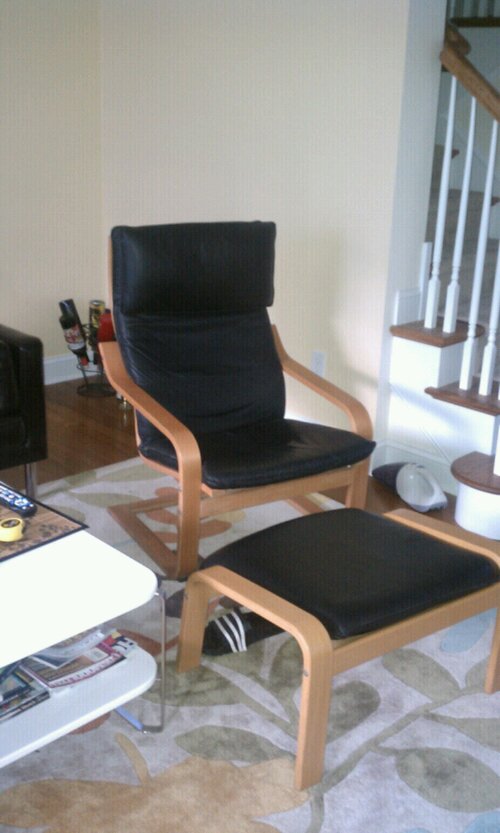 And here’s the entire living room.  Better, yes? (Just lie and humor me.) 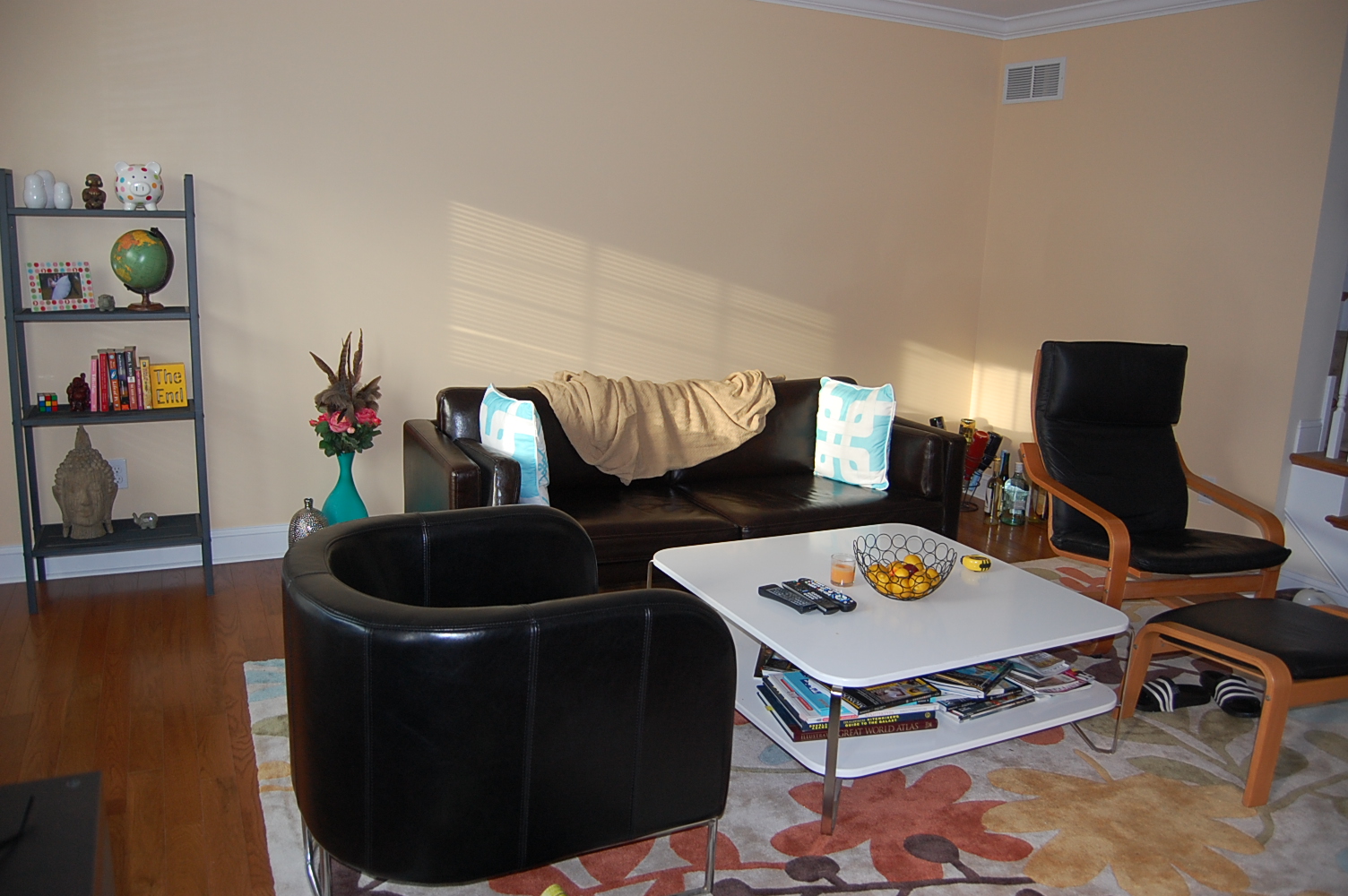 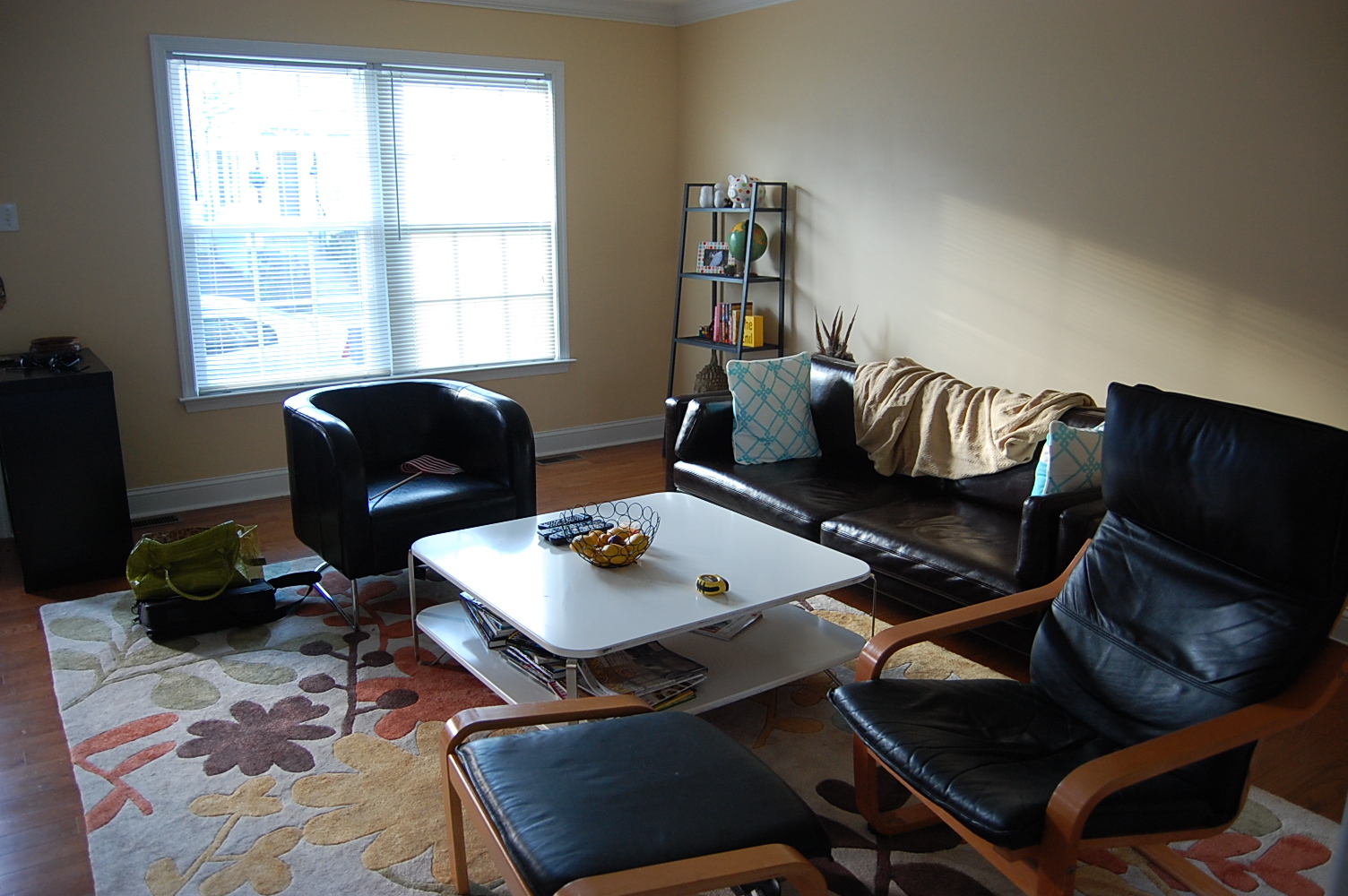 By the way, interesting story about the original POANG, which is now in our bedroom: 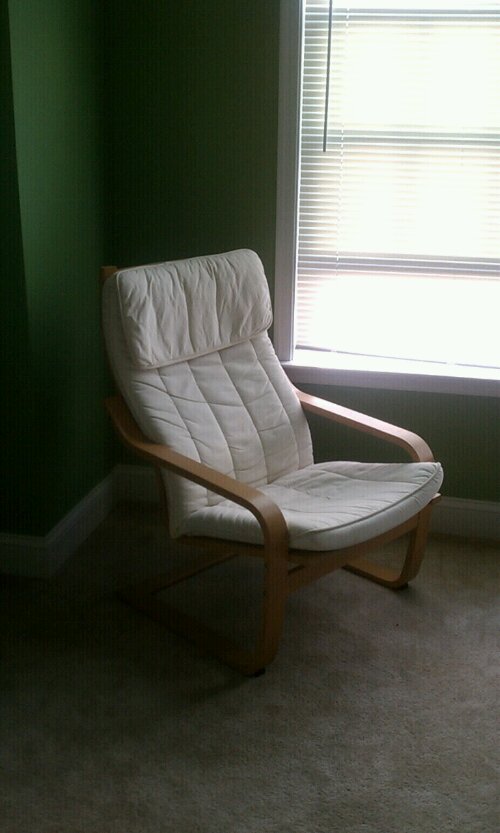 I got this one, also from Craigslist, but in D.C. And by D.C. I mean that part of Silver Spring where it turns from Nice Suburban Georgia Avenue into OHMYGOD It’s sketchy DC. Which is less sketchy than West Philly. But still.  But instead of going during the day like I did this time, I decided to go after work, alone (where is Mr. B in these situations?) Also, I had my Honda Accord, which meant that the chair originally didn’t fit.  So there we were, a small white girl and a small Asian girl, kneeling on the ground on sketchy Georgia Avenue after dark, un-Allen-wrenching the chair to make it fit in my sedan.

Other than the fact that I LOVE discounts on POANG chairs.