Mr. B and I were driving to Sam’s Club yesterday because we’re having some (upwards of 40) people over on Saturday and we needed ginormous-sized portions of everything.

Mr. B: Did you watch that link I sent you?

Me: No, because it has Noam Chomsky in it and you know he gives me spasms.

Mr. B: But Malalai Joya was in it.  I thought you might be interested in that part.

Me: Nah. But speaking of Afghanistan, I started reading this really really cool blog, it’s called Jalalagood. You know, like Jalalabad?

Me: Its tagline is “Adventures in Khyberspace.” KHYBERSPACE. It kills me.

Me: Anyway, so one of the posts is about this thing they have in Afghanistan, buzgashi, which is basically like polo on horses, except instead of a ball there’s a dead goat.

Me: Yeah, apparently it’s all the rage.

Mr. B: That is some f-ed up shit. Where would you have a dead goat lying around? Can you imagine?

Me: I’m guessing it’s pretty common in Afghanistan. Like, they don’t have too many balls over there.

Mr. B: Yeah, but can you imagine a scenario where you’re like, oh, we don’t have any balls, let’s use a dead goat?

Me:  Maybe the goat died of disease and they can use it instead of eating it.

Me: Not rabies, but like it was diseased enough not to eat, and they’re not letting it go to waste.

Me: Did you know there’s also yak polo? That’s my life goal.

Mr. B: That’s because you have Mongolian blood.  You know how I know?  You’re short, angry, Machiavellian, and you always want to travel somewhere.

Soon after, we arrived at Sam’s Club, and we pretty much had sensory overload, because holy hell. What’s interesting about Sam’s Club is that the portions are HUGE, and so are the shoppers.

Look at this jar of pickles we bought: 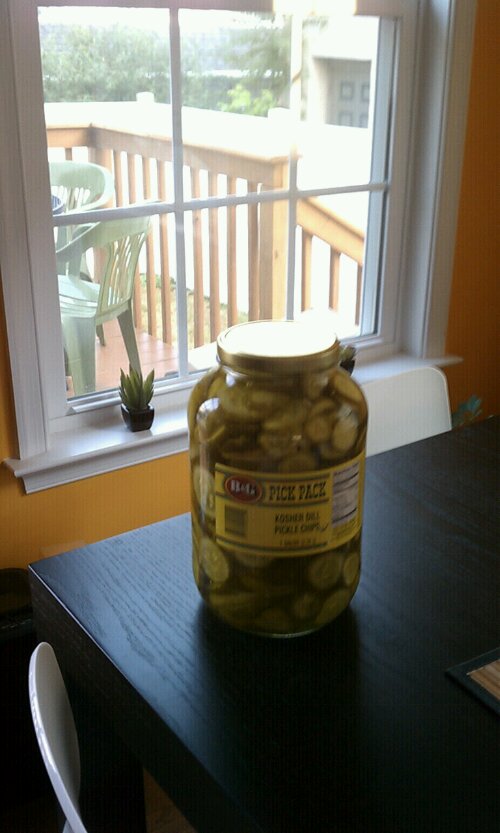 If we ate all the pickles in this jar, we would have enough room to fit a baby in there, Brave New World-style.  Or maybe a goat.