Yesterday, after watching the price of the Rogue move up and down over a year and across three states and even trying CarWoo (which is a great service but not one we had success with), Mr. B and I found a great price on the Rogue in Delaware, two hours away from our house.  We ran from work, skipped dinner, ran to my car, and I gnashed my teeth through rush-hour traffic to make it to the dealership in time.

As the sun was setting, we sped past signs for Delaware beaches and over the very cool Senator William V. Roth Bridge (“I’d trust it more if it were dedicated to Catholics,” Mr. B ruminated. “The Jews probably cheaped out on the bridge materials.”) I was still grinding my teeth, my heart palpitating at this point, pushing the pedal down and down to go 80, 85, 90, to make sure we got to the dealership on time, to ensure our two-hour commute wasn’t wasted.

When we reached the Dover city limits,  I finally relaxed enough to realize we were going to make it, and I started realizing that I would be trading in Erica, my 2000 Honda Accord. 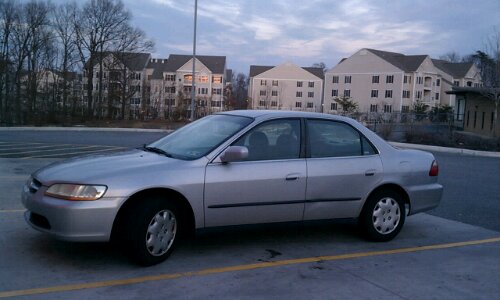 On one of our last trips to DC to visit Mr. B when we were living apart

“It’s just a car,” Mr. B said, but while we were signing the papers for our new Rogue, but it started pouring rain outside and my heart squeezed together picturing Erica, alone at the dealership in the rain, without me, abandoned, even though she’d been such a good girl.  I wasn’t ready to give her up, even though I’d been mentally preparing ever since I started the “New Car Fund” bank account over two years ago. 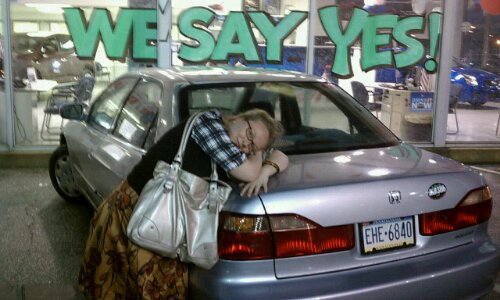 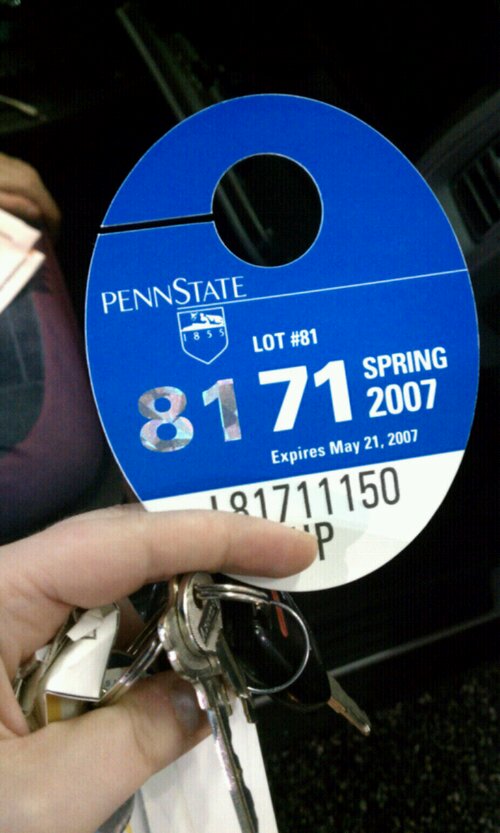 Trip down memory lane: parking pass from my senior year of college.

Erica and I have driven over 100,000 miles together, miles that started when my parents generously handed her down to me the summer after I finished my Bank HaPoalim internship in Israel.  We’ve driven countless hours to and from college, with furniture, with laundry, with a thermos full of my mom’s soup carefully tucked into the backseat.  We’ve driven on long, lonely stretches of dark road with the iPod blasting Mashina Vremeni when we were philosophical or sad, and we’ve driven with the iPod blasting techno when we were happy.

We’ve driven to DC, scared and alone, starting a new career, and we’ve driven from DC, career and husband in tow, boxes upon boxes in the back seat, back to Philadelphia.  We’ve driven with Mr. B and without Mr. B, in the snow, fog, and hail so big we’ve slowed down to a crawl, gripping the steering wheel, peering over the headlights into the end of the world.  We’ve driven when Mr. B and I were just dating, and a little bit broken up, and talking about getting engaged, then engaged, then married. When Erica and I drove together, there was somewhat of a hypnotic peace, a connection between me, her, purring quietly, and the wheel. A sense that I was in control, that I could go anywhere and do anything.  And Erica was quietly, reliably there.

Erica almost never gave me any major problems, but she was getting old and probably in a couple thousand miles, the problems would start.  We also needed a bigger car to be able to fit a bike rack and all the new accessories that come with a house, all the big boxes and heavy-duty bags, and Erica just couldn’t do it for us.

As we drove away from the dealership in the dark, I didn’t glance behind me to look at her one last time because we were both exhausted out of our minds and just wanted to get home.  I did snap this last picture of her, of a bumper sticker that she’s had for a while now. It says “As is my car, such is my life,” in a joking sort of tone, and when I bought it, I meant it ironically at the time. 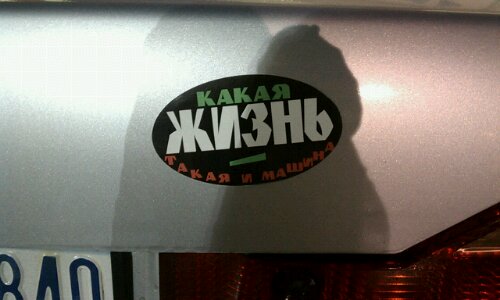 But now, I’ve come to realize that, really, Erica and the parts of my life that we experienced together were both great.

Erica, I will miss you. Even if you are just some steel all glued together, without any emotions. We humans have them, and it doesn’t make it easy.

Shahar, sorry, but this is going to take a while. 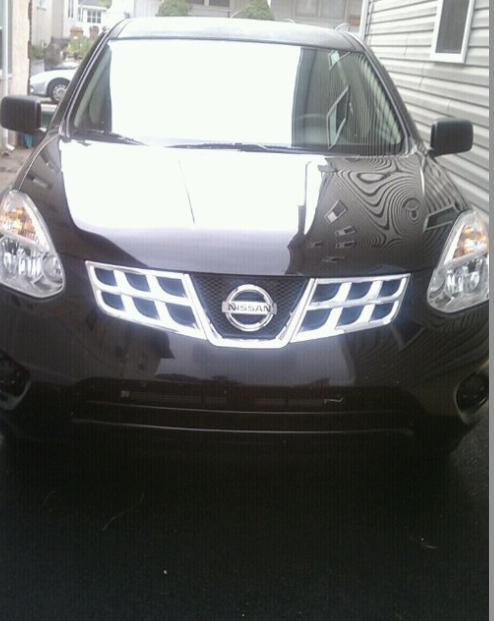