P.S. (It is P.S. if the P comes before the actual S?) If you’re stopping by because of the JTA 100, welcome. I write about my life which entails being Jewish, being Russian, being married to a Landau-type, economics, Nutella, international escapades, women, and sometimes Golda Meir. Here’s my last year in blog posts. Ch-ch-ch-eck it out.

8:03 P.M., Tuesday in early January, SKRUG.  Latin music is blasting and 25 women are making various aerobics-like movements so close to each other you can almost hear the eggs sweating in the ovaries of the woman next to you . 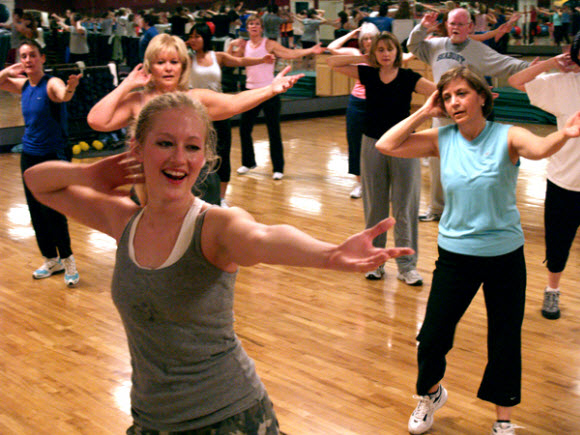 Not my class but close enough.

Why are all these people here? New Year’s resolutions? It’s ok.  They’re going to weed out in three weeks faster than my college chemistry class after our first exam.

_Why the hell did I take chemistry in college?

That gaggle of Russian girls my age standing to the left of me all look like Zvonareva. Also like they just got back from doing lines at a club. A club where it’s still ok to smoke inside.  And they’re looking at me like I look like Safina. Which, actually, I kind of do. Or possibly Vinny-Puh, who I more resemble at the moment, which is the reason I’m at this class to begin with.

_Damn, those girls are good at moving their hips.

I bet if I asked them about quantitative easing or  the five forces model they wouldn’t know anything. They probably don’t even know about my new fave author, Elif Batuman. *feels superior*

In reality, they are all finance superstars and make millions.  Also, they are all  friends with Elif.  They go on scenic Bosphorous cruises with her and discuss Tolstoy while drinking mimosas.

AND they can Zumba.

I hate my t-shirt because if I jump up you can see my stomach. No one needs to see that.  How can I jump in a more sexy and demure manner?_ Jump left, jump right, hands up hands down.

_Especially since everyone else has really nice workout clothes that fit their bodies pretty well?  I mean, I do too.  Have nice workout clothes.  But they don’t look as nice on me as they do on the twigpeople in the class.  Because no one over 90 pounds looks good in spandex.  Even my own mental image of me in spandex is bad.

Why do women that have great bodies go to the gym?  Don’t tell me it’s because not everyone who is skinny is healthy, blah, blah blah and that the point of working out is to feel good about your body.  The way I see it, I make myself go to the gym as a punishment for Nutella.

Ok, maybe lately, especially after I’ve been able to run three miles at a stretch, I’ve started feeling really good about what my body can do as opposed to how it looks.  But that’s not the point. The point is that there should be a separate gym for people who don’t look like they need to hit the gym. Haters gonna hate.

*tries to remember some of the lyrics, which are in Portuguese, so I can Google it and download it later*

The Zumba teacher is really good. I wonder what she does from 9-5.  It would be crazy if she were, like, a financial analyst. Or a dentist. Maybe Zumba is her full-time job?  Maybe she goes from gym to gym like a traveling preacher? I wonder what kind of career growth Zumba practitioners(?) have? Do they get raises based on the amount of songs they can choreograph?

This is getting hard.  We must be at the midpoint of the class. I wonder what Mr. B is doing right now.

Probably reading about cryptography or watching lectures on the Scala programming language, since that’s what he did over Christmas/New Year break.  This man is either going to win the Nobel Prize or I’m going to discover at some point that he was the inspiration behind Stuxnet. whirl, whirl

__I wonder what kind of jail computer hackers go to? Would I be a computer hacking widow?  I’d have to bring him bread and stuff, just like they did in the gulags.

The only problem with that is he is very particular about the kind of  bread he likes and you can only really get it at this one Russian store, so it would be too much of a pain in the ass for me to visit him.

Also, he only eats vanilla ice cream because the others are “too sweet”.  Can you imagine??? Just to like only one flavor of ice cream?  Stuxnet for sure. Arm Wave, walk left.

Oh. Why are we slowing down?  Is the class over?  Oh yeah, she’s putting the Bruno Mars song in.  The slow one. Wow! That class went fast.